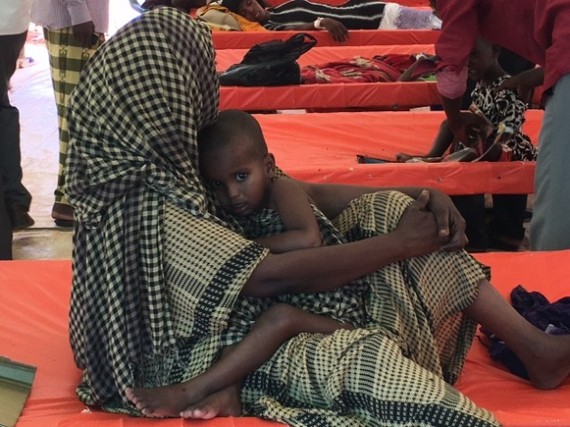 Mandera's double whammy, the concurrent outbreaks of cholera and chikungunya, is bringing to the fore the need for accelerated epidemic preparedness and prevention systems. Cholera is an acute diarrhoeal disease that can kill within hours if left untreated. Chikungunya virus is most often spread to people by Aedes aegypti and Aedes albopictus mosquitoes. These are the same mosquitoes that transmit dengue ,yellow fever and zika virus. Its symptoms include high fever, joint pain, rash and headache. There is no vaccine to prevent or medicine to treat chikungunya virus infection.

The twin epidemics have hit the expansive north-eastern county in Kenya, with half the population coming down with chikungunya virus infection. Since April, almost 1,103 cases of cholera has been reported in Mandera including 16 deaths, 3 being children.

For about 17 months, several areas in Kenya have reported cholera outbreaks, but the outbreaks in Mandera present special challenges in a region where one health worker serves about 2,000 people and half the population has no access to clean water.

Almost 80 per cent of the Mandera residents are down with the outbreak - which has adversely affected health care workers and the livelihoods of many vulnerable urban poor, especially women and children.

Even the Mandera county Governor Ali Roba became a victim of chikungunya and spoke of the "excruciating and intolerable pain in his joints" for nearly a week.

The current cholera outbreak, in Mandera has been worsened by the immobilized health work force due to chikungunya outbreak and hence slowing response efforts from the local capacities.

While chikungunya infection is often self-limiting and rarely fatal, the cholera outbreak is the more worrying, given the limited access to clean water and health facilities and a poor communication infrastructure that complicates efforts for tracing, diagnosis and isolation of cases.

There is a realistic fear that the outbreaks could spread to other regions, for instance in the coastal region if urgent action is not taken now. That would portend ill especially for the country's tourism sector that has just recently began recovering from a debilitating slump.

With half of Mandera's health workforce working at less than ideal capacity due to chikungunya infection, it is time for more hands to quickly be put on deck. The Mandera Referral Hospital is already overwhelmed by the sheer numbers of patients turning up with cholera and chikungunya symptoms.

Though the Kenya Red Cross and Médecins Sans Frontières (MSF), Switzerland have stepped up to bolster the county's health facilities to deal with the cholera outbreak, and support the Ministry of Health with response measures, gaps abound.

The array of needs was clear today, June 03, 2016 as a team composed of UNICEF, WHO, United Nations Office for the Coordination of Humanitarian Affairs (UNOCHA), the United Nations Population Fund, AMREF, Kenya Red Cross, MSF, government officials and the Intergovernmental Authority on Development (IGAD) led by the Cabinet Secretary for Health Dr. Cleopa Mailu visited Mandera East sub-county, the epicentre of the twin outbreaks.

As per reports the chikungunya virus was imported by infected travellers from Somalia. The team conducted a quick assessment to identify current response inputs and gaps, but more importantly to establish cross-border coordination links with partner agencies in the neighbouring countries of Somalia and Ethiopia.

While the prevailing circumstances call for emergency measures, the lesson must be that disease agents with pint-size virility like chikungunya can wreak havoc on an unprepared health system.

Health system strengthening approaches such as well-functioning surveillance and response systems will reduce the reliance on emergency measures. Dr Mailu said today, "the twin outbreak of cholera and chikungunya poses a real threat to public health not just in Mandera and the neighbouring counties but to all of Kenya. I am determined to make our health systems resilient and versatile to prevent disease outbreaks."

Building the capacity of health staff and use of community-driven prevention measures will prepare the local systems for quick response before external support is mobilised. Public-private partnerships and cross-border collaboration will neuter the viruses before they can spark multiple new chains of transmission.

Stopping outbreaks quickly at source must be the target for health systems. This means such systems must be equipped to detect early signs of unusual disease patterns, they must have quick-response teams to track and investigate cases, and there must be laboratory services to help diagnose and confirm outbreaks promptly.

A public-private initiative where the Government of Kenya, county governments, UN agencies a number of private organizations have coalesced around improving maternal and child health, is already making encouraging progress in six high-burden counties in Kenya.

This inclusiveness must be the new paradigm in health systems development. The response to this twin outbreak in Mandera should lay the foundation for building a robust health system capable of preventing future outbreaks and build back better.

Siddharth Chatterjee is the UNFPA Representative to Kenya and the United Nations Resident Coordinator ad interim.
Download
Calling all HuffPost superfans!
Sign up for membership to become a founding member and help shape HuffPost's next chapter
Join HuffPost