Microsoft dropped major news on Friday when it announced that its longtime chief executive, Steve Ballmer, is going to leave the company. While it's unclear if Ballmer left on his own or was forced out, it's apparent to everyone that Microsoft just isn't the behemoth it used to be.

Here are four charts that tell us why Ballmer is probably leaving Microsoft:

The Stock Has Tanked
First, the obvious: stock price. Microsoft isn't as valuable as it was when Ballmer took over, and keeping that share price up is a CEO's main responsibility. In 2000, Microsoft was worth nearly $400 billion. On Friday, it was trading at around $286 billion. Lose several billion dollars like that, and investors will take issue.

No One Is Buying PCs
Underlying that stock drop is the decline of Microsoft's main business: Windows. The PC operating system is the company's biggest money-maker, but customers are increasingly using cell phones and tablets to access the Internet and do everything else they do with computers. Analyst Horace Dediu of Asymco shows how that trend caught up with Microsoft by 2011, when Windows sales actually started declining year over year.

Everyone Buys Tablets
And more than any other product, it's tablets that are replacing PCs that run Windows. See how PC sales slow down as tablet sales shoot up, in this data from research firm IDC. 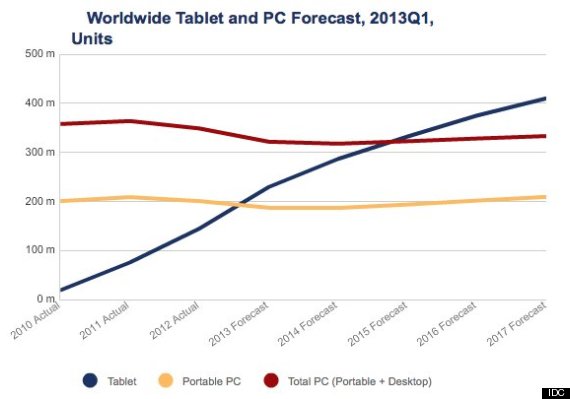 And It's Probably Not Changing
By 2012, when Microsoft got around to releasing Windows 8 RT for tablets, the market had already been eaten by Apple's iOS and Google's Android. Microsoft sold far fewer Surfaces than it expected, causing it to take a nearly $1 billion writeoff. The dominance of those two top operating systems is projected to last for some time. 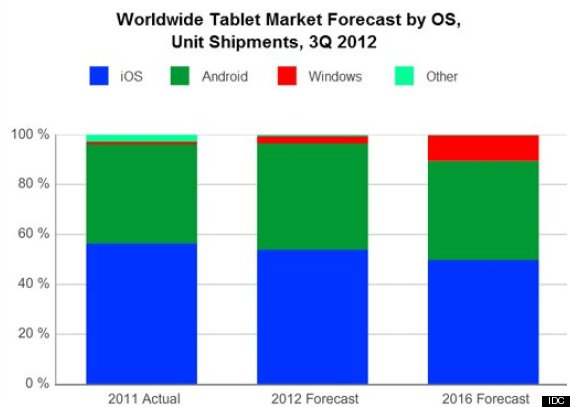