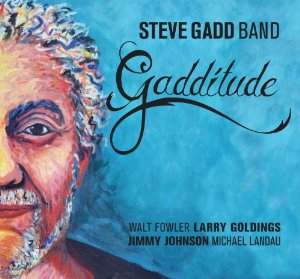 The drummer Steve Gadd has been on my radar ever since I became aware of a super group formed back in the mid-seventies called Stuff. The band was formed by bassist Gordon Edwards and was made up of some of New York City's finest session players. The band included Edwards on bass, Richard Tee on keyboards, Cornell Dupree and Eric Gale on guitars and at first Chris Parker on drums, but soon Steve Gadd became the mainstay drummer of the group. Stuff had a soulful, funky sound that was driven by Gadd's propulsive in the pocket groove.Working with a who's who in popular music and jazz, from Carly Simon and Eric Clapton to Chick Corea and Jim Hall, Steve Gadd's work was ubiquitous throughout the seventies, eighties and nineties. It was in 1975 where Steve' distinctive drum and bugle style was heard on the intro to Paul Simon's mega-hit "Fifty ways to Leave Your Lover." My personal Steve Gadd piece da resistance came in 1977, on Steely Dan's fabulous Aja. On this pop/jazz masterpiece, Gadd's inimitable syncopated drum work in concert with Wayne Shorter's soaring saxophone solo, especially in his explosive work at the coda, cemented his reputation as a drummer of extraordinary skill, inventiveness and unerring rhythmic drive.

On Gadd's latest release, unfortunately titled Gadditude ( Who thinks up these names?), the drummer is joined by his band mates Larry Goldings on keyboards, Michael Landau on guitars, Walt Fowler on trumpet and Jimmy Johnson on bass. Individually these guys are superb musicians. Together they have toured as the back up band for James Taylor for several years and on this album their empathetic and exceptional cohesiveness is joyfully on display.

On Larry Goldings tune "Ask Me" Gadd uses his signature marching snare to pilot this dreamy, slow ballad. Goldings switches from organ to the wispier sound of the Fender Rhodes for this expressive piece. Walt Fowler's uses the warm tone of his flugelhorn in this song that recalls some of Art Farmer's later work. Guitarist Landau has a penchant for interjecting beautifully lingering notes that bend and hang in the air like anguished cries.

The group takes to Keith Jarrett's "Country" like putting on a pair of old, worn familiar shoes. The 3/4 shuffle created by Gadd's brushes with Johnson's slender bass lines, and Golding's gospel-like Wurlitizer work gives the well-known song a solemn and reverential sound. Walt Fowler's trumpet work is like a ray of sunshine streaming into the chapel windows on a Sunday morning, beautiful and uplifting. Landau's distinctive country treatment on guitar is full of feeling and soul.

I have always found keyboardist Larry Goldings to be a creative well-spring. On his "Cavaliero" the staccato vamp is carried by Gadd's relentlessly cadenced snare and bass drum work while Goldings plays punctuated organ lines. It is Landau's Ventures-like guitar sound that dominates the song, with its twangy West Coast reverb in clever contrast to Goldings blues dominated B3 growl and Fowler's Herb Alpert-like trumpet treatment on the chorus that makes for great fun and a stirring arrangement.

The funky "Green Foam" is a classic organ trio based blues that is reminiscent of some Booker T &The MGs or Junior Wells with a direct bow of the hat to Sonny Boy Williamson's "Good Morning Little School Girl." The tune shifts to a slow smoldering blues mid-song, with some gutsy soulful guitar work by Landau that is especially tasty.

Abdullah Ibrahim's "The Mountain" is given a sauntering groove by the understated Gadd, allowing Landau and Goldings beautiful interplay to shine through. Landau's guitar sound is so fluid and slinky, at times reminding me of Dire Straights Mark Knoffler here. Larry Goldings is a superb accompanist who knows the right sound to elicit from his myriad of keyboard options at any given time.

Landau's "Who Knows Blues" is another shuffle with a down home feel. Fowler uses the muted trumpet and Golding's pulses on the Hammond B3 with Gadd and Johnson providing the backbeat. Landau takes a slow, deliberate solo that drips with the sound of Gadd's old Stuff band mate Cornell Dupree. A funky Crescent City inspired groove.

On another Keith Jarrett tune "The Wind Up", the group lets loose and has some fun. The tune opens up full speed ahead with Fowler and Landau matching lines as Gadd, Johnson and Goldings create the groove. Johnson's bulbous bass lines are big and round as the group takes flight. Landau's guitar solo is particularly infectious as he swirls his way through the viscous groove in liquid fashion. Fowler solos over the top in a bright and punctuated style. It is Gadd and Goldings that keep this vibe going with gusto. Goldings uses the B3 to beautiful effect playing soulfully within the rhythmic lines to perfection. Steve Gadd is at his most precocious as his pointillistic playing finishes the piece. The band is heard to laugh at the end of the piece like relieved riders existing a particularly harrowing amusement park ride. These guys obviously had a lot of fun making this music and it shows.

Radiohead's spacey "Scatterbrain" finishes this rewarding album in ethereal style. The sound created by the group floats as Walt Fowler's horn soars above the atmospheric groove.

This album grows on you each time you play it. Put it on your CD player or iPod and simply sit back and enjoy. Steve Gadd's staid, subtle performance throughout is a testament to his ability to let the music speak for itself with a total lack of hubris.