The Chicago Cubs haven't won a World Series in 100 years. Perhaps that's why they celebrate every victory - you can't be sure when the next one will come along.

For the last two years, that post-game celebrating has included a song. Over 40,000 fans standing, partying, singing along to the recording of a boisterous anthem, "Go, Cubs, Go." But for most people, the story ends there. In fact, it's the beginning of a story that makes this all far more wonderful than most people swaying along imagine.

And therein lies the tale.

Singer-songwriter Steve Goodman has always been popular in his hometown of Chicago, bursting on the scene in the 1970s. However, he's always been little-known outside the city. But there's a good chance you do know Steve Goodman, because several of his songs have had great fame. In fact, he's won two Grammy Awards.

His best known is the legendary "City of New Orleans." Not only did Arlo Guthrie have a massive hit with it - but a decade later, Willie Nelson reached #1 with the song again.

With John Prine, he co-wrote the wry country hit, "You Never Even Call Me By My Name." (David Allan Coe even refers to Goodman on the recording for adding a new comic-ending that Coe insists now makes it, "The perfect country-and-western song.")

Goodman's versatility was remarkable, from folk to rock, blues and country, yet above all, riotous and sly humor throughout. And then he'd burst your heart with "Would You Like to Learn to Dance?" and "My Old Man." He was so admired that Bob Dylan sings back-up and performs on his third album. 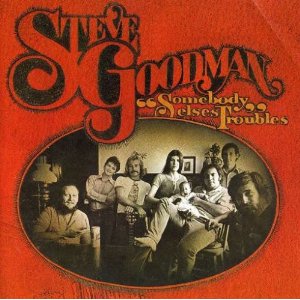 As wonderful as Steve Goodman is on record, he was better in concert, where his ingratiating personality exploded. One time, I saw him at the Universal Amphitheatre, opening for Steve Martin at the peak of the comic's stand-up career. Now, you must understand, this is when people showed up with toy arrows in their heads, reciting his album monologues by heart, shouting "Excuuuuuse me...." every other word. The last thing they wanted to see was any opening act, let alone a short, balding, cherubic folk singer they'd never heard of. Moreover, the place seated 5,200, all jammed with stomping maniacs. It was a rock concert for a stand-up comic.

And throughout all this, Steve Goodman simply kept singing, telling stories and winning over the Martin Fanatics...to their utter shock. By the end of only his fourth number, a guy sitting in front of me - who had heard my running, Steve Goodman commentary to my date - spun around, his face wide-eyed with that shocked look of heavenly discovery, and shouted, "Who IS This Guy???!!!!! He's Incredible??!!!" By the end of Steve Goodman's set, this amphitheatre of 5,200 Steve Martin cultists were stomping and screaming for the other Steve, as well.

It should come as no surprise that Steve Goodman opened for Steve Martin over 200 times.

Indeed, Steve Goodman was incredible. And he was a massive Chicago Cubs baseball fan. He wrote two songs for his favorite team. One was the hilarious "A Dying Cubs Fan Last Request," whose narrator ultimately envisions his ashes scattered around Wrigley Field. For the other, he wrote a radio jingle for them.

The song was written before the 1984 season began, when WGN radio asked Goodman to write something for them that could begin their broadcast. (If one listens closely, you can hear one of the lines, "Baseball time is here again / You can catch it all on WGN.")

You'll note that I've use paste tense a lot here. "Was" is, unfortunately, an important word in the story of Steve Goodman and the song.

Steve Goodman had leukemia, and though it went into remission, he always kept it a secret. Only a few people knew. And the knowledge of that makes his joyful personality and effervescence all the more impressive. (In pure-Goodman fashion, one of his nicknames was "Cool Hand Leuk." Another was "Chicago Shorty.") And then, after over seven years of remission, when most cases are thought to be gone - it so sadly returned. And in 1984, the same year he wrote "Go, Cubs, Go," Steve Goodman died at the ridiculously too-young age of 36.

It was then that people discovered "A Dying Cubs Fan's Last Request" was autobiographical.

He was scheduled to sing the National Anthem before the Cubs' very first post-season playoff game in 39 years. But he died 11 days earlier. His friend Jimmy Buffett performed it instead, dedicating his performance to Steve Goodman.

And then, just like in his song, the Chicago Cubs ballclub allowed his ashes to be spread at Wrigley Field. That's how beloved he was by the team, even back in 1984. Yet the best was still to come.

Because it turned out that Steve Goodman was far too good and far too full of life for the story to end there.

To be sure, Steve Goodman songs continued to be played and recorded by others, and there remained a core group of fans, most especially in Chicago. But 23 years dims that over time. Music changes, culture changes, people change. And time passes. A core group becomes a niche. And names to others become lost.

In the end, a new generation ultimately solidifies its place with its own interests.

But for whatever reason, some person in Chicago Cubs management remembered the radio song that Steve Goodman had written a quarter of a century earlier.

In 2007, the team had the idea the play it after the ballclub won, and it caught on and grew like a wildfire. It might have been nice as a radio promo, but it turned out to be infectious as a celebratory sing-along. And as the Cubs started winning and made the playoffs last year, the song took on even greater meaning to the fans. And as that winning actually grew and the Cubs suddenly now bizarrely have the best record in all of Major League Baseball, and pennant fever has ignited in Chicago - with improbable dreams of a century-delayed World Series, no matter how unlikely - the song has not only become an anthem, but a requirement as part of a Wrigley Field experience. A packed-stadium united in joyful song. And finally, a phenomenon. Whereas in most ballparks, people leave before the final out to get to their cars in time, 40,000 jubilant fans stay in Wrigley Field, refusing to leave until they've all sung their song. Along with Steve Goodman.

And it's not just a Wrigley Field experience. Two thousand miles away, a friend in Los Angeles gets the WGN television broadcast, and says that he and his 10-year-son always sing it together after each win. No doubt this occurs across the country. And with the Internet, probably around the world.

But the best part of all is an interview I heard with one of Steve Goodman's daughters, Rosanna, a musician herself, explaining how bowled over the family is by the way the song has become this massive, beloved exultation in the city and brought so much attention to her father. Once again.

His mother, Minnette, told the Chicago Tribune, "It blows my mind."

A major 800-page biography - long in the works - was released last year, written by Clay Eals. October 4, 2007, was named Steve Goodman Day in Illinois. Last year, the Chicago Cubs drew over 3 million fans, and this year they're on a pace for more. Most of whom now know Steve Goodman, when they didn't before.

And with each victory, the people blasting out, "Go, Cubs, Go," grows.

Though it won't replace seeing Steve Goodman play live, here are videos of his classic "City of New Orleans" performed in concert, and his wildly-exuberant, in-concert version of "The 20th Century is Almost Over." For a special treat, however, don't miss this video of him performing "A Dying Cubs Fan's Last Request" from a rooftop overlooking Wrigley Field.

And of course, his 20 albums still continue to sell, with newly discovered material released, along with archive concert recordings. The album, "A Tribute to Steve Goodman," won a third Grammy.

I only met Steve Goodman once. It was at Dodger Stadium, where I'd gone with my pal Patrick Goldstein who had become friends with Goodman back as a reporter covering music in Chicago. Goodman saw Patrick, came over for a brief, charming chat, and then returned to his seat to watch the game. The game, after all, that was the important thing.

The other team playing was the Chicago Cubs.

But this below - this is the experience.

Updated.
Download
Calling all HuffPost superfans!
Sign up for membership to become a founding member and help shape HuffPost's next chapter
Join HuffPost