Out singer-songwriter Steve Grand, who shot to viral fame in 2013 with the smash single "All-American Boy," will release his hotly-anticipated debut album on March 24.

In addition to the title track, "All-American Boy" features 12 all-new original songs written by Grand and producer Aaron Johnson (The Fray, Eve6). Highlights of the set include "Back to California" and "Time," clips of which Grand released on social media in advance of the album's release over the course of 2014.

Fans will recall that "All-American Boy" was funded via a Kickstarter campaign. With supporters contributing over $325,000, Grand's project became the third most-funded music project in the site's history.

Although he is an outspoken advocate for the lesbian, gay, bisexual and transgender (LGBT) community, Grand hopes listeners will see his music as universal rather than political in any respect. Although he was labeled country music's first out gay male artist, the Chicago-based star says "All-American Boy" sees him branching out into a variety of musical genres.

"I'm a songwriter, so I draw from my own personal experiences and I write about them the way any other songwriter would," Grand, who cited Billy Joel, Lady Gaga and Bruce Springsteen as influences, said in an email statement. Noting that each song "explores some kind of relationship," he added, "There's nothing different about my music just because I'm gay. I sing about things that I go through, but they are things that we all go through, regardless of our sexual orientation.”

In advance of the album's release, Grand released an intimate piano version of "All-American Boy" this week. Check it out above. For more information on "All-American Boy," head to Grand's official website.

Take a look at the album cover below: 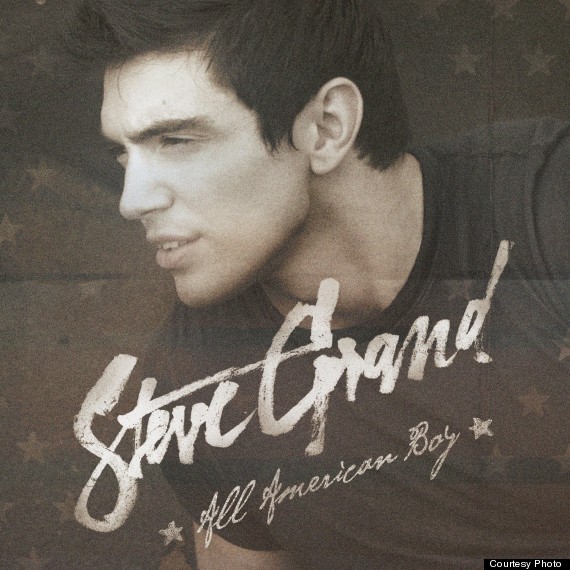 Steve Grand's Debut Album, 'All-American Boy,' Slated For March Release
Viral Videos of 2014
1 / 17
"I'm Not Gay No More"
Video footage of a young man reportedly claiming to have been "delivered" from homosexuality at the Church of God in Christ’s 107th Holy Convocation in St. Louis, Missouri made the blogosphere rounds and inspired <a href="http://www.byroncrawford.com/2014/11/andrew-caldwell-im-not-gay-no-more-remix.html" target="_blank">a number of parodies</a> in November. The man, identified in media reports as <a href="https://www.huffpost.com/entry/andrew-caldwell-homosexuality-video-_n_6159278" target="_blank">Andrew Caldwell</a> and reportedly 21 years old, tells the crowd, "I'm not gay no more. I am delivered! I don't like mens no more. I said I like women. Women women women women!" <a href="https://www.huffpost.com/entry/man-delivered-homosexuality-_n_6140690" target="_blank">Read the full story here</a>.