Orlando artist Doug Powell is keyed into the influence Steve Jobs had on technology.

That's why he's created a portrait of the Apple mogul entirely in computer keys.

Powell, who specializes in mosaics, recently immortalized Jobs in a portrait made of 5,892 computer keys that he amassed by going to garage sales, combing Craigslist and scouring a collection center filled with discarded keyboards. 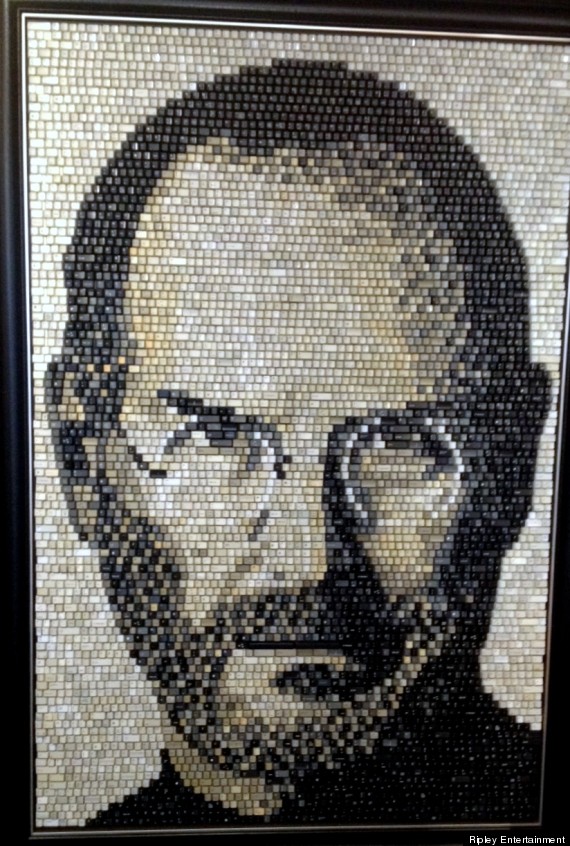 Before putting the Jobs portrait together, Powell hosed down each keyboard, pried off each key and then ground the post off the back of the keys.

After sorting the keys by color -- black, brown, gray, yellow and shades of off-white, Powell got to work, starting with the eyes and working his way up and out from there.

Powell spelled out words from Jobs' life in the mosaic: Macintosh, Apple, Pixar, iTunes. He also included a few Steve Jobs quotes in it.

"Steve Jobs said it best when he said, 'I want to put a ding in the universe,'" Powell said in a press release. "I want the
viewer to ponder the infinite, profound combination of thoughts, ideas and inspirations that have surely passed through this 'intellectual porthole,' and all made possible with just the common computer key."

The Steve Jobs computer key portrait has found a home with Ripley Entertainment, which purchased the mosaic for future display in one of the company's many Odditoriums around the world.

Edward Meyer, Ripley's VP of Exhibits and Archives, is very familiar with Powell's work, but is especially fond of this one.

"Ripley's has several of Doug's mosaics in our museums, some made from jigsaw puzzle pieces and some from computer keys," Meyer said in a press release. "I think this is his best work yet, as it's such a large portrait and it captures Steve Jobs perfectly. He really looks like he is staring right at you."

PHOTO GALLERY
Unbelieveable But True Images From Ripley&#039;s
Voting Made Easy
Register to vote and apply for an absentee ballot today
Register now

Steve Jobs Computer Keys Portrait Acquired By Ripley's Believe It Or Not! (PHOTO)
Unbelieveable But True Images From Ripley&#039;s