Apple founder, former Pixar chief and Disney Board of Directors member Steve Jobs passed away on Wednesday, with Disney CEO Bob Iger releasing a statement soon after his passing:

Steve Jobs was a great friend as well as a trusted advisor. His legacy will extend far beyond the products he created or the businesses he built. It will be the millions of people he inspired, the lives he changed, and the culture he defined. Steve was such an “original,” with a thoroughly creative, imaginative mind that defined an era. Despite all he accomplished, it feels like he was just getting started. With his passing the world has lost a rare original, Disney has lost a member of our family, and I have lost a great friend. Our thoughts and prayers are with his wife Laurene and his children during this difficult time.

Jobs' affiliation with Disney comes from his remarkable stewardship of Pixar. In 1986, Jobs bought The Graphics Group, the computer graphics division of Lucasfilm that was spun off on its own. He soon changed the company's course from hardware producer to animation studio, setting the newly renamed Pixar on course to remake animation history. He was the CEO from the beginning of his run there, and the Chairman of the Board starting in 1991, as well.

After running through a number of short films throughout the 80s and early 90s, the studio released its first game changing animated feature, "Toy Story." Gorgeously computer animated, it was a runaway hit, spawning not only a franchise -- it's up to three features and multiple short spinoffs -- but an animation empire that has won Oscar after Oscar. Now, nearly every successful animated film utilizes computer graphics, with blockbusters such as the "Shrek" series following in Pixar's foot steps.

In fact, 14 out of the top 15 animated films, in terms of domestic box office earnings, are CGI-based.

Disney bought Pixar outright in 2006, making Jobs a member of the Board of Directors and the company's largest single shareholder.

"As we approached the end of our relationship with Disney and we looked at our future, we were at a fork in the road," he said when Disney bought the innovative studio. "Disney is the only company with animation in their DNA."

Director Steven Spielberg added a statement about the passing, saying, "Steve Jobs was the greatest inventor since Thomas Edison. He put the world at our fingertips."

His contributions, of course, are even more impressive in the field of how we consume media. The news of Jobs' passing spread instantly thanks in large part to smart phones, the most popular of which being the iPhone. A sweet irony for the innovative legend, whose vision pushed technology and communications forward in leaps and bounds over the past thirty years.

When those phones finish texting, tweeting and calling with the news, they'll go back to their other, groundbreaking uses: playing music, streaming podcasts and watching TV shows and movies. In short, Jobs helped reshape the way we take in entertainment, creating a mobile audience that forced entertainment executives to entirely rethink their production and distribution strategies.

Steve Jobs' innovation transcended into many aspects of the entertainment industry. Here are a few of Apple's most memorable supporting roles in cinema. 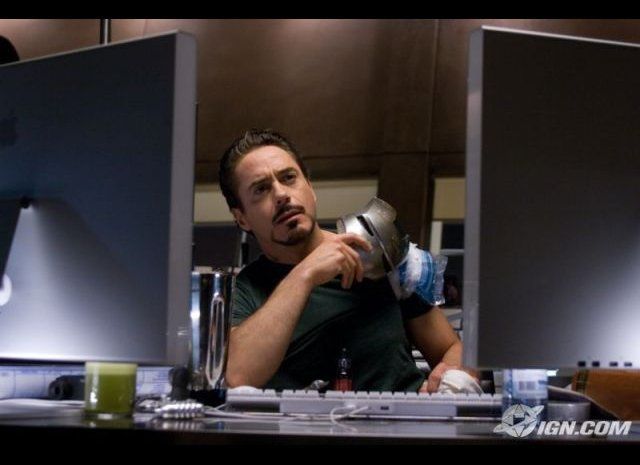