"I am a modern Mary Magdalene, the truth of who I am was blacked out. Steve fancied himself a Christ figure, but hated women, was a delusional contemporary business, religious fundamentalist who spread a culture of reality distortion." - Chrisann Brennan

Steve Jobs is a hero, even a saint, to millions of Apple fans. But to others, he's clearly a villain for his mistreatment of colleagues and friends. I asked his first love, Chrisann Brennan, who suffered greatly from his callousness, what she'd say to Jobs today. Her answer may surprise you.

This autumn, two movies explore the stunning contradictions in Jobs' life: Alex Gibney's, The Man in the Machine and Aaron Sorkin's Steve Jobs.

Chrisann Brennan, the mother of Jobs' first child, has been described as the "emotional heart" of Steve Jobs: The Man in the Machine. She recently came to the Fresh Dialogues studio for an intimate conversation about her relationship with Steve Jobs and their child, Lisa Brennan-Jobs. In this video clip, we discuss why, despite being burned by other journalists, she chose to take part in Gibney's documentary. She also shares her unique perspective on why the whole truth matters. As Andrew Ross Sorkin explores, Steve Jobs can be both hero and villain.

Here's the transcript of our conversation (edited for length and clarity):

Alison van Diggelen: What are you hoping to achieve by contributing so fully in the documentary (Steve Jobs: The Man in the Machine)?

Chrisann Brennan: When they first approached me, they said Alex Gibney did not manipulate content and in the spirit of what I intended, he would uphold that. I've had a lot of experience, because of Steve, where people...run on their own agenda...but I found that Alex Gibney did uphold what I said.

Alison van Diggelen: What message are you hoping to get over?

Chrisann Brennan: I don't want to judge Steve because he did what he did, it was fabulous...but I like the fact that the (movie) spectrum shows we are different people now. We value different things. We will expose these things because we want to have a dialogue in the world about the whole picture... not just the 'Mount Rushmore picture' of people who do well.

Alison van Diggelen: So you can contribute that fully faceted perspective?

Chrisann Brennan: Yes, I do feel that. 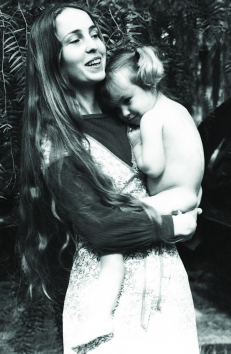 Alison van Diggelen: You said "I don't want to paint me as the victim, and Steve as the villain." Is there an alternate way you'd like to frame it?

Alison van Diggelen: And do you feel that is a victory right there?

Chrisann Brennan: I feel it says if you hold onto the truth, it actually starts to amount to something. This was twisted love...we would have done better if we could have.

Alison van Diggelen: Is there anything you wish you'd done differently?

Chrisann Brennan: Oh, yeah...but I couldn't have. When I was living with Steve and he was showing me his poetry, I really wish I'd taken it to heart more deeply.

Alison van Diggelen: Was this his Bob Dylan poetry?

Chrisann Brennan: Mm hmm. When I grew up enough to be an adult and understand that 17-year-old, I felt ohhhh. There's just so much. If we had a chance to talk now, it'd be great...

Alison van Diggelen: What would you ask him?

Chrisann Brennan: I think I would just express some kind of love...

Alison van Diggelen: You would tell him you loved him?

Chrisann Brennan: In some form...

Alison van Diggelen: That's beautiful...Now I want to find that passage...(that shows) the side of Steve that is not well known: this goofiness.

Chrisann Brennan: (Reading from her memoir, The Bite in the Apple) Running into the kitchen one day, he took the phone off the hook, pressed the # key and told me he'd just blown up the world!

One last question: what do you feel was Steve's greatest legacy?

Chrisann Brennan: He showed people how to free themselves up...how to be who they were. Yes, he made a technological device...but mainly the message is to be who you are. Now a lot of people are running around trying to be like Steve Jobs. They miss the point...it is to individuate, to understand what you need to go out and do. He was such a fabulous example of it in so many ways.

Alison van Diggelen: Chrisann Brennan, thank you so much.

Read more at Fresh Dialogues about Brennan's perspective: "I am a modern Mary Magdalene, the truth of who I am was blacked out. Steve fancied himself a Christ figure..."

Check back soon for more video highlights from Chrisann Brennan at Fresh Dialogues:

On their experiments with LSD; and what made him wildly fearful

Oh how he changed from the deeply in love teenager to the ruthless businessman who "lost his humanity."

On their daughter Lisa Brennan-Jobs and how Jobs was "wowed" by her, yet denied paternity for many years