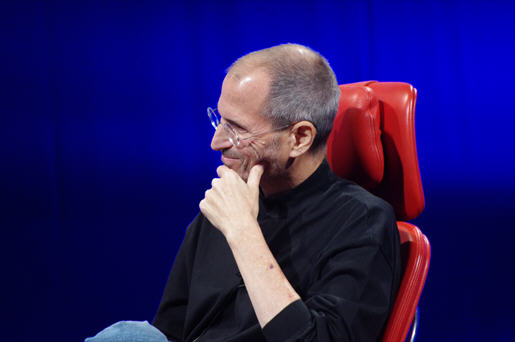 Steve Jobs at All Things Digital (photo by Larry Magid)

Jobs, for the first time, said that he started working on the iPad "in the early 2000s" before the company developed the iPhone. When his engineers showed him the multi-touch interface, he realized it would be a good design for a phone. The tablet project was "put on a shelf" but the rest is history. Jobs said that Apple has sold 2 million iPads since it went on sale on April 3rd . Jobs said that an iPad is sold every three seconds.

Death of the PC?

Although he didn't quite predict the death of the personal computer, Jobs said that tablet devices like the iPad are likely to take over as consumer devices. "When we were an agrarian nation, all cars were trucks because that's what you needed on the farm ... As people started moving away from the farm, the car started taking over."

PCs are still going to be around." However, Jobs said, only "one out of x people will need them." He said "the transformation will make us uneasy because the PC has taken us a long way ... We like to talk about post-PC era but when it really starts to happen it's uncomfortable for a lot of people."

But even if you agree with his analogy, the truck is still a viable vehicle. Even in Silicon Valley, where Jobs and I live, you see quite a few trucks but when you go to the South, Texas, the Midwest or any rural area of America, you see plenty of trucks.

So even if tablet devices do become the "car" for consumption of digital data, there will be plenty of people who need digital equivalent of trucks to produce media. Whether its blog posts, reports or creating and editing video, there will still be a need for laptops, desktop PCs and powerful workstations.