I've never understood this blind, ignorant and glazed-eye adoration of Steve Jobs. People who don't know him, have never met him and have little understanding of what havoc he's wreaked on ordinary people, then endlessly compare him to Thomas Edison, Nikola Tesla and the other seminal inventors in human history.

Not the MP3 player.

And the news media has followed him around like the guy with the shovel follows elephants around at the circus. Doing his bidding. Helping him rampantly promote his products and make money. Here's a news alert for the Media: That's what advertising is for. You don't give it away for free to Steve Jobs.

In looking for an unflattering picture of Jobs, I had an interesting experience. I couldn't find one that was the slightest bit unbecoming. Look, we all have photos of ourselves that don't look good. But I wouldn't put it past Jobs and the Apple PR meat-grinder to have scoured the Net looking for un-airbrushed photos of their fearful leader and threatening legal action. Here's one I found after searching endlessly; it's of an infinitely arrogant person who thought he was powerful and rich enough to beat cancer. 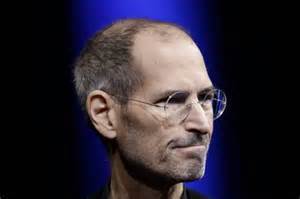 Portrait of an egotistical, hypocritical and all-consuming ogre

Even in writing his book, "Steve Jobs," Walter Isaacson gave Jobs a pass. Fluffy, shallow and avoiding any serious references to the people Jobs hurt, stole from and generally tried to destroy with impunity, this wildly popular and best-selling book revealed very little, if anything real about Steve Jobs. Yet, it was hailed along in the wake of Isaacson's previous bios of Benjamin Franklin and Albert Einstein.

In speaking with Isaacson shortly after the book was released in late 2011, I asked him if he was serious. He was taken aback for a moment and then stuttered out that he thought it was an unvarnished book about the very human Jobs. I immediately countered with, "Oh really, Jobs was very human, was he? Why have I had conversations with many women who've worked for him who were used and abused by him for a few months and then ordered into an Apple board meeting, fired, cursed at and told 'You'll never work in Silicon Valley again' by Jobs?" Isaacson was silent.

Similarly, I could never understand why Job's longtime friend and partner in building Apple, Steve "Woz" Wozniak, always toed the line about Jobs. Surely he, if anybody, would've seen what a monster this man was, how he treated others and Wozniak himself.

But no, Woz had to live a lie, sucking up to Jobs out of a mixture of fear and loathing of being yelled at by this megalomanic bully. Woz should've woken up the instant Jobs reportedly brought him the first Apple invoice for computers, but had surreptitiously changed the amounts to benefit Steve Jobs and cheat Woz. 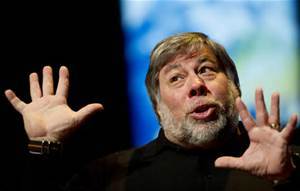 It appears Woz might've finally disposed of his fantasy-land view of Jobs.

In a recent Business Insider column entitled, "Steve Jobs 'played no role at all' in designing the Apple I or Apple II computers," Wozniak shirks off his tech-geek cluelessness and shows some signs of a pulse, saying, "Steve Jobs played no role at all in any of my designs of the Apple I and Apple II computer and printer interfaces and serial interfaces and floppy disks and stuff that I made to enhance the computers. He did not know technology. He'd never designed anything as a hardware engineer and he didn't know software.He wanted to be important and the important people are always the business people. So that's what he wanted to do."

Well, that pretty much deflates the utterly specious mythology that Jobs was a "great inventor." We're making progress now. And it comes right from the man who should know.

Woz added to what he should've stated 30 years ago, but couldn't: "The Apple II computer, by the way, was the only successful product Apple had for its first 10 years and it was all done, for my own reasons for myself, before Steve Jobs even knew it existed. So I had created it and it was just waiting for a company. And Steve Jobs was my good friend, the businessman."

Now that we all know the real story, shouldn't we immediately shift all our fawning, adulation and slobbering over to Wozniak? Seems the right thing to do.