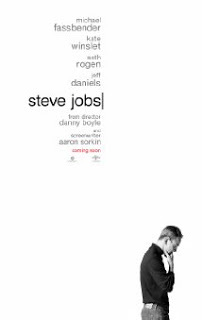 The problem with Danny Boyle's Steve Jobs, based on the Walter Isaacson bio, is that it's one long product lunch. There's a claustrophobia which derives from the setting, a kind of ur convention center in which the Apple Macintosh is presented in 1984, followed by the NeXT and then finally the iMac in l998. The latter finally lives up to its potential. Originally the bar had been set too high with Apple Macintosh failing to sell 1,000,000 computers to start and 20,000 a month thereafter, precisely the figures the iMac would ultimately achieve. The film is curiously talky by Hollywood standards, consisting of a series of conversations between Jobs (Michael Fassbender), his daughter Lisa, (played at age 9 by Ripley Sobo and l9 by Perla Haney-Jardin), his marketing guru and advisor Joanna Hoffman (Kate Winslet), tech wiz Steve Wozniak (Seth Rogen), with whom he worked on the Apple II and two other associates John Sculley (Jeff Daniels) and Andy Herzfeld (Michael Stuhlberg). The sturm and drang of Aaron Sorkin's screenplay underscores Jobs's misanthropy and bingo locates the cause. He was an adopted child who had been returned after one month. Nevertheless the portrait of Jobs terrorizing any and everyone who comes in his path gives the film the quality of one of those art house movies where tormented characters grow hoarse from their primal screaming. To say that nothing really happens in the film is unfair. After all the subject is ultimately the birth of a tech giant that may not have changed the way human beings think, but certainly modified the vessel in which they did it. However with the exception of a moment in the end where Jobs has a rapproachement with his daughter, the film is sedentary. At the end Wozniak tells Jobs that it's not binary. You don't have to choose between being a good or successful person. And the same might be said about this excursion into Silicon valley which ends up telling a rather old and tired story about how the very traits that make for success mitigate against the kind of humane attributes we associate with good character.