Steve Kush, the executive director of the Bernalillo County Republican Party in New Mexico, called a 19-year-old Working America volunteer a "radical bitch" on Twitter Tuesday night after she testified before the county commission in favor of raising the minimum wage.

Working America, a labor movement advocacy group, sent several members to the county meeting on Tuesday to advocate for a measure that would increase the county's minimum wage. As the organization’s state director, Chelsey Evans, stood in line to testify on the proposal, Kush disparaged her on his Facebook page.

"Uh oh," he wrote, "another Working America chick...nice boots...I know she makes more than min wage." He later added in the comments, "she was hot enough to almost make me register democrat." 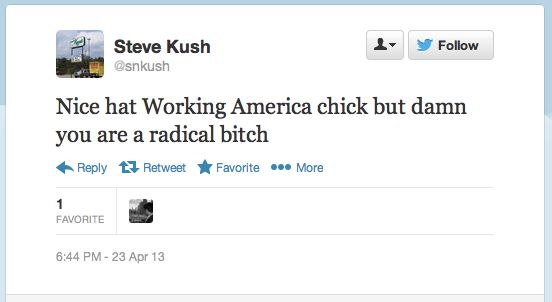 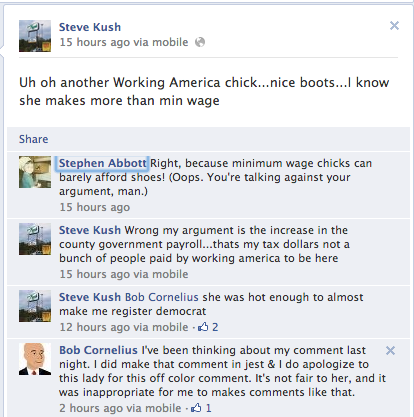 ProgressNow New Mexico, a progressive advocacy organization, said on Wednesday that Kush should resign. “In a state run by one of the country’s most high-profile Republican women, the party’s leaders appear to see nothing wrong with misogynistic statements towards working women time and time again," said spokeswoman Marsha Garcia. "Mr. Kush should resign."

“If the Republican Party wants to know why they have such a hard time connecting with young women, they should start by examining the very public way their leaders feel about young working women,” said executive director Pat Davis.

ProgressNow New Mexico confirmed that the woman who was the target of Kush's first remark is 19 years old, but Working America said that she wished to remain anonymous.

Kush did not respond to The Huffington Post's request for comment.

Bob Cornelius, the county Republican party’s former executive director, replied to Kush's "nice boots" remark Tuesday by insinuating that Evans is a prostitute. "Maybe she uses those shoes to walk Central," he wrote under Kush's post, referring to a street that is notorious for prostitution. "Even in this economy she can exchange bumper cables for boots."

Cornelius later deleted his post and apologized. "I've been thinking about my comment last night," he wrote. "I did make that comment in jest & I do apologize to this lady for this off color comment. It's not fair to her, and it was inappropriate for me to makes comments like that."

Evans told HuffPost that she has accepted Cornelius' apology but has not heard from Kush.

"We are disappointed by the attacks made through social media at yesterday’s county commission hearing," she said. "Comments like those have no place in public discourse. We have received an apology from one offending party and have accepted it."

The proposal being debated at the meeting Tuesday night passed by a vote of 3-2. The Bernalillo County minimum wage will increase from $7.50 to $8.50 per hour.

UPDATE: The Albuquerque Journal's Dan McKay is reporting that Kush has been "suspended indefinitely without pay" for his social media posts.

Kush also apologized, telling McKay, "It was in ill-fated attempt at humor, on my personal page, not the county party’s page."

CORRECTION: This article previously identified Steve Kush as the chairman of the Bernalillo County GOP. He is the executive director.