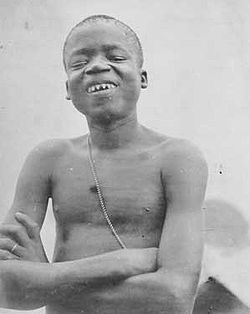 Steve Romagnoli's Skip to My Lou currently playing at Theater For the New City, is a drama of ideas, but it's also a drama. In this regard it bears the strong imprint of Harold Pinter whose threat filled story lines were also disquisitions on being. The air of constant and literal physical menace is something that the director S.C. Lucier artfully underscores throughout the production. Skip to My Lou is predicated on two experiments one occurs early in the play when Chavonne (Marguerite Genard), a Phd candidate in psychology uses her future boyfriend Thomas (Frank J. Monteleone) as the subject of a study on altruism. In one part of the experiment an old lady, who's playing the part of a landlord, is sitting in a McDonald's, screaming into a cellphone at a tenant she is about to evict. When she gets up, she leaves her purse. Thomas not only returns the purse, but offers to take care of the back rent. This first experiment is only a prelude to the second one which deals with the nature of love. Thomas's old school buddy Simon (Nicholas Tucci) is what we might call a free lance anthropologist. Simon's hell bent on proving his cynical view of human nature. He's white and married to a retarded black African, Yo-Yo (Isi Laborde), who he actually purchased. The fact that he's married to a yo-yo is a bit of dark comedy that won't be lost on playgoers. Through a vertiginous set of twists and turns, we find out that Simon has had sex with Chavonne in an earlier period of her life when she'd called herself Chamika and had slept with hundreds of men in the wake of a traumatic incident (her father had murdered her mother on her twelfth birthday). Soon nothing is what it seems to be and the relationship between Chavonne and Thomas, who had pledged unconditional love to each other, is put to the test. Role playing is another of the play's themes and it's developed around both Simon's theory that Chavonne is a psychopath but also in relation to racial stereotypes (and also in the play's altruism experiment which employs role playing like Stanley Milgram did in his famous exploration of obedience). When we meet Chavonne in the first scene of Skip to My Lou, she's playing a black hooker who offers to give Thomas, who is white, a blow job on a park bench. Our introduction to the two lovers turns out to be a charade, albeit a rather cynical one. Ultimately, however, it's Chavonne and Simon who drive the action of the play. They're the two researchers. Larissa MacFarquhar's much talked about book about people who go to extremes to perform altruistic acts, Strangers Drowning, is totally germane to the discussion, as are a number of other texts, social issues (affirmative action) and historical incidents (the case of Ota Benga, the Congolese pygmy who was an attraction at the Bronx Zoo in l906). It's one thing to be politically incorrect for the sake of it, but the provocation of Romagnoli's script transcends any kind of intellectual shock jockery. Skip to My Lou inhabits the territory of Rousseau's Emile, or On Education, Hobbes Leviathan and Samuel Butler's Erewhon. Skip to My Lou is only running through February 28th. As a playwright of ideas, Romagnoli is right up there with Stoppard. Don't miss it.

{This was originally posted to The Screaming Pope, Francis Levy's blog of rants and reactions to contemporary politics, arts and culture}