WASHINGTON -- One of the central arguments of Rep. Steve Stockman's (R-Texas) Senate bid is that he's the "proven conservative" in his primary against Sen. John Cornyn (R-Texas). Stockman boasts on his campaign website of his record on issues like securing the border and gun rights. He even mentions that he's been endorsed by three gun groups. The problem, however, is that two of them aren't actually backing him.

As recently as this past week, Stockman's campaign site included a section of "past and present endorsements," an unusual method of lumping together groups that are currently endorsing him and those that endorsed his past campaigns for the House of Representatives. After The Washington Post pointed out that at least seven of the 12 groups listed haven't come out in support of his Senate bid, the Stockman campaign took down the page.

But as the Dallas Morning News notes, Stockman is promoting the endorsements of three gun groups on a separate page of his website, even though two of them haven't actually endorsed him. From his site:

The Texas State Rifle Association Legislative Director Alice Tripp told The Huffington Post that her group has not endorsed Stockman because they "don't make federal endorsements."

The National Rifle Association, meanwhile, has endorsed Cornyn instead. When reached for comment, an NRA spokesman reiterated the organization's exclusive support for Cornyn in the Senate race.

Stockman spokesman Donny Ferguson said the "proven conservative record" section of the campaign site, which features the gun groups' endorsements, came from Stockman's most recent run for the House of Representatives.

"That's part of the old House site from 2012 that's still being updated," he said.

Stockman served one term in the House in the 1990s and was reelected in 2012. He has become known for pulling publicity stunts during his time in Congress. Last year, Stockman brought conservative rocker Ted Nugent as his guest to the State of the Union address. He is also active on Twitter, recently joking about using "liberal tears" as "gun lubricant."

A December poll showed Cornyn with the support of 50 percent of likely Republican voters, while only 6 percent supported Stockman. 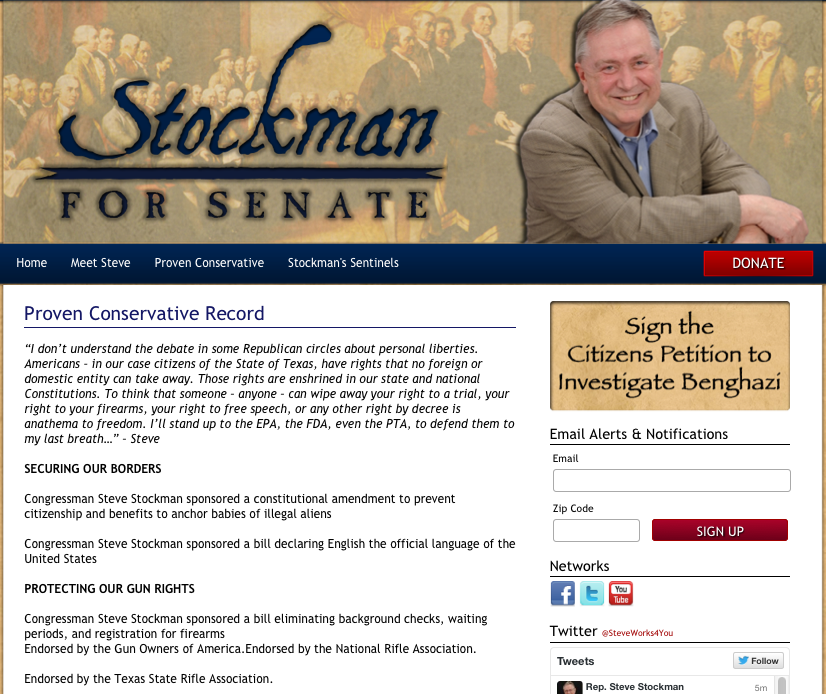