"My life was saved between sixteen and eighteen," freshly retired Seattle Sounders player, Steve Zakuani recently told me at a park bench during an interview at the city's South Lake Union area. "Without the support of mentors during those two years, I wouldn't be here today."

The mentors Steve refers to are Mr. Goodison -- a former teacher at his school in Tottenham, London, who hand selected him to participate in an after school program for kids who were "in danger of not making it" and Myles Munroe -- a motivational speaker who Steve was coerced into seeing in 2005; their encounter would soon flourish into a father-son-like bond until Myles tragically passed away recently in a plane crash, just prior to the release of 500 Days, Steve's first book.

"Myles helped me to realize early on that what I do, whether I became an athlete, doctor, or whatever, can be separate from who I am because what you do isn't forever" -- a perspective that was invaluable in April, 2011 (the peak of Steve's career) when, during an unusually aggressive tackle by a Colorado Rapids midfielder, his leg was shattered in two places.

He went on to say, "Had I not known these things about life at such a young age, retiring would have crushed me. Some guys I've talked to recently who are high-profile and retired this year are struggling and don't know what to do but that's who they've been their whole life -- a footballer. I have learned to wear many hats. I have my own DNA, fingerprints and all of that and that makes me feel valuable. I live from that space. It took me a while to get there."

"Zak" (as he's often referred), originally from the Congo -- who still retains a sharp memory of men standing outside his front door with guns as a young child -- has come a long way since his self-proclaimed "black sheep of the family" days as a youngster when he was a lost soul, running with a precarious crowd in the low-income and gang-infested neighborhood of Tottenham.

"My mom was always in my corner. She was sympathetic. She was the key back then when I was getting into all of that trouble and I doubt I would have a relationship with my parents now if it weren't for her," he said with gratitude pouring from his words. 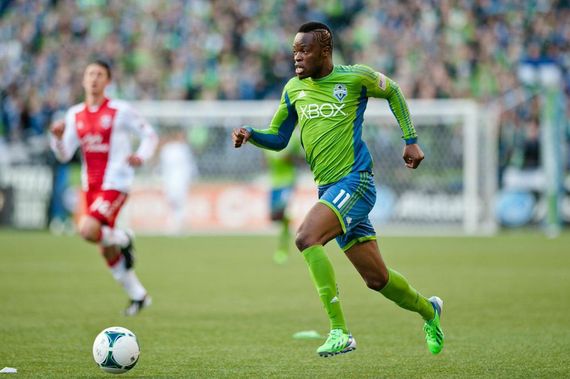 Millions of people viewed the footage of the moment when Steve's leg was flying in the air like a rag doll's, listless and unrecognizable. It was the accident that you can't bare to see but do, reluctantly, with one eye open while wincing. Despite the attack by opposition player, Brian Muller, he has come to terms with it: "It was one moment that linked us forever. It changed his life as well as mine. He and I can never escape that moment."

In 500 Days, -- the amount of time between his grueling rehabilitation and recovery of his tibia/fibula break and subsequent return to the game -- he refers to his fervent studies of prior world leaders: "It's still mind-blowing to me that leaders like Nelson Mandela never had any sort of formal leadership training and how he grew into even more of a leader during all of those years in prison. Never did he ask anyone to follow him. They just did." He went on to say, "I think kids these days are looking outside of themselves to others for answers, but it's already inside of them."

Retirement hasn't been entirely ego-free and easy for Steve. He casually explained, "It was hard adjusting at first because I thought, I'll never hear someone again, say, 'Great game, Zakuani! Or cheering me on or asking for an autograph. But I did have that moment; that memory is for life."

A characteristic of Steve's that was a constant thread during our conversation was a pattern of circling back in recognition of his mentors and their crucial impact at such a pivotal period in his teenage life: "We were a group of kids headed in the wrong direction but Mr. Goodison made the time to meet with us every week after school and that's where we learned life's lessons that aren't taught in the classroom: how to be a man, how to set goals and achieve them, and how to be prepared and responsible. He gave us everything he knew and said, 'now go into the world and use it.'"

For now, the budding entrepreneur is focused on writing a second book, and developing his organization, Kingdom Hope. "I want Kingdom hope to help everyone to understand the power of a mentor. I wish everyone had a Mr. Goodison or Myles Monroe in their life but they don't. When someone shows you what you can do with your life if changes the course of your destiny. Life calls everyone and when you say "yes" that's when your leadership is born. You might not know how or where it's going but things start coming your way. Life rewards you for saying, 'yes,'" he told me with conviction.

As we departed, I couldn't help but notice the unique prominent tattoos that blanketed each of Steve's arms. "The one on my right is a crown over the African continent to remind me of my heritage in the Congo," he explained. He reached his right hand to the t-shirt sleeve on his left arm and proudly lifted it, explaining, "And this is an eagle's wings and a bible verse. I got it the day after the first goal I scored after my injury. The [bible] verse says something that I kept telling myself back then and say to myself now all the time: 'Walk. Run. Fly.'"