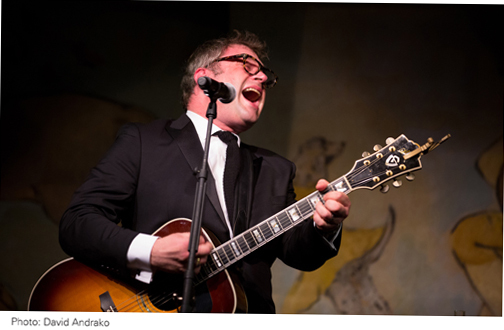 Steven Page, a guy-next-door type who co-founded a Canadian pop band called the Barenaked Ladies, and left to pursue a solo career in 2009, performs at the Café Carlyle for two weeks. You won't be singing along to his tunes of day-to-day male angst. That's because his tunes are not familiar: he has composed all of his material with several collaborators including Craig Northey who joins him on electric guitar and vocals. Page moves between piano and acoustic guitar, and Kevin Fox plays the cello. The ensemble makes for an excellent accompaniment to songs about a songwriter who may or may not have gone dry: "No Song Left to Save Me," he sings with heartfelt verve in this highly entertaining show.

He may be singing to "Jane," who, according to song, "doesn't think a man could be faithful." "Speak slowly," he sings in another song, "You're talking to a Manchild." "Give it some time/ Just let it go/ And soon you will know."

Steven Page's neurotic concerns may just hit a universal nerve: "You don't love me anymore," he waxes nostalgic in "Linda Ronstadt in the '70's." He's "lyin' in bed" just like "Brian Wilson" in that Beachboy titled tune, and throughout he channels the iconic licks: "Can't help but love you so," "Sugar pie/ Honey bun," "Sail on silver girl/ Sail on by," and especially "My Sweet Lord." In one funny bit, he claims to have had a conversation with Jesus, with whom, it turns out, the singer songwriter has a lot in common, especially his love of The Beatles. "Well, who doesn't?" he asks, and says today's woes may be the result of some pastrami. Playful, witty and engaging, he's singing through the pain.