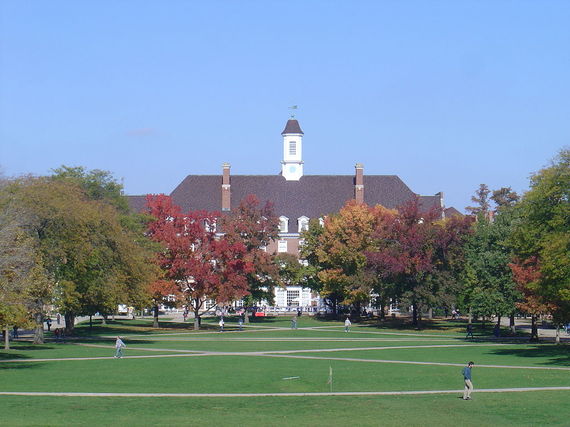 Yet another scandal is brewing among the anti-Israel wing of the academy. The University of Illinois recently rescinded a job offer from Steven Salaita, a scholar of American-Indian studies, after administrators at the school read the vicious anti-Semitic commentary Salaita has been posting on Twitter. The Israel-hating lobby is now crying "foul," saying that not hiring Salaita violated his academic freedom.

Let's relish in the irony for a moment: the same folks who advocate for the boycott, divestment and sanction (BDS) of Israeli academics now claim that anyone should be able to express academic viewpoints without repercussions. Try telling that to Hebrew University professors in Jerusalem that the BDS-crowd wants to ban from American schools.

Salaita's tweets are appalling -- and he recently broomed his account of the worst ones, so these are the tamer comments. My personal favorite is this:

"Rednecks need a new slogan. Instead of 'kick their ass and take their gas,' how about '#Gaza is a disaster, but Netanyahu is my master'?"

If that didn't make you cringe, he also accused Israeli soldiers in Gaza of "rounding up" Palestinians "and murdering them at point-blank range." You can't even give Salaita points for originality. He mostly repeats the anti-Semitic libel that a small group of Jews controls American foreign policy. It's so predictable, it's practically plagiarism.

But it wasn't plagiarism that got Steven Salaita into hot water; it was his rank intolerance. Still, the hordes rush to his defense. Over at the Jacobin, Brooklyn College Professor Corey Robin thunders that this is yet another case of how "pro-Israel forces have consistently attempted to shut down debate" inside academe. The right of academic freedom, he argues, means that the University of Illinois shouldn't have rescinded Salaita's job offer. The American Association of University Professors recently came out with a statement saying there was "good reason to fear that Professor Salaita's academic freedom and possibly that of the Illinois faculty members who recommended hiring him have been violated." On the merits, they are just plain wrong.

The Salaita case boils down to a simple question: did the University of Illinois have a right to not hire someone as a researcher and teacher because of his abhorrent political views?

The obvious answer is yes. Academic freedom, the right to research and teach one's subject without repercussions, applies to professors employed by a university. While Salaita had almost been hired at the University of Illinois, he failed to get the support of the school's Chancellor and its board of trustees in the final stages of his appointment. Without their approval, the school withdrew its offer. In academia, as in baseball, inches matter. You don't get the full privileges as an academic unless you are actually an academic at an institution. Being "almost" a professor does not count.

The academic hiring process is notoriously subjective and takes into account a number of factors besides an academic's pure research credentials. Hiring committees routinely ask: Would a prospective hire get along with fellow faculty and students? No matter how good his research, would he become a squeaky cog within the machine in any way? To take an extreme example, the University of Illinois could (and should) have chosen not to hire an unrepentant KKK member, for fear that his racist views would disrupt the academic environment. Steven Salaita was just like the KKK member -- and many of his tweets support the comparison.

Salaita also chose time and again to integrate his politics with his academics. He was a loud proponent of the campaign for the American Studies Association to support the BDS movement. His views on Israel have a real bearing on his ability to be an objective teacher and researcher. In many non-science fields like "American Indian studies," politics and academics are sadly interchangeable. The buzzwords of what "theoretical framework" someone chooses to employ really means to "what ideology" does he or she subscribe. Nixing Salaita on academic grounds alone was more than appropriate, because his anti-Israel comments were his academics.

Salaita had to know his political views were fair game in the hiring process; he probably thought that, in the current anti-Israel climate, his views would help him get a professorship, not hurt his chances.

The only possible defense of hiring someone like Steven Salaita is that he would have brought intellectual diversity to the University of Illinois that would enrich the academic environment. There is a good argument that conservative schools should go out of their way to hire liberal professors and vice versa, because having a vocal minority opinion prevents a school from becoming an ideological echo chamber. However, no one seriously believes that Salaita's anti-Israel tirades were not already the norm within the academy generally and the University of Illinois specifically. He would have brought nothing new to the table that was not already there.

The really sad part of this story is that Salaita was almost hired. It should never have come to the point where the Chancellor and the University of Illinois board of trustees, normally a rubber-stamping body, had to intervene. Instead, Salaita's rank intolerance should have been weeded out, like any bigotry, at the initial stages. That he was selected by a faculty committee at all reflects the anti-Israel movement's stranglehold on the academy.