Steven Sanchez made history last Friday when fellow students at the University of Northern Iowa voted to crown him Homecoming Queen, making Sanchez the first transgender person to win such a title at her university.

Sanchez, 21, lip-synched to Selena Gomez’s “Like a Champion” and “Come and Get It” in order to win the crown. A standing-room only crowd erupted into thunderous applause at the announcement that she had won the title.

"One of the main reasons I did this was to raise awareness of LGBT issues and trans students on campus and I feel like just by running I did that," Sanchez, who identifies as "gender queer," stated in the above video.

Sanchez discovered that he had won the title at a Friday night pep rally in preparation for the school's homecoming football game the following night. Check out the above video to see her reaction following the win, as well as a heartwarming exchange between Sanchez and David Pope, president of LGBT organization UNI Proud.

"Steven is just trying to be himself — and be herself," UNI Proud adviser Ruth Chananie told reporters. "It is a statement to say that every person should be accepted for who they are, and be included regardless of their gender expression, sexual orientation or any other thing." 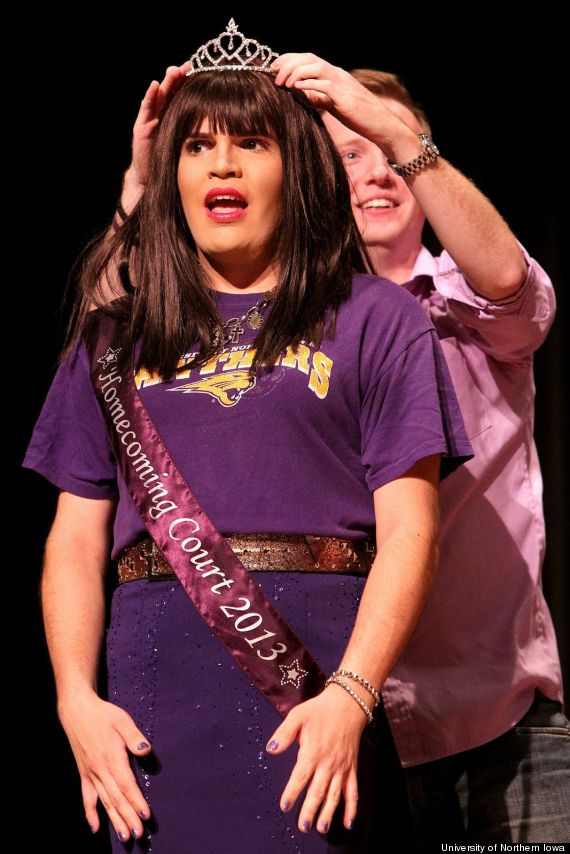 Sanchez isn't the first transgender individual this year to have the title of homecoming royalty bestowed upon them. Earlier this month, students at Concord High School in New Hampshire voted Ray Ramsey the king of their homecoming court in a reported "landslide" victory. Shortly prior to this win, Cassidy Lynn Campbell became the recipient of the Homecoming Queen title at her respective high school. However, the 16-year-old found herself the target of extreme online bullying and harassment, prompting her to take a stand on anti-LGBT bullying by posing for the "NOH8 Campaign."

Sanchez told reporters that he was shocked his routine had won the title of Homecoming Queen at the University of Northern Iowa. "When they called my name so many memories came rushing back about how I never thought I would find a community anywhere. I never thought I would be accepted within the larger community," she said. "And when I was standing on that stage being crowned and people were cheering and, this is going to sound completely cheesy, but it honestly felt like all my dreams were coming true."