When amateur filmmaker Krishna Bala Shenoi created an animated tribute to Steven Spielberg, he may have imagined that his idol would see the short clip, but he never thought the legendary director would actually watch his video.

However, less than a week later, Shenoi's dream came true when he received an email from Spielberg's assistant on Tuesday. Shenoi's role model had seen his tribute and was so delighted by it that he praised the 19-year-old student in a handwritten note.

"Your image choices and clever transitions gave your tribute film a real narrative," Spielberg wrote. "I was impressed to say the least."

SCROLL DOWN TO SEE A PHOTO OF THE LETTER

Wow. Steven Spielberg, my favorite filmmaker of all time, wrote, *handwrote*, a note to me after seeing my animated tribute to him.

Shenoi, a second-year college student at India's Srishti School of Art, Design and Technology, uploaded his Spielberg tribute to YouTube last week. He wrote a blog post for the Chicago Sun-Times -- where he works a foreign correspondent for Roger Ebert’s Journal -- detailing his admiration for the award-winning filmmaker.

"Spielberg has a way of inspiring emotions in us in ways that not many filmmakers can. I love how he can sometimes be uncompromisingly sensitive and emotional, and others, subtle and wise," Shenoi wrote in the March 3 post. "I can't think of any other filmmaker who appeals to both to 'general audiences' and 'more serious cinema-goers.'"

In the animated tribute, which is just over 1-minute long, Shenoi nods to some of Spielberg's most famous films, including "Jurassic Park," "E.T.," and his most recent flick, "Lincoln."

According to the Deccan Chronicle, Shenoi created the animation throughout a period of four months, using a technique called rotoscoping, which involves drawing over original footage.

Watch Shenoi's animated Spielberg tribute in the video above. 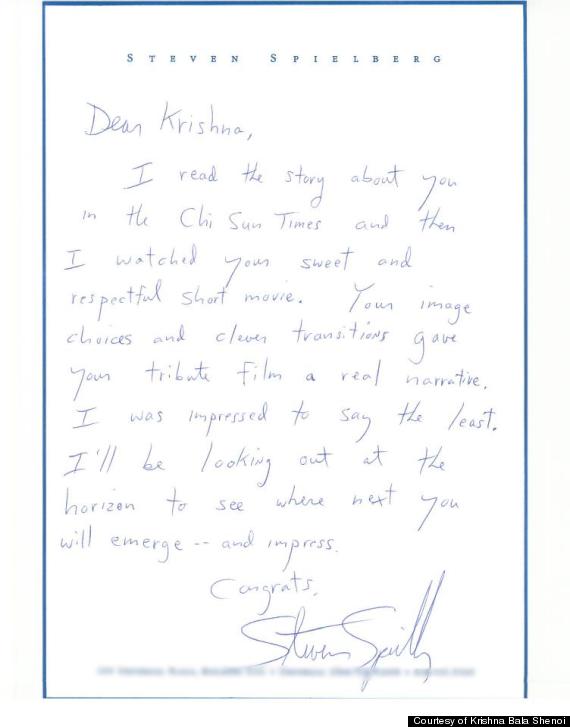 Editor's Note: The article has been updated to remove personally identifying information as part of a licensing agreement.