The release of Steven Spielberg's Lincoln may have been intentionally delayed until after the presidential election. However its debut has unintentionally arrived in time to impact an event of equal political importance. As our nation's impending fiscal cliff edges closer to reality, Spielberg's film serves as a grim reminder that gridlock is now a debilitating norm in Washington politics. 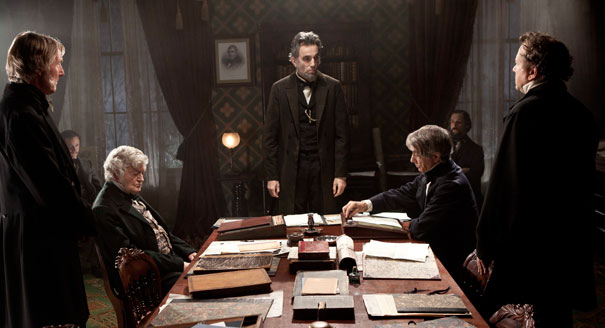 Yet, Spielberg's epic release comes at a time when our nation needs it the most. Abraham Lincoln's tenacious approach to political problem solving has now echoed in Washington, and reminds us of a period when gridlock threatened the very principles upon which our Republic was founded. Though our nation's leaders often look to history to show us the way, it is Steven Spielberg's film that amplifies Lincoln's message with a profound sense of responsibility.

The Debut of Lincoln in Washington

On November 15, Newsweek held a special screening of the film several blocks away from Capitol Hill in Washington D.C. Newsweek's Tina Brown conducted an interview with the film's Pulitzer Prize winning screenwriter, Tony Kushner, who had just arrived after an exclusive screening of the film at the White House. Following the screening, I had the chance catch up with Kushner and share a fascinating discussion on his research for the screenplay. Through his brilliant screenwriting and intense dialogue, Kushner brings Lincoln's legendary storytelling abilities to life. The movie's dialogue focused almost exclusively on Lincoln's persona as he struggled to pass the 13th Amendment in Congress. The movie offered a riveting portrait of the American President during the defining moment of his life.

Kushner offered special insight into the key messages of the film, including background on how Lincoln's politics were shaped by his desire to achieved a greater moral good. Kushner added that achieving broad support required significant compromises by Lincoln. Responding to Tina Brown, Kushner said, "Politics is not always an expression personal purity," and candidly remarked that in order to move an agenda forward, "you have to make deals."

The Art of "Political Geometry"

While the art of making deals has never been lost on Washington insiders, Kushner's screenplay unveiled a unique perspective on Lincoln's desire to fight gridlock through a strict code of moral reasoning and logic. Lincoln often read the writings of Euclid, an ancient Greek mathematician known for the development of modern Geometry. Lincoln incorporated this "Euclidian" view on logic and mathematical reasoning in order to build logical bridges between opposing factions.

During our discussion, Kushner offered insight on Lincoln's affinity for Euclidian Geometry, particularly on its usefulness in avoiding political gridlock. Kushner remarked, "Lincoln was fascinated by mathematics and geometry, and often used it to resolve political differences." In one of the most poignant moments of the film, Lincoln recites Euclid's first common notion by stating "It is self-evident that things that are equal to the same thing are equal to each other." (clip shown below)

Euclid's first common notion gave Lincoln the ability to visualize two unlike ideas and allow parties to converge on a claim that would eventually become "self-evident." Lincoln's point was that truth claims become self-evident through the dialectic, or the combined process of resolving the tension between two ideas through discussion.

Lincoln's affinity for Euclidian Geometry, when amplified by Kushner's rich dialogue, offered a profound lesson on fighting the state of gridlock facing American leadership. Lincoln believed that like a mathematician, leaders must aggressively reason toward common ground and invite an adversary into a common intellectual space. Once this occurs, positions that were once "diametrically opposed" become equivalent. Through Euclid's axiom, politically impossible tasks eventually become tenable. Most importantly, the endeavor becomes self-evident. As sure as the plight of Galileo [and the legendary dialectic between science and the Catholic Church], so came the eventual adoption of the 13th Amendment in 1865, and the abolition of slavery in America. Yet for great thinkers like Galileo and Lincoln, accelerating the convergence of opposing positions would exact a heavy toll.

In time, truth claims converge and become self-evident, but it takes human fortitude to accelerate the process when conflict is imminent. For Lincoln, his mental anguish and fatigue in many ways reflected this fortitude, but resulted in a haunting reality -- the amendment would not pass before hundreds of thousands of American lives would be lost in the Civil War. Unfortunately, arriving at a self-evident truth requires engagement and dialogue, but most importantly... it requires time.

Fighting the Forces of Political Gridlock

Today, politicians, scientists, philosophers and theologians regularly argue their truth claims in government. Yet opposing views can only converge when common ground is aggressively pursued. From abortion and civil rights to global warming and entitlement spending, it is ongoing dialogue that cultivates consensus, despite its cumbersome and time-consuming nature. Instead of inviting opposing views into the nexus between the sciences, art and religion, we too often retract into our own intellectual space. Bound by our biases and tendency towards the comfort of institutional dogma, we often sow the very same seeds of bureaucratic gridlock we are trying to avoid.

One might posit that the sequestration measure was designed to artificially accelerate the convergence of ideas, a sort of "Euclidian Stimulus" that is clearly preferable to the conflict Lincoln faced. In this, Spielberg's film has become a useful chorus, one that should resonate within our government as we approach what has now become a fiscal cliff that threatens our economic livelihood. With talks resuming between opposing parties at the White House on Nov. 16, one might conclude that the convergence of opposing ideas has resumed. Yet the movie Lincoln invokes a fundamental premise in our great republic -- the idea that gridlock can be addressed through discussion rather than bloodshed. Through dialogue, opposing views are heard and eventually converge until they become self-evident. In this respect, Kushner delivers wise counsel at time when our nation needs it the most. Through enriching dialogue, Kushner amplifies Lincoln's voracious appetite for reason -- a mathematical weapon in the fight against bureaucratic gridlock.

Ravi Chaudhary is an Air Force Officer and Doctor of Liberal Studies Candidate at Georgetown University. The author wishes to acknowledge Dreamworks, Twentieth Century Fox, Reliance Entertainment, and Movieclips.Com in the development of this article. Special thanks and acknowledgement to Tina Brown and Newsweek the Daily Beast for hosting the presentation of "Lincoln," and welcoming Veterans to attend. The views presented in this article are the author's, and do not represent an official position of the Department of Defense.