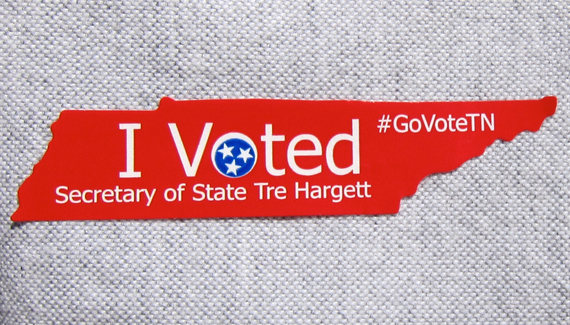 Is that an "I Voted" sticker or a "Hargett for Governor" sticker? For this first-time Tennessee voter, it's hard to tell.

Check out the included images. The American flag sticker we've proudly worn for years has been replaced by this new design from Tennessee's Secretary of State, Tre Hargett. He wants his name on our lapels, and he undoubtedly wants to run for higher office. Throw in a Republican-red map of Tennessee, and this year's voters are wearing his vision of our future. 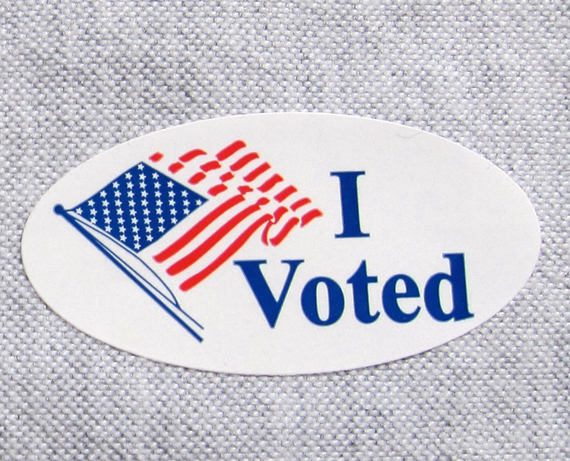 His stickers almost say, "I Voted for Tre Hargett." All that's missing is the three-letter preposition. Hargett knows that Governor Bill Haslam is term limited, so why not get a head start on the campaign trail?

Secretary Hargett's public rationale for including his name on the sticker is that he wants to be held accountable, accessible in case of election snafus. If that were true, however, a phone number or website would be more helpful. Hargett doesn't even run our elections; those are handled by his subordinate, Mark Goins, Tennessee's election coordinator. Apparently Hargett pulled rank to score some free publicity.

From Hargett's dugout, of course, this looks like a home run: a statewide, voter-targeted name recognition campaign, at no cost to himself. Thank you, taxpayers! But, if enough Tennesseans notice this abuse of power, Hargett may swing and miss.

Last week was my first time voting in a general election. Unlike so many 18-year-olds, I'd been waiting eagerly to join this great club they call democracy. I even voted early. Truth be told, it wasn't as satisfying as I had hoped. Reading the proposed constitutional amendments gave me flashbacks to the SAT exam. Poll workers seemed so suspicious of me that they asked me to confirm my signature four times. Tennessee's strict Voter ID laws didn't stop me from voting, but the process was still daunting, even for a college-bound person like me.

Maybe my hopes for the democratic process were too high. After all, Tennessee's lieutenant governor has downplayed truthful political campaigns, Davidson County voting machines defaulted to the Republican candidate in 2012, and our Democratic gubernatorial candidate suggested sending Governor Haslam to the electric chair. Our Secretary of State's self-serving "I Voted" stickers fit right in.

Thankfully, I am told that some poll locations have opted to offer both old and new sticker designs. At other locations though, your only choice is Hargett's campaign material. Under Tennessee law, his stickers shouldn't be allowed within the 100-foot campaign boundary, let alone distributed by state-employed poll workers.

Perhaps when the next election rolls around Secretary Hargett will hand out temporary tattoos, the kind little kids like. That way, even voters' children could become his own walking billboards. Given what I've seen this year, I wouldn't be surprised.

Oh, and about that "accountability" pitch: Secretary Hargett's office never got back to me when I called last week.

End Of An Era: Germany's Merkel Bows Out After 16 Years