Maybe, just maybe, a bunch of delegates to the Democratic Convention in Denver will change their minds at the last minute. Maybe there is an outside chance that between now and the last week of August a critical mass will decide that Barack Obama is not their guy -- that, to the surprise of one and all, Hillary Rodham Clinton is to be the 2008 nominee after all.

That is the thinking behind a small but determined band of Hillary backers, some of whom have formed a 527 fundraising committee that has already run one $9,700 ad in the Chicago Tribune, and plans more in the weeks to come.The Denver Group: Keeping the Democratic Party democratic, created by Georgetown Law professor Heidi Li Feldman and freelance advertising man Marc Rubin, ran an ad in Friday's Chicago Tribune declaring:

"Senator Clinton's name must be put in nomination. Her supporters must be allowed to make speeches on her behalf of her candidacy. There must be an honest roll call vote, not a symbolic one, so superdelegates can cast their votes honestly, for either candidate, as their judgment, conscience and democratic principles dictate."

Feldman told the Huffington Post that the goal of the Denver Group "is to insure substantive and legitimate selection of the nominee." DNC chairman and other party leaders "should be taking responsibility for making sure it's a legitimate procedure. They cannot demand that people simply unify around either one of them."

Feldman argued that it is entirely conceivable that an open vote could produce a Clinton victory. "Then, the decision comes down to the superdelegates. I have no Idea what they are going to do six weeks from now."

Feldman declined to say how much the group has raised, or who the donors are - "We can't disclose that information" - although he acknowledged that the 527 organization will soon have to report that data to the IRS. She said the largest donation so far is $5,000.

The Denver Group is not committed to any candidate, Feldman said, although the organization's web site, and the links provided at the site, suggest a decisive tilt toward Clinton and, in some cases, intense animosity to Obama.

Rubin, for example, writes not only on the Denver Group site, but also on Tom In Paine. There, the lead piece by Rubin is titled "The New Obama, The New Nixon and The Same Old New York Times." Rubin writes, "The analogy of Obama to Nixon is valid from many different points of view since a case can be made that Obama is the most underhanded and dishonest politician since Nixon."

Spokesfolk for the Obama campaign declined to comment on the Denver Group. It should not be confused with "Unconventional Denver," a separate anarchist organization pledged to disrupt activities at the Democratic convention. "We don't want history to remember the Democratic National Convention in Denver as something that went smoothly," Tim Simons of Unconventional Denver told the Denver Post, "We want people to know there was dissent and people spoke up."

The ad in the Chicago Tribune: 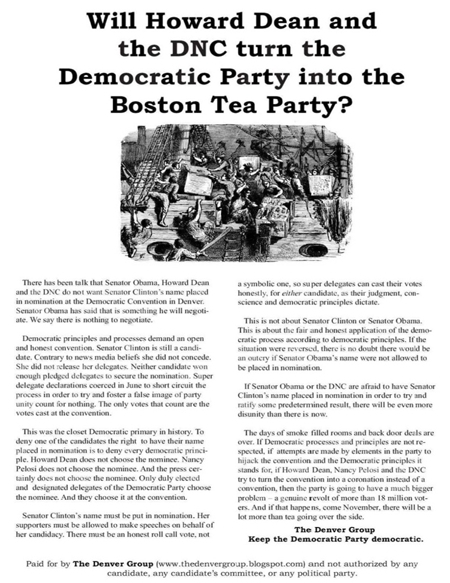