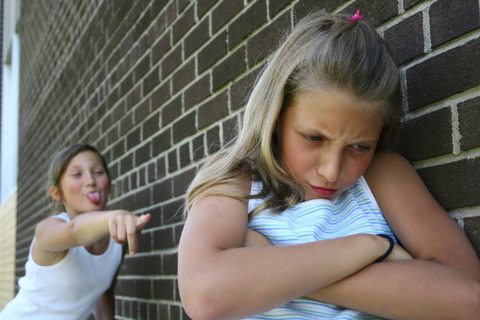 Remember when you screamed, "Sticks and stones may break my bones, but names will never hurt me?" As I recall, saying this over and over did not relieve me of my suffering from merciless teasing, bullying, and name-calling by fellow classmates. And, the statement is far from true.

According to Patricia Evans, name-calling is a kind of battering and can leave life-long scars.

Name-calling is brutal to the identity of a young child. Children do not have the experience or the sense of self that it takes to throw off the hurt. They have no emotional immune system.

And, as we get older, if the name-caller is shrewd, he or she can really find our hot spot, where the label seriously hurts -- for years.

What happens when, as adults, the name calling is more sophisticated, carries weight and can impact on our reputations, forces others to ask us about it, and demands a rational defense? What happens when verbal sticks and stones set off a chilling cascade of events that transforms the "won't hurt me" into serious damage to our person-hood?

My mother was morbidly obese all through my childhood and most of her life. And while I accepted her, I also was very sympathetic to her. I so identified with her that I became seriously overweight, dieted, became bulimic (now in recovery for over 30 years).

I loved my mother dearly, but feared becoming her.

The other side of my mother was a teacher, a Union leader, an activist in civil rights. Her work is now in the Walter Reuther Library at Wayne State University.

She was smart, and loved and admired. In the 1950-60s, prior to women gaining the ground we currently have, my mother negotiated with hard line school boards, union officials, and others. And, when she walked into a room, she had to overcome an underlying reaction to her size.

We accept obesity in opera singers, Sumo wrestlers, football players, heavyweight boxers, and other celebrities. However, for most of us, it is an embarrassment and carries with it a kind of toxic shame that originates from the belief we are at fault.

What Happens in Healthcare?

Healthcare is where the wounded show up. It is where people disrobe in front of those they do not know in order to be examined for "something wrong." It is where patients can feel embarrassment and shame for their physical frailties that may have haunted them since childhood.

Patients who are obese, those in between "overweight" and "obese," or those whose self-image is "fat," struggle to deal with disrobing in front of anyone. Few clinicians, nurses, or physicians have had to confront their own bias about fat people.

They can become detached and just not deal with it or they may avoid looking at the patient without judgment. For that matter, they may miss the clues that can actually help a patient move into a healthier life.

In a recent post, David B. Troxel, M.D., Medical Director of The Doctors Company, pointed to the suffering of obese patients due to discrimination by nurses and physicians. Clinical analyst Jacqueline Ross further points out that this discrimination has leaned into compromising patient safety.

Nonetheless, name-calling of the overweight and obese are still tolerated in our culture.

When patients are suffering, under heavy medication, confronting a life-threatening surgery, past hurts can show up in strange ways. Being aware of their own bias, their own discomfort with overweight anything, will help caregivers to not project this judgment onto others.

We now know that there is something different about those of us born into families where obesity is in our DNA, where our fat cells neither look nice nor stay away forever. Although there are many theories, no one knows yet for sure what that difference is.

However, the "why" is not the point. Rather, it is the name-calling and judgment over a lifetime that is so toxic.

Every patient wants kindness rather than pity. Respect rather than judgment. "Unconditional positive regard" rather than conditional approval. If all we are is how much we weigh, then our sense of self is fleeting at best.

To move beyond the much-too-easy habit of name-calling or labeling, judging or demeaning, caregivers have to consciously approach overweight and obese patients with unconditional positive regard. This is exactly what they would want for themselves and others.

The Obesity Society (a non-profit that is committed to research, education, and advocacy of those who suffer from obesity) provides the following questions that clinicians might ask themselves:

And, yes, everyone must try harder. Compassion and empathy carry no judgment lest they fall into the pit of verbal or nonverbal judgment and callous insensitivity.