Yesterday, the LOGO network announced that they would shelve the Drag Race episode featuring the "Female or She-male" contest. They also stated they would no longer include the "you've got she-mail" segment at the beginning. GLAAD, who had been urging LOGO to address the issue, applauded the move. "Logo has sent a powerful and affirming message to transgender women during a pivotal moment of visibility for the entire transgender community. GLAAD is committed to continuing to shape the narrative about the lives of transgender people with fair and accurate media images."

RuPaul was less than amused. He tweeted shortly after the announcement: 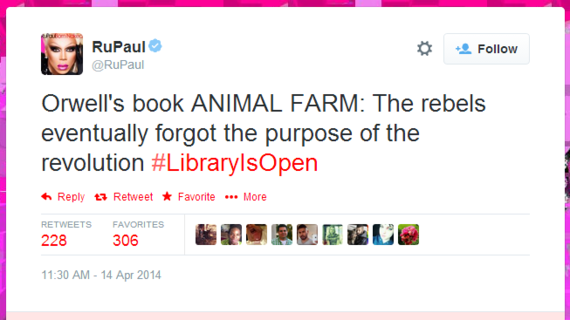 His supporters on Huffington Post responded quickly too, decrying the "over-policing of language."

Are we policing language? Of course we are, because part of that's how you win in civil rights movements. We have known this for more than 50 years. Bayard Rustin wrote in his autobiography:

"It is to recognize that the job of the gay community is not to deal with extremist who would castrate us or put us on an island and drop an H-bomb on us... Our job is not to get those people who dislike us to love us. Nor was our aim in the civil rights movement to get prejudiced white people to love us. Our aim was to try to create the kind of America, legislatively, morally, and psychologically, such that even though some whites continued to hate us, they could not openly manifest that hate. That's our job today: to control the extent to which people can publicly manifest antigay sentiment."

Republicans understand this as well: Control the language, control the debate. The coining of the word "Obamacare" is considered a masterstroke of political language engineering.

Which is why when RuPaul and his supporters defend the use of the words "tranny" and "she-male," it gives the power of those words to those who would "castrate or put us on an island and drop an H-bomb on us." Defending those words is tacit permission to others to use those words as weapons, to openly manifest their hate, against people who lack the ability to fight back. We police words, because they have the power to drive us to despair when we live under an unending torrent of hate.

There are real life consequences to that implicit permission. One of my closest friends, a transgender woman and veteran, works for the same industry I do but at a different location. She is constantly called she-male, faggot, shim, it, and tranny freak. When she reports the abuse, she is simply told, "You need to grow a thicker skin."

It's killing her slowly, but she can't quit. She needs the job, and the money. Finding work that pays well in your own field as a transgender woman is often next to impossible. So she puts up with it, day after day. I'm watching her sink slowly into a strangling morass of internalized transphobia in that soul killing hell. I hope she finds work somewhere else. Before it does finish her, spiritually or physically.

I'm not certain which would be worse some days. She suffers in ways no one should have to.

For everyone out there defending RuPaul and these words, you are partly responsible. You are giving the people using them against us permission. You're contributing to the world's attitude that we should just "toughen up" when they're used as weapons against us.

It's slowly destroying one of my closest friends. The woman my son runs, screams, and leaps at to hug, and brings stories to read every time she visits. The woman I watched teach my girls how to low crawl across the lawn "army style".

If RuPaul were doing this simply out of ignorance, I would be inclined to forgive. But he has done this over and over again, never backed down from it, never apologized. At this point, he cannot be ignorant of the harm this language causes, and I am forced to conclude he simply does not care if people different than him are hurt.

RuPaul is not transgender, and does not define himself as such. Yet, he has decided that he can unilaterally dictate what language is offensive to transgender people, a group that isn't his own. Imagine for a moment if one of the most popular and prominent members of the transgender community was encouraging straight people to use the word ****** when describing gay men. Imagine if they refused to step back from the use of this word. Would there be a similar debate?

Of course not. Yet here we are because people are still conflating drag and transgender.