Stephen Sondheim's legendary musical, Follies, went to great lengths to depict the deeply conflicted souls beneath the seemingly successful exteriors of two married couples attending a reunion for former showgirls. Follies may well have been the first musical in which a major character (Ben Stone) seemed to suffer a nervous breakdown during the musical number "Live, Laugh, Love"

Since the original Broadway production in 1971, some revivals of Follies have substituted "Ah, But Underneath" for Phyllis Rogers Stone's original Loveland fantasy, "The Story of Lucy and Jessie." In the following clip, Dee Hoty performs the number during the show's 1998 revival at the Paper Mill Playhouse.

Keeping up appearances is of paramount importance to control freaks. All too often, their calm, seemingly collected exteriors mask the emotional turmoil and, in some cases, psychotic behavior that lied just below the surface. Superficiality and bullying are their strong points; honesty their Achilles heel.

Two new productions reveal what happens when the ice starts to crack and terrible truths leak out. Each offers a form of psychodrama that is bitterly cathartic while offering the audience the chance to watch an emotional train wreck in slow motion.

One of the most compelling monologues at the recent San Francisco Fringe Festival was Bob Brader's Spitting in the Face of the Devil (which he has performed to great acclaim at fringe festivals in New York, London, and other cities). Brader's story puts a face on the theory that, for most victims of child abuse, their predator is someone they already know.

Spitting in the Face of The Devil begins with Brader receiving word that his father (a former Marine) has succumbed to an on-the-job heart attack. Unlike most people, Brader and his sister feel nothing upon hearing the news except, perhaps, a quiet sense of relief that "the devil" in their lives is now gone for good. 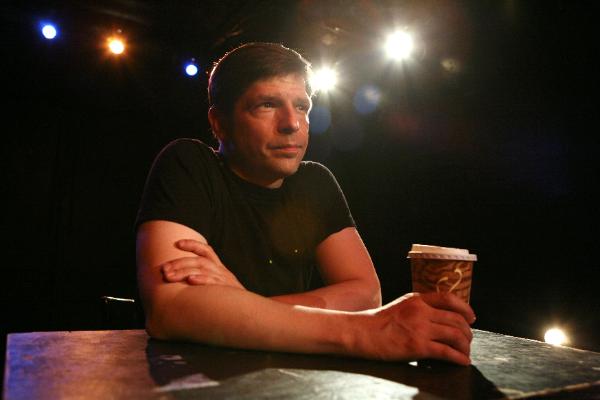 Bob Brader performs Spitting in the Face of the Devil
(Photo by: Scott Wynn)

Directed and developed by Brader's wife, Suzanne Bachner, this monologue traces a childhood history of bed wetting, beatings, blame, and belittlement. While Brader might have been confused by "Big Bob's" easy camaraderie with "Little Bob's" two closest friends, the fact that their presence kept his father distracted enough to save Bader from an occasional beating made the lack of paternal love almost acceptable.

It wasn't until one of his friends informed Brader that his father was a pedophile that things started to make sense. Bob's horror upon learning that his father had serially abused his friends and cousins (who were between the ages of 10 and 13 at the time) was only magnified by the fact that his mother had just given birth to a baby girl.

This tale of an adolescent boy not only finding the courage to confront his father, but helping his mother and sister to escape the abusive man's clutches is a profoundly disturbing 60 minutes of theatre. Beautifully performed by Brader, in far too many ways his monologue brings to mind the title chosen by George Bernard Shaw for his 1932 play: Too True To Be Good. Here's the trailer:

Over in Berkeley, the Aurora Theatre Company opened its 20th season with a rock-solid production of Edward Albee's drama, A Delicate Balance. This is the play for which Albee received the first of his three Pulitzer Prizes for Drama. While composer Alexander Zemlinsky may have titled his 1917 opera, Eine Florentinische Tragodie, I have always thought of A Delicate Balance as an "American Goyische Tragedy. " 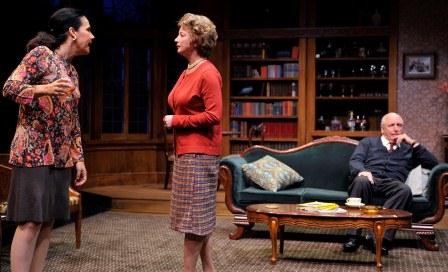 My memory of the original production (which opened at the Martin Beck Theatre on September 22, 1966) is surprisingly vague. But, as I've since learned from revisiting Who's Afraid of Virginia Woolf? and Tiny Alice, that was probably because I was much too young and naive to understand anything about chronic drinkers. There is no doubt that the kind of upscale suburban home in which Albee's play takes place was as exotic a location for me as Tahiti.

More than anything, I was curious to see how A Delicate Balance would unfold in the Aurora's 150-seat Alafi Auditorium with its three-quarter thrust stage (as opposed to a standard, 1,000-seat proscenium-style theatre). With no fourth wall offering any protection and the performers almost in the audience's laps, the result was a much greater sense of feigned intimacy, mounting insecurity, and panicky loss. 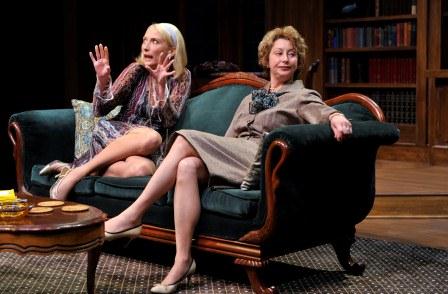 Many of the more poignant moments in Albee's play are sparked by an elderly couple with no sense of personal boundaries. His cast of characters includes: 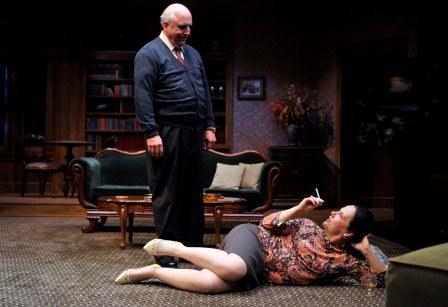 Tobias (Ken Grantham) and Claire (Jamie Jones) in a scene from
Edward Albee's A Delicate Balance (Photo by: David Allen) 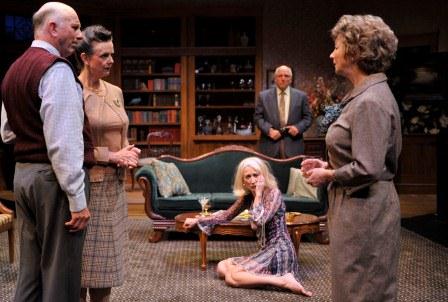