"... Alice's answers were like soap bubbles, the kind children blew out of those little plastic wands, on a windy day. They drifted away from her quickly and in dizzying directions, requiring enormous strain and concentration to track. And even if she managed to actually hold a number of them in her sight for some promising duration, it was invariably too soon that pop! - they were gone, burst... into oblivion, as if they'd never existed." 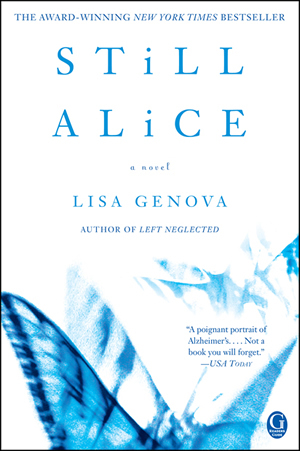 I wish there were more such descriptions in Lisa Genova's novel about the serial losses that come from memory loss, as experienced by a supremely-intelligent (formerly formidable) woman contending with early-onset Alzheimer's disease.

The descent of Alice Howland, Ph.D., is told in month-by-month chapters. Alice's disorientation, hallucinations, confabulations, frustrations, humiliations, and distress are vivid and telling.

Along with Alice, the reader tries to respond to the "exam" questions posed by a neurologist; the reader takes neuropsychological tests; and joins in the frantic searches for eye glasses, keys, wallet, phone, and meds.

As Alice's "molecular mayhem" increases, we participate in her struggle to find words, come up with peoples' names, locate memories, and recognize her own children. We feel the Alzheimer's Association Safe Return ID bracelet on her wrist. We share the alliance, affinity, and trust she derives from members of the Early Onset support group, which she initiated.

Alice's lofty perch in a rarified world
It is surely poignant that Alice, distinguished professor of cognitive psychology at Harvard (at Columbia University, in the movie), is throttled by Alzheimer's at the age of 50.

Is it academic jealousy that had me annoyed by all the references to Harvard? (Harvard is mentioned 5 times on page 96, alone; a total of 103 times in the novel, and another 10 times in the readers' guide and the author bio and conversation.)

Isn't Alzheimer's sufficiently tragic for someone who has not attained such vaunted status and stature ("a cerebral and privileged life")?

Perhaps an older and lesser professor would make for a less moving portrayal.

Disease has no regard for the highly-regarded
In Margaret Edson's Pulitzer Prize play Wit, 50-year-old (unmarried) Vivian Bearing's harrowing hospitalization for advanced metastatic ovarian cancer is all the more intense and penetrating because she is a most intimidating professor of 17th century metaphysical poetry, specializing in the Holy Sonnets of John Donne ("Death, be not proud....").

Still, I wonder if Alice Howland's academic domains and home-front circumstances distance her from some sufferers: The long-tenured, highly-esteemed researcher and sought-after lecturer Alice Howland (of Harvard) can close up her capacious Cambridge townhouse and retreat to her Cape Cod home for entire summers. She can imagine another year-long sabbatical with her Harvard-tenured husband, who has access to the very best of medical Boston. For someone dealing with such misfortune, Alice is, in a way, quite fortunate.

And, Alice has three adult children - all of whom become especially attentive caregivers, managing to incorporate Alice's needs into their busy lives. Lucky Alice.

Conflicts of Interest - Dilemmas re Devotions
Alice's husband is indeed devoted, up to a point. Perhaps that's why he's interesting, in an equivocal way. A prestigious bio-medical researcher and professor, he will have to decide whether to seize the opportunity of a professional lifetime to leave Harvard for an even more prestigious position (chair of Cancer Biology and Genetics) at Memorial Sloan-Kettering Cancer Center in New York (in the movie, the Mayo Clinic in Rochester, Minnesota).

Alice has faculties enough to be adamant: she doesn't want to leave the Cambridge, Massachusetts shops, sidewalks, and doorways that she still can recognize, occasionally. She needs what continuity, faint familiarity, and security of place that are still in place for her.

So, as to her husband, should he stay, or should he go? How much patience, devotion and self-sacrifice should be expected? Putting aside his bio-medical prestige, John Howland's emotional pulls and tugs seem relatable. They surely get caregivers thinking about how much can be absorbed, endured, sustained - and at what point to sound the call for reinforcements.

"Help - I need somebody"
Would the Beatles' song Help be on the Howlands' playlist?

Not remotely self-assured, Alice needs her husband John, "not just anybody." She's feeling down, and she desperately wants her husband to be around.

As a sign of his despair, John repeatedly twists his wedding ring. He hopes their three accomplished children (a doctor, a lawyer, and an actress) will become the caregivers Alice desperately needs, thus allowing him to move on with his research, at a distance.

Alice's life has indeed "changed in oh so many ways." Alarmingly, her "independence seems to vanish in the haze." More and more often, she feels "so insecure" - needing John like she's "never done before."

If she could recall the lyrics, Alice might plaintively sing about her struggle to get her "feet back on the ground" and plead, "Won't you please, please help me."

Alice Munro depicted an Alzheimer's descent and a husband's caregiving
The movie Away from Her adapted the Alice Munro short story in which a retired college professor struggles to do right by his wife who is exhibiting all the signs of Alzheimer's. They do not have children. After wandering off, the wife, clearheadedly, makes the decision that her husband has resisted: "You know what you're going to have to do with me, don't you?" 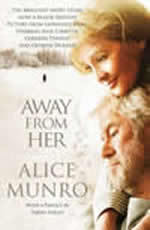 The story offers a full tour of a very clean and bright assisted-living facility. The depictions of the residents and their interactions with family and staff only heighten the husband's wishful thinking and denial of what has become apparent to his wife, even in her dementia.

The conversations between the husband and an especially empathetic and insightful nurse are instructive. He fends off alarms about his wife's withdrawal that are sounded by the facility's severe senior administrator. In those scenes we wonder if Alzheimer's suffering can plateau and be stemmed for extended periods. If not, how best to deal with the deepening descent when life on the skilled nursing floor (for the "progressed" cases) is so lifeless?

In Still Alice - a novel infused with the Web sites of support networks - Lisa Genova ventures some thoughts in that direction.

A keener eye from observing a grandmother's travails
A grandmother's Alzheimer's was the main inspiration for Still Alice. Lisa Genova recalls the sadness and helplessness of witnessing "an intelligent, independent, vibrant, and active woman systematically disassemble."

Genova explained that the beloved grandmother "didn't know her kids' names, or that she even had them (she had nine). She didn't know where she lived, couldn't realize that she needed to go to the bathroom, couldn't recognize her own face in the mirror."

The screenplay for Away from Her was written by Sarah Polley who, at 27, directed the film adaptation - prior to Munro being awarded the 2013 Nobel Prize in Literature.

Alice Munro's story gave Polley "a keener eye" into her grandmother's losing her memory, losing her grip on independence, and losing her home. In her Preface to the Vintage republication of the short story, Polley recalled her grandmother "finding the day-to-day struggle of living alone was becoming too much for her, and as her memory began reforming itself, she began to forget basic facts of her own history, glomming onto passages and songs from a lifetime ago that had an elusive relevance she couldn't finger."

It may well be that a once-familiar tune or orchestration can, for some few moments, bring an Alzheimer's sufferer back to cognition.

Digital music technology is being employed to awaken authentic memories for Alzheimer's patients. In the 2014 documentary film Alive Inside, we see how nursing-home patients are reconnected to their more memorable times by personalized playlists that have been logged onto individually-customized iPods, distributed through the outreach efforts of the non-profit Music & Memory.

Bequests from Alice Howland and Alice Munro
For those of us with Alzheimer's plaques, tangles, and gene mutations lodged in our family histories, there are useful urgings in the nonfiction portions of Lisa Genova's storytelling.

Those of us who are beginning to exhibit the signs, might be encouraged to -
• seek testing, sooner rather than later.
• look for, search for, articles delivering news about drug trials and other investigative treatments.
• become more mindful of our lapses, so as to devise tactics and strategies for holding onto tangibles and intangibles, while we can still devise reclamations.
• make lists of favorite songs.
• caption family and other meaningful photos, while we can still recall time and place, and people.
• write out, or adopt, well-considered Advance Directives and a well-considered Living Will.

The will, and time, to reflect
As I searched my notes for this review, as my fingers hovered over the laptop keyboard waiting for the upstairs neurons to tell the fingers what to tap and how to "save," I wondered if there would come a time when the hesitations would become longer, more pronounced and troubling.

"The Care and Management of Mortality" re Being Mortal: Medicine and What Matters in the End
by Dr. Atul Gawande

In a February 19, 2015 New York Times op-ed column, 81-year-old Oliver Sacks, professor of neurology at the New York University School of Medicine, wrote about how he planned to spend his remaining time, after learning that his cancer had become terminal.

He hoped for the clarity "to achieve new levels of understanding and insight." His focus: "There is no time for anything inessential."

Deciding what is essential, while decision-making faculties still function
We root for Alice Howland. We are relieved, even heartened, when (with a "lick-and-turn technique" embedded from childhood) she adroitly rotates an ice cream cone and captures the goodness to forestall any drop or drip.

We admire her determination to run, do yoga, and meditate to try to slow cognitive degeneration.

We examine our own fears and fates as Alice's mind enviously, yearningly, swaps cancer for dementia. It trades off the professional and social shunnings that come with mental decline for what her mind takes to be the enviable heroics and regard accorded to those battling cancer.

From dialogue on the page and the discourse in her head, we learn where Alice Howland is coming from, what she'd like to hold onto for a bit longer, and what has been disappearing from her mental storage facilities.

"The name and address. She had a loose sense of it, like the feeling of awakening from a night's sleep and knowing she'd had a dream, maybe even knowing it was about a particular thing, but no matter how hard she thought about it, the details of the dream eluded her. Gone forever."

"... I have no control over which yesterdays I keep and which ones get deleted."

Though few of us enjoy the prospects and prestige afforded the Howlands, Lisa Genova has provided scenes and self-examinations that make us very aware of Alzheimer's progression and takings. From the encounters with medical professionals, and moving moments with fellow sufferers as well as caregivers, the novel provides insights and promotes understanding.

Though anxious about such personal histories, we are eager to learn from them. In time, they may become very essential for many of us, and help us to reallocate our time and priorities - to redefine what is essential. Perhaps that is the essential message we can take from Still Alice.