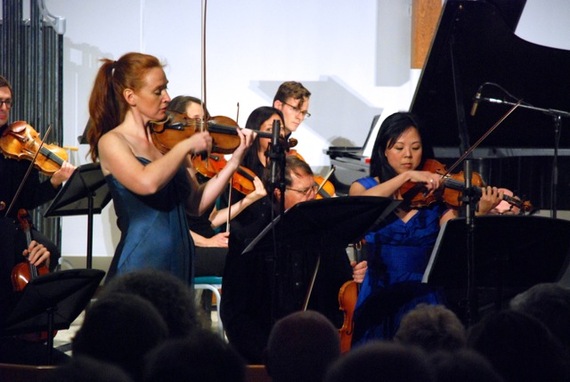 Listening to Jacaranda Music's last concert of its eleventh season, two opposing thoughts struck me. One was astonishment that its first decade (the anniversary was last October) had flown by so quickly and the other was amazement that the series hasn't always been here. It's hard to imagine the Southern California music scene without Jacaranda's "Music at the Edge of Santa Monica" shaping and defining it.

The sobriquet is accurate; the series holds forth a few blocks from the edge of the Pacific Ocean (in the acoustically superb First Presbyterian Church) and it is known for its edgy mix of eclectic music. Featured works have extended as far back as the beginning of the eighteenth century and as near to the present tense as world premieres. But it's not the chronological span of its repertoire that defines Jacaranda so much as its mission to crown the essential musical canon of the twentieth century.

It was a troubled, messy hundred years, along with its music, and Jacaranda has taken on its significant sounds one concert step at a time. Take for example the evening that tweaked my interest a few weeks ago, one of those typically diverse affairs where the connections may not be all that apparent, even as you read the extensive (and delightfully idiosyncratic) program notes of Artistic and Executive Director Patrick Scott, who helms the series with Music Director Mark Alan Hilt.

The program on this evening was something of a victory lap for Jacaranda. Titled "Abandon," it included works by Mozart and Debussy that had featured on earlier occasions, with two obscure pieces by Estonian composer Arvo Pärt. On paper the kindredness of these composers to each other seemed remote, but in the hearing, each work shared within its own delicate frame an aural sensation not unlike that of parting curtains on a summer's day to reveal intense outdoor illuminations. 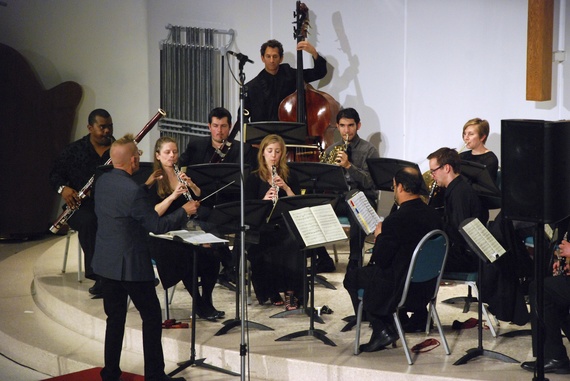 The Serenade for Winds ("Gran Partita") is a work of early maturity composed during Mozart's heady first years in Vienna. Describing its elusive beauties in technical terms is as hopeless as examining how a box-pinned butterfly flies. Peter Shaffer's Amadeus has a lyrical passage that comes close to its magic, as the playwright's alter ego, Antonio Salieri, muses on the celebrated slow movement:

It started simply enough, just a pulse in the lowest registers, bassoons and basset horns like a rusty squeezebox. It would have been comic except for the slowness, which gave it a sort of serenity. And then, suddenly, high above it sounded a single note of the oboe. It hung there unwavering - piercing me through - till breath could hold it no longer and a clarinet withdrew it out of me and sweetened it into a phrase of such delight it had me trembling... I was suddenly frightened. It seemed to me I had heard the voice of God.

The "Jacaranda Winds" dream-team of fine players -- stand-ins for the voices of God -- were led by a supple and expressive Hilt. Mozart intended the oboes and clarinets to have the featured roles, and they were indeed glorious here. But in truth the composer gave each of the sonorities its moment in the sun: the oboes of Claire Chenette and Claire Brazeau, the clarinets of Joshua Ranz and Andrew Leonard, the basset horns (alto clarinets) of Gary Bovyer and Steve Roberts, the bassoons of Anthony Parnther and Maciej Flis, the horns of Allen Fogle, Paul Klintworth and Sarah Bach. All were ably underpinned by Nico Abondolo's string bass. (Special recognition must be granted, however, to Anthony Parnther, whose bassoon provided magnificent passagework and the ultimate in tonal purity.) 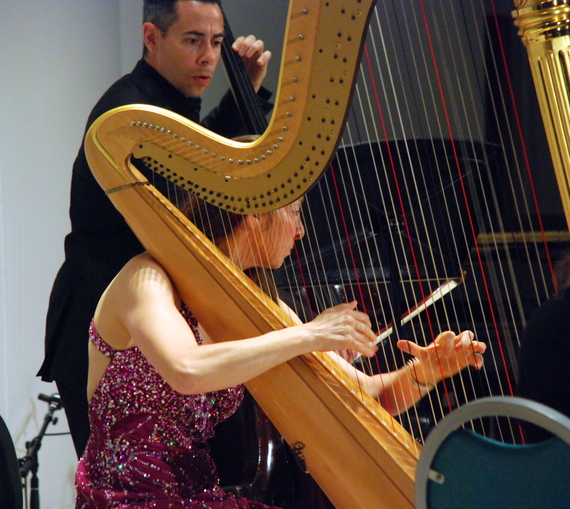 Claude Debussy's Danses Sacrée et Profane delivered another opportunity for aural sheen. The work, for harp and a string quartet with added bass, is a spiritualized mélange of erotic religious dances. At the turn of the nineteenth century, the steamy side of ancient cultures was in titillating musical vogue. (Strauss's Salomé and Stravinsky's Sacre du Printemps come to mind.) A friend of Debussy's devised a literary fraud, purporting to have discovered, then translated, risqué poems etched on the Greek tombs of antiquity. We can thank those arty concoctions for the composer's delightful work, which sings in an ethereal sensuality comparable to Maurice Ravel's more famous harp vehicle, the Introduction and Allegro.

Maria Casale's effervescent pedal harp was given extra visual sizzle by the instrument's radiant sheen, far surpassing the more burnished colorations of other golden harps. With the First Presbyterian Church's solemn cross just above Casale's harp, all that was needed was a good dose of stage fog to evoke the Elysian Fields on a libidinous day. Casale's stunning virtuosity, with good support from her strings, put the work over in fine form and it was a great hit with the audience.

Two works by Estonian composer Arvo Pärt rounded out an evening of raptures. Darf Ich of 1995-99 and Tabula Rasa of 1977 are separated by twenty years, but they share similar musical territory. Their composer is often described as a "holy minimalist" for his aim to achieve musical "tintinnabulation" while straddling interweaving strands of sin and forgiveness; also for his spare musical textures that seem to stop time and look deep into the heart's sad recesses. 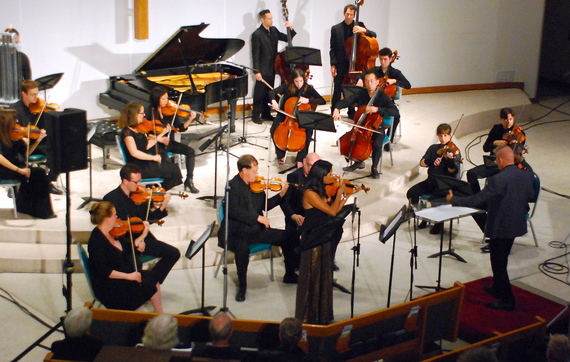 Darf Ich, for solo violin, string ensemble and chimes, was written in memory of Yehudi Menuhin. Shalini Vijayan provided the seraphic solo in the short concertante work that meditates, with piquant dissonances and high-flying sighs, on falling tears over a grieving multitude. Jacaranda's program notes suggested the performance might have been a Los Angeles premiere.

Tabula Rasa is a two-part work for two solo violins, string ensemble and a prepared piano (picture at top of page). Pärt specialist Paul Hillier has described its first movement as a series of separated silences that grow shorter until overwhelmed by a loud cadenza, with a quiet second movement that slowly unwinds into another silence. I found the unwinding portion the most compelling, with its undulating waves of floating tenderness and wistful dissonance. Both Pärt works featured solos of gently stabbing notes in the highest reaches of the violin's E-string, becoming in the second one a haunting, obsessional trope.

Both works were conducted with sensitivity by Hilt. Richard Valitutto's prepared piano added the spooky atmospherics and the "Jacaranda String Ensemble" supporting sonics in the second piece. But it was the solo violins that emerged as the evening's stars in both works. Thereza Stanislav and Alyssa Park lobbed stratospheric notes of uncanny beauty and perfect intonation to each other in the imitative passages of Tabula Rasa that, to bring off properly, required a laser-like concentration, which was just what each of the artists gave to her performance.

With Shalini Vijayan in the earlier work, the three soloists in these relatively short pieces by Pärt seemed almost like luxury casting. In fact, all three violinists are regulars on the series. Park and Vijayan are in the Lyris Quartet, Jacaranda's house ensemble, and Stanislav, a frequent guest soloist, is Assistant Concertmaster of the Los Angeles Chamber Orchestra at nearby UCLA.

The evening reminded those present that the last century produced works not just of noisy angst but also of profound delicacy and inwardness. Southern California's good fortune is to have instrumentalists who regularly provide such stylish interpretations as were on this occasion encountered. But it was also the sensibility and resourcefulness of of Jacaranda Music's leadership that had brought these artists and works together, enabling their audience to "abandon" all earthly concerns for a couple blissful hours. The concert was a fitting close to Jacaranda's current season and to its past and newly launched decades of matchless connoisseur programming. 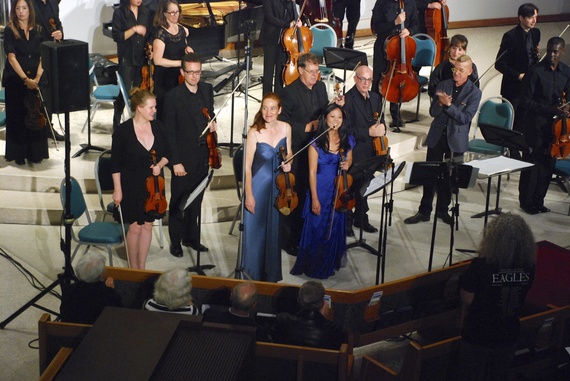 Photos by Andrea Sanderson used by permission of Jacaranda Music (top to bottom):