Yesterday I saw an article about Zach Miko, a model who is of a larger size...in the modeling world I suppose this means he eats at least one square meal a day, possibly more. It represents the 'male' version of models that women have embraced in the last few years...models who look like we do. It may seem like a new thing, at least for men, but it's not really true.

When I was about 11 I gained a lot of weight like many young boys do. Heading to Sears-Roebuck on Court Street in 1968, I found that the only jeans that would fit were in a line called 'Husky".

Husky. HUSKY. A somewhat nicer way of saying you were fat. In this ad from the old catalog I would be the young man on the right. 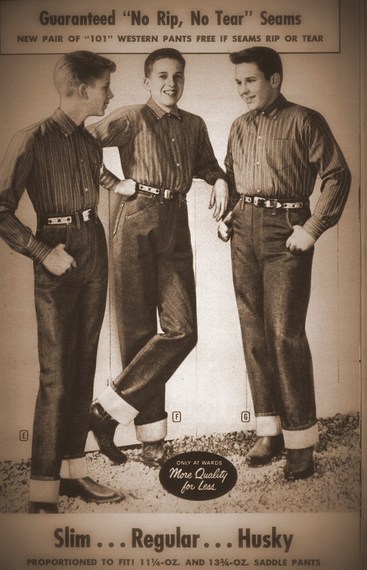 The thing about Husky Jeans is that they did nothing to help you pretend you were not a Husky, which is what all Huskies desperately wanted. On the label on the back of the jeans was printed the word HUSKY in six inch bold letters...it settled any confusion others might have as to whether you were a Husky or not...it couldn't have been any more indelible in their minds than a tattoo of the same on your forehead.

Of course it was more than apparent to all that I was a Husky...if I had bought a pair in white, they could have screened a movie in CinemaScope across my backside. I always was confused about relatives who felt called upon to point this out...adults with a great deal of added avoirdupois on the back of their own laps. I would rarely hesitate to point this out to them, and for that was considered a young man with a sassy mouth. I always thought they were just older people with sassy mouths.

In the end, I suppose I still remain a Husky, if not always in body, but in mind. I was about 15 pounds overweight then, and am about the same now...but all of the stick-figured, emaciated boys of my youth have caught up with me, some with rather stunning results as they overachieved in the area.

Congratulations to the fashion world and to Zach Miko who will, for men, at least represent what most of us look like...imperfect, slightly on the Husky side, not totally proportional...in other words, human.

A much more apt description. Human.