The sun is a stormy star that, across the centuries, has gifted our Earth with some incredible moments of calamity. Telegraph and radio technologies and even satellites and human safety have been placed in the breach of near-destruction. Is there a major "superstorm" in our future?

The Past as Prologue

What would you do if the sky turned blood-red all night, and so bright that you could read newspapers by this ghastly sky? What would you think if, for a day, all communications out of the country ended, or your cellphones stopped working? How do you think people would respond if their electrical power went out for several days or longer... in the hot air-conditioned summer? 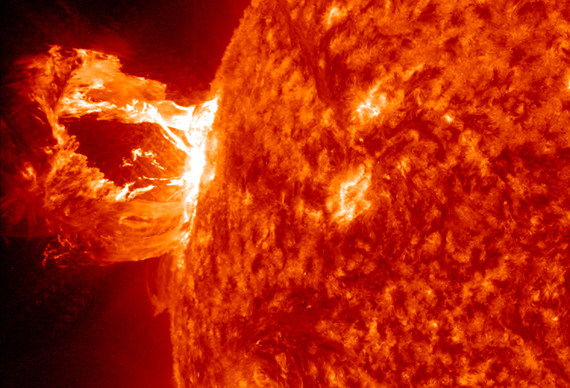 A solar storm in the making (Credit: NASA/SDO)

This is usually how scientists start this discussion of potential impacts that solar storms can have. The end result is still the same old public indifference. You can't really blame the public. These kinds of events seem so very remote from this morning's newspaper headlines of the last major snowstorm or hurricane. Most of us have never even seen an aurora, but most of us have all experienced the deadly consequences of a severe rainstorm, flooding or snowstorm. On a scale from 1 to 10, solar storms are irrelevant. Even worse, when they arrive, they are a festive event as people flock outside to admire the pretty colors in the sky. No matter how strenuously scientists and engineers try to elevate public concern about solar storms, the reality is that there is not one single documented case of anyone ever dying from a solar storm!

It Sucks to Be a Space Weather Forecaster

But people don't have to die to make a compelling news story. Over the last 200 years, every technology we have deployed has been affected by solar storms, which in many cases have crippled our social network of communications and electrical power distribution. The fact that you, personally, were never there to experience the hubris and social calamity of what these storms were like is irrelevant. The last major power outage happened in the legendary blackout in Quebec in 1989, but we have had several near-misses since then that would have taken down the entire North American power grid. Whether or not you are an aficionado of the old-style telegraph and short-wave communication systems, the outages visited upon the public by solar storms over the last century still provide a cautionary tale. The sun is still a stormy star, and our communications networks are still vulnerable to failure during a major storm. It's really all a matter of luck. The major solar storm of July 23, 2012, would have been a social catastrophe had it been ejected from the sun merely a week earlier. Earth lucked out in that it was in the wrong part of its orbit. And it was merely luck. The sun produces several of these "superstorms" every 11 years. Like Clint Eastwood said, "Are you feeling lucky?" 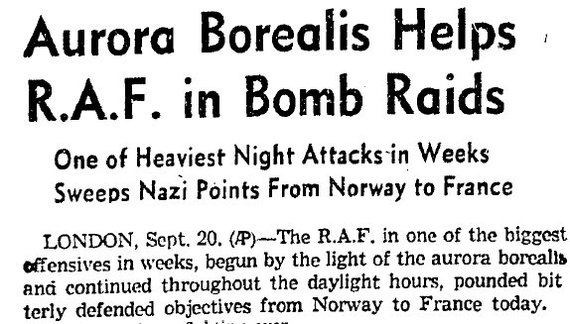 Historical record is a great place to go to see how our parents and grandparents dealt with solar storm events. The New York Times used to print these stories on the front page for over a century, until the 1950s. Then they were quietly relegated to the less-traveled sections of the paper or ignored entirely. If you want to read more about the personal experiences of people living through the last 200 years of solar hubris, have a look at the books like Solar Storms: 2000 Years of Calamity for an eye-opening tour of some of the great moments recorded in newspapers and diaries since the 1800s. It includes a litany of critical technologies routed by Mr. Sun, and a sense of the sheer psychological terror that people felt as their skies turned blood-red. You will read about people going insane thinking the world was about to end. You will hear about the successful bombing raid of London by the Nazis thanks to the illumination of the aurora. There are also many documented stories of lost submarines, failed satellites, and power failures to round-out the story.

That Was Then... This Is Now

Yeah, I know. You are probably asking yourself, "Why should I care, today, about how people felt yesterday?" Because for as long as there have been humans, we have always wanted to predict what our future experiences will be like. This practical curiosity about the future has saved our butts countless times over the centuries and millennia. With space weather we are in the same boat. It is a new phenomenon, much like tornadoes were to early western settlers of North America. To them, learning about yesterday and family tales of past tornado encounters helped them survive and anticipate the next-seasons events.

Scientifically, we know that strong space weather storms can shut down electric power grids, give you a dose of radiation as you fly to Paris, or shut down that specific satellite that gives you your GPS location or tells you about that snowstorm about to cover your house with a foot of snow. Because humans today are no different in temperament from those who walked the streets a century ago, we can learn a lot about likely human behavior today by looking backwards at how people reacted in previous storms. It's all there, written in the newspaper stories, and a dramatic testament to human misunderstanding, superstition and fear. 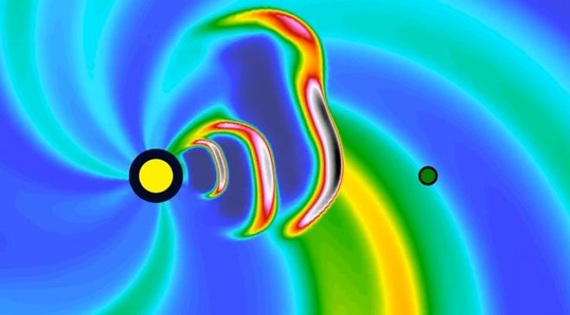 But in some cases we see the emergence of breathtaking islands of wisdom and calm. This didn't happen by accident but because scientists painstakingly figured out how the whole space weather phenomenon works. The earliest news reports from the 1800s actually featured a wizened astronomer describing how telegraph outages and the Northern Lights were caused by sunspots. Over the course of a few more decades, instruments were developed that could watch the sun for particularly nasty-looking sunspots and sound an alert. This was especially important during World War II, when the D-Day Invasion was timed to take place when the sun was least active. Once solar physicists and geophysicists got their hands on some very cool data during the Space Age and access to supercomputers, their predictive abilities improved by leaps and bounds. The sun still randomly generates these storms, but now we can give several-day advanced notice.

There is still nothing we can do about these storms other than get our vulnerable technology "out of the way," so when they inevitably happen, you and I will still react to them as humans. A major superstorm capable of taking down our society for weeks or months is still a reality, but like the inevitable Great California Earthquake everyone is waiting for, all we can do is prepare for the worst and hope for the best.