At least $23.8 billion in corporate tax breaks have been included in the $825 billion economic recovery package in order to win backing from key business groups and their Congressional allies, even though the team that put the legislation together believes the breaks have little value in stimulating the economy and creating jobs.

"Everyone knows these provisions are not going to do much, but some members of Congress need to be able to say 'the bill has a business tax cut.' So we put them in," said an Obama transition team architect, adding that the corporate breaks were carefully written to be temporary so that the drain on the treasury will be brief. According to another source: "This is just one of those things that you do to get a bill passed. It may not be pretty. We are talking about billions, but in reality it's only a tiny fraction of the whole bill."

One of the controversial corporate provisions was tried out earlier this decade, and critics have questioned its value in creating jobs or encouraging new capital spending.

Jason Furman argued -- before he became top deputy to Larry Summers on the White House National Economic Council --- that 2002 and 2003 attempts to spur the economy through accelerated depreciation of corporate investments, a process tax specialists call "bonus depreciation for business investment" or "partial expensing," was not "very effective in spurring economic activity."

Similarly, a detailed study of the same provision issued by the highly cautious Federal Reserve found that "examination of a sample of corporate tax returns and of survey data provides only limited support for the effectiveness."

The Congressional Budget Office, in turn, said about the business tax cut that the "impact on investment has been relatively modest."

Citizens for Tax Justice has raised similar critiques in a report that deals with the tax aspects of the current Democratic and Republican stimulus proposals.

The '02-'03 accelerated depreciation provisions expired in 2005. The House and Senate versions of the 2009 economic stimulus package include a temporary restoration of these measures, at a cost to the Treasury of $5.3 billion.

President Obama, calling for approval of the overall stimulus plan, declared on January 8: "There is no doubt that the cost of this plan will be considerable. It will certainly add to the budget deficit in the short-term. But equally certain are the consequences of doing too little or nothing at all, for that will lead to an even greater deficit of jobs, incomes, and confidence in our economy....at this particular moment, only government can provide the short-term boost necessary to lift us from a recession this deep and severe. Only government can break the vicious cycles that are crippling our economy."

While questionable on economic grounds, the business tax breaks appear to be achieving as least some of their political goals. One crucial business organization, the National Association of Manufacturers (NAM), is generally supportive of the legislation, and strongly backs the corporate tax cuts.

She praised both the House and Senate versions of the stimulus, noting that the Senate bill as sponsored by Finance Committee chairman Max Baucus (D-Mont.) has additional benefits for companies seeking to buy back debt at discounted levels, and a refundable tax credit for certain firms making investments, at a cost to the Treasury of $805 million over ten years.

The U.S. Chamber of Commerce is one of the big winners so far, after successfully conducting a full court press to win inclusion in the Senate bill of a $511 million break for companies buying back debt. The provision is especially important to troubled companies facing big mortgage payments or other debts coming due when lenders are not willing to offer refinancing. A Chamber letter promoting the bill to members of Congress was signed by hotels, resorts and casinos (MGM Mirage, Morgan's Hotel Group, The Greenspun Corporation, Vail Resorts, Inc., Pinnacle Entertainment, Wynn Resorts, LTD); phone, cable and dish providers (Dish Network, FairPoint Communications, Frontier Communications Corporation, Liberty Media, Quest Communications, Sprint); and such major commercial and residential real estate companies as CB Richard Ellis, Hovnanian Enterprises, M.D.C. Holdings, and SARES*REGIS.

If enacted, companies could buy back debts in 2009 and 2010 for less than the original amount of the loan and postpone paying taxes on difference. "One feature of the current crisis is that the debts businesses owe to banks have plummeted in value as economic conditions worsen," the Chamber wrote, arguing for the break. "This poses a unique opportunity - businesses could use their cash to buy back their debts at a fraction of their face value....The most significant obstacle to this wave of refinancing is the tax code. If a business can buy back a dollar's worth of its own debt for 75 cents, the tax code now stipulates that it must recognize the 25 cent difference as income and tax must be paid on it."

A far more expensive provision in the legislation -- $5.3 billion -- would allows corporations to sharply accelerate depreciation of investments in 2009, effectively permitting half the cost to be written off for tax purposes -- a process called partial expensing -- in the first year.

Citizens for Tax Justice did a study of the effect of this provision by examining corporate investment patterns before and after passage of the similar '02 and '03 proposals expanding write-offs for accelerated depreciation, and found that the measure "failed to increase capital investments when it was tried our earlier this decade... it had virtually no discernable positive results." 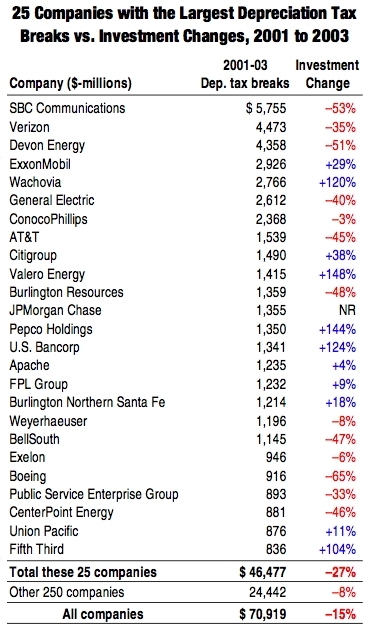 If the $5.3 billion in partial expensing is not enough for American business, there is an even bigger, $17.2 billion break thrown into the current stimulus package that would allow currently unprofitable companies suffering losses in 2008 and 2009 to write those losses off against past taxes for up to five previous years. These firms would get a check from the Treasury for what would become past "overpayments." In the arcane language of tax lawyers, this is known as "a five-year carry-back for net operating losses," virtually insuring that no one other than tax professionals will understand what's going on.

The operating loss provision, even though it would be on the books for only two years, brought joy to the heart of John Engler, president of the NAM: "Allowing companies in a downturn to 'carry back' current losses to earlier, profitable years, will free up funds that can be used for investment and job creation," he said.

But that is unlikely to happen soon. Cutting corporate tax rates is just what the Obama folks do not want to do because when and if the recession recedes, any attempt to restore the rates will be called a tax hike.