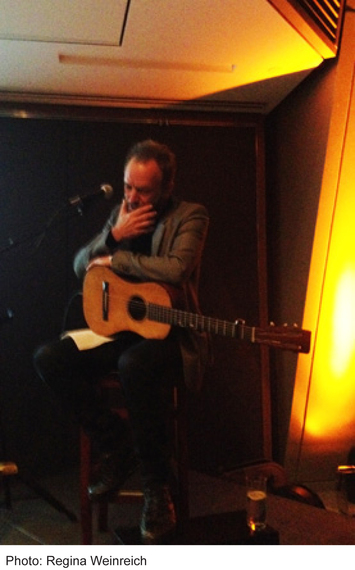 A master storyteller in the tradition of medieval balladeers, Sting recounted a childhood experience at a celebration this week of his The Last Ship from the River of the Northern City, a handcrafted boxed edition of his Last Ship lyrics with woodcuts by "luminist" painter Stephen Hannock, published by Two Ponds Press. Growing up in his Northern English city of Newcastle, near Scotland and water, Sting used to attend official ship christenings. Because dignitaries and royals would attend too, his mother would dress him in Sunday best, attire he hated. Once he saw the queen there, and in a moment fantasized that they had made eye contact, a personal connection. He saw the fancy automobile in which she arrived and imagined a different life from the one he was clearly destined for. And now of course he lives in Manhattan. He pointed to the spectacular panorama from the 44th floor of the Hearst Building, and, accompanying himself on guitar, sang: "Dead Man's Boots," "The Night the Pugilist Learned to Dance," and "The Last Ship."

In a display case nearby, the work had a modest viewing. Attendees could feel the hand crafted paper, and were shown how 26 color inks were used in a particular piece, an Old World street scene. Two Ponds Press founders Liv Rockefeller and Kenneth Shure, from Rockport, Maine had just returned from Paris. Everyone was still reeling from the terrorist attacks of the weekend, but everyone was eager too to celebrate our rich culture very much a target of attack, and in ample evidence in the work of Sting, Hannock, and the artists who made the edition: Master printer Brandon Graving at Gravity Press Experimental Printshop and executed by Arthur Larson at Horton Tank Graphics.