Have you ever hugged a giant portabella mushroom? I hadn't either until I visited Stingray City in Grand Cayman. If you love unique animal encounters, I would suggest taking a trip out to this close encounter with the fish kind in the blue waters of the Caribbean.

Stingray City is not a real city per se but locals have told me countless stories of poor lost tourists in their rented mini cars asking for directions to the Stingray City Bridge. The "City" is a sand bar and shallow stretch of sand in the middle of Grand Cayman's North Sound. Legend has it the Fishy Metropolis formed way back in the day when fishermen, done with the day's catch, would anchor in the shallows of the bay to clean and gut their fish. The fishermen tossed the offal overboard into the shallows attracting the Southern Atlantic stingrays. Soon a feedback loop emerged: stingrays began to associate the sounds of the approaching boats with food, and the fishermen started tossing the guts to attract the rays and create some entertainment.

So how do you experience these gentle giants for yourself? Operators around the island offer tours and charter boats to Stingray City. On this trip I went on a chartered catamaran with Red Sail Sports, leaving from Rum Point on the island's north shore. When you arrive to Grand Cayman yourself, ask your hotel or local accommodation for their recommendations, who knows, they may even know a local willing to take you out on their boat for cheap! Most tours will go to the sandbar, a perfect place for those looking for a beginner's introduction to stingrays.

The sand bar is about three to five feet deep and means that you need no gear other than a swimsuit to hang out with the rays. Luckily when our boat arrived, we were the only other group there. True to legend, the motor stopped, and as I looked out over the water, huge black circles began drifting over to our ship.

Southern Atlantic stingrays are a type of fish named for the barb on their tail. While poisonous, the rays in Stingray City are mostly calm provided you are calm and cautious around them -- no grabbing rays by the tail and swinging them around like a field athlete about to do a hammer toss.

The rays are uniquely adapted for life along the bottom of the ocean, with disc shaped bodies able to effortlessly glide along the sea floor and powerful hoover-like mouths able to vacuum up any crabs or mollusks hidden in the sand. In fact, stingrays have electro-sensory perception that allows then to sense their prey buried in the sea floor. Rays are so great at finding these ocean delicacies that bottle nose dolphins have been observed shadowing stingrays as they hunt, stealing octopus and other treats after the rays have done all the hard work. And you thought those dolphin smiles were friendly...

But I digress. Back on the sandbar, we step down the catamaran stairs and into the water with the rays. Immediately they clamor over us, some even coming up out of the water as they search the eager tourists for food and friends.

From the boat crew we learn some of the rays have been coming here for years. "Frisbee" is so named because she lost her tail and is one of the easiest resident rays to identify. "Scarface" is also an easy resident to spot because of the large chunk taken out of his nose. The rays flock and swarm around us like giant black puppies, searching us for scraps of squid and friendly pat. The boat operators help this search by affectionately rubbing "squid cologne" on some willing -- and not so willing --swimmers.

As one who got rubbed with squid myself, let me tell you the scent is strong, and you will make stingray friends if you get some on you. If you think your weird aunt's sexually repressed Chihuahua humping your leg is awkward, wait until a giant four-foot-wide giant black fish is doing the same. At least the Chihuahua doesn't have a barbed tail.

While we were excited to keep hanging out with the rays, eventually they tired of us and looked for new groups with food. We re-boarded our catamaran, set off for another snorkeling spot and eventually turned back into Rum Point. If you take a venture down to Grand Cayman and need a break from lying in your beach chair, I highly suggest making your own journey to the city -- just remember you can't drive there yourself. 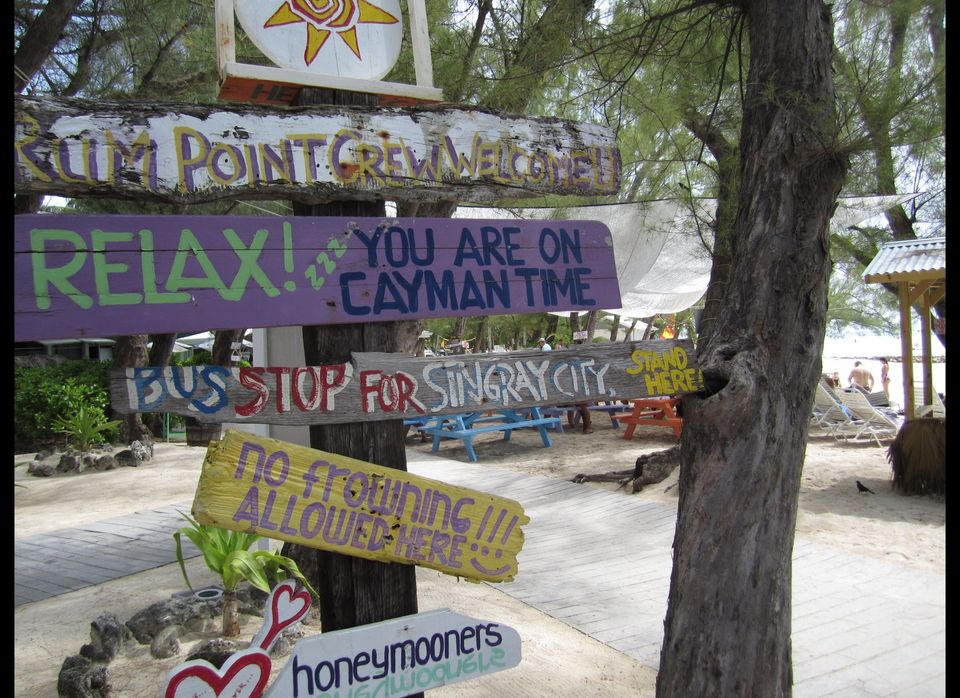