Thailand, it turns out, is home to some massively large freshwater fish.

The country currently holds the world record in the category thanks to a 646-pound catfish hooked in 2005, but last week, researchers caught and released a giant freshwater stingray in the Mae Klong River that may set a new record.

According to National Geographic, the ray was pregnant with two fetuses and measured 14 feet long and nearly 8 feet across; researchers estimated that it weighed around 700 to 800 pounds.

The ray's dimensions have not yet been confirmed by Guinness World Records, but she's set up for fame either way: TV host Jeff Corwin, who was filming for ABC's "Ocean Mysteries with Jeff Corwin," helped capture the cartilaginous fish and said the ray's story will be used in an upcoming episode.

The ray had previously been tagged and measured in 2009 for a program run by Nantarika Chansue, a veterinarian and professor at Chulalongkorn University in Bangkok. Chansue was among the researchers who helped haul it in last week and discovered that in the past six years, the ray has grown 8 feet wider but lost about a foot of her tail -- which is not unusual for stingrays, according to the Washington Post.

Corwin said the pregnant stingray, caught about an hour outside Bangkok, is a ray of hope for conservationists. Thailand "is not unique in problems like waste and plastic and litter," he told USA Today, adding that the ray "tells us that there's hope for conservation despite living in an uncertain world because of pollution and habitat loss."

Below, watch the moments that Nantarika Chansue, Jeff Corwin and their team of researchers handle the giant freshwater stingray before releasing it back into the wild.

PHOTO GALLERY
This Might Be The World's Largest Freshwater Fish
Download
Calling all HuffPost superfans!
Sign up for membership to become a founding member and help shape HuffPost's next chapter
Join HuffPost 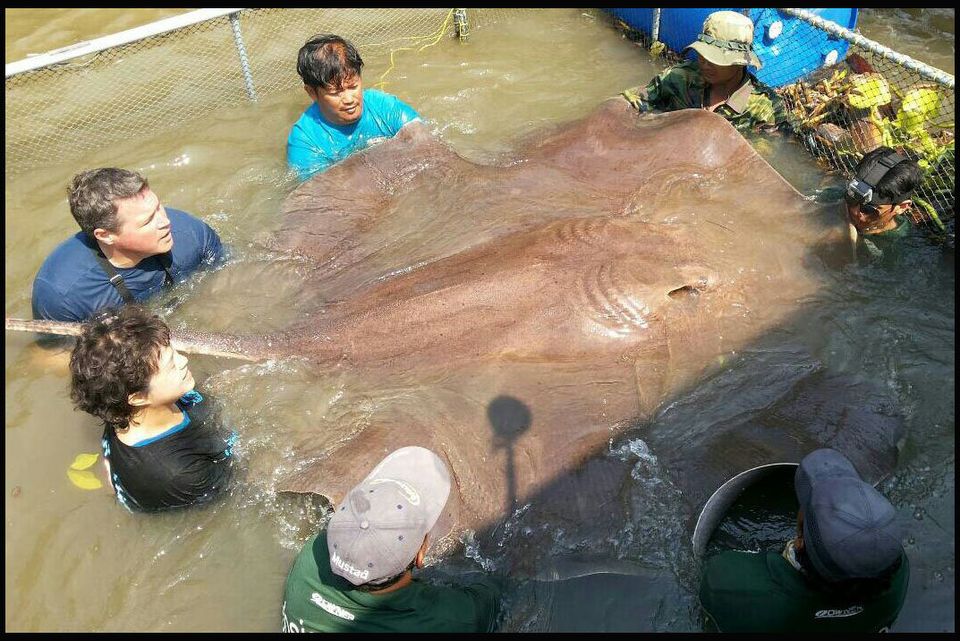