NEW YORK -- There's a dark force out there that's been hammering stocks indiscriminately, with no regard for individual companies' statements of financial health: the economy.

Unlike in quiet times, when stock traders respond to reports of individual companies' earnings, today's grim economic climate has financial players treating different companies similarly -- as they evidently fear that a deteriorating economy could spell trouble for all. The outlook is so gloomy that even when a particular company produces a positive piece of news, that tends to get drowned out by the overriding concern.

More than ever on record, individual stocks in the Standard & Poor's 500 Index are moving in unison, according to data from the stock market research and money management firm Birinyi Associates. The so-called correlation coefficient -- in which a reading of 1 means stocks move in perfect tandem with the index -- was 0.84 on Tuesday, measured as a 50-day average.

That's equal to the highest reading ever, first achieved last Thursday. And it beats the previous record of 0.83, which was set on October 19, 1987, a day known as "Black Monday," when the Dow Jones Industrial Average erased $500 billion of its value in the index's largest single-day percentage drop ever.

"When you have overriding political considerations hanging over the market, all stocks are going to respond in kind," said Andrew Lo, a professor of finance at the MIT Sloan School of Management.

"It's not just stocks. It's actually all asset classes," said Lo, who is also the chairman and chief investment strategist of a hedge fund. "The U.S. dollar relative to other currencies, gold, oil and hedge fund returns have now all become very highly correlated."

Decisions are being driven by fear. On Monday, August 8, the first trading day after the rating agency Standard & Poor's downgraded the long-term sovereign debt of the United States, the corporation Tyson Foods reported earnings that were above analysts' expectations.

Typically, a strong earnings report causes a company's stock price to rise. But not so with Tyson. At first, the company's stock opened above Friday's closing value, after earnings were reported that morning. But then, after a harrowing day of trading, the stock closed 6.11 percent below its opening price.

The S&P 500 Index, of which Tyson is a member, closed down 6.66 percent that day. Every stock in the index ended the day in the red.

"The question is: what's going to happen to the U.S. economy? If something bad happens to the U.S. economy, earnings are going to fall across the board," said Gus Faucher, director of macroeconomics at Moody's Analytics. "If we get a piece of economic data that looks like the economy is in trouble, then that drives down all stocks. That swamps any particular information we get on a particular company."

There's a saying in financial circles that during a crisis, correlations go to 1, as investors dump all sorts of assets.

On the first trading day after the downgrade, the 50-day average of correlation in the S&P 500 was 0.8, according to Birinyi Associates. It has climbed since then, reaching 0.83 on August 11, and then 0.84 last week.

With investors anxious, stock volatility has surged. The Chicago Board Options Volatility Index, known as VIX, reached 48 on August 8, its highest level since March 2009, when the financial crisis was still fresh.

The swings have been wild. The Dow's drop on August 8 was its sixth worst single-day point loss of all time. Three days later, the index climbed in its eleventh highest point gain ever.

SEE THE CHART BELOW, FROM BIRINYI ASSOCIATES: 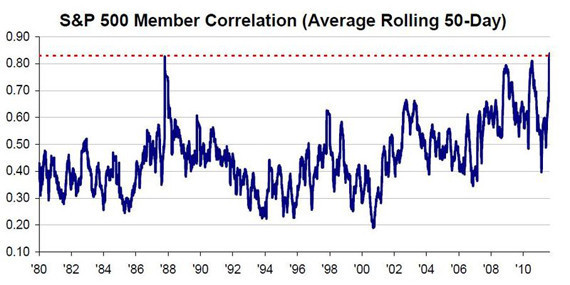