Wall Street suffered more losses Tuesday as stocks fell for the fifth straight day, in the worst start to a year since 2008.

Stocks fell with the price of oil, which has been plummeting for months to its lowest levels since the financial crisis and Great Recession. Falling oil prices hurt major oil companies, and investors fear they are a sign of weak global economic demand that could weigh on U.S. growth and corporate profits. European shares also fell amid political tumult in debt-plagued Greece. 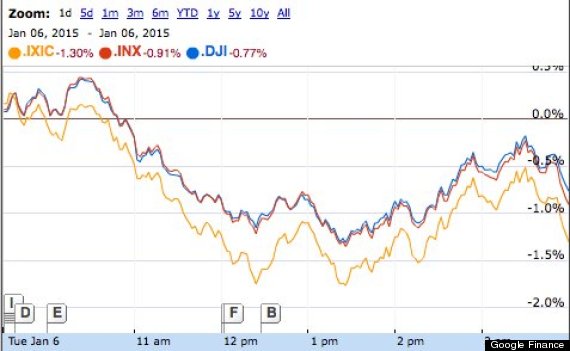 The Dow Jones Industrial Average is indicated in blue, the S&P 500 is in red and the Nasdaq composite is in yellow.

More on financial markets at the start of 2015 from the Associated Press:

NEW YORK (AP) — The U.S. economy ended last year on a tear, but financial markets are saying the outlook for this year is less bright.

Stocks continued to retreat from their recent record highs on Tuesday, weighed down by an ongoing plunge in the price of oil. Bonds rallied as investors bought the safest assets, pushing the yield on the benchmark 10-year Treasury note back below 2 percent for the first time in three months.

The moves suggest that investors have little confidence the U.S. economy will continue to grow at the 5 percent annual pace reached in the third quarter of last year. As a consequence, company earnings will suffer. The reason for the gloomy prognosis is a slowdown in growth elsewhere in world, particularly Europe.

The slump in the price of oil, which dropped well below $50 a barrel Tuesday from $107 in June, has also prompted a sharp shift in the mood of investors.

"Oil prices falling is a good thing for the economy overall," said Randy Frederick, managing director of trading and derivatives with the Schwab Center for Financial Research. "But there is a point when they fall far enough that it could potentially be a problem."

While drivers filling up at gas stations are welcoming lower oil prices, investors are getting worried about the consequences of the slump, which has pushed the oil down by more than half in six months. On Tuesday, the price of oil fell $2.11 to $47.93, its lowest level since April 2009.

If prices stay low, some companies in the energy industry will go out of business because the cost of extracting oil will exceed its price. Not only will that cost jobs, it will lead to lower spending on plants and equipment.

On Tuesday, U.S. Steel said it will temporarily lay off about 750 employees from two plants that make tubular steel used in oil and gas drilling. The Pittsburgh-based company said it is making the moves in response to lower oil prices and competition from foreign companies.

Investors also got some discouraging news on the economy.

Orders to U.S. factories fell for a fourth straight month in November, stoking investors' concerns about growth. Factory orders dropped 0.7 percent in November after falling by the same amount in October, the Commerce Department said Tuesday. The weakness was due to lower demand for primary metals, industrial machinery and military aircraft.

The Institute for Supply Management said Tuesday that its services index fell to 56.2 last month, down from 59.3 in November.

For some, the drop in bond yields is worrying because it signals a move toward falling prices, or deflation.

Lower prices may seem attractive, but they can damage a country's growth. Consumers and businesses can start cutting back spending as they wait for prices to drop further.

Oil prices "are adding to the fear of deflation spreading to the global economy," said Peter Cardillio, chief market economist at Rockwell Global Capital. "That's what the real fear is all about."

Bond prices, meanwhile, are rallying in part because U.S. yields, even at their low levels, are attractive to overseas investors.

The yield on the 10-year Treasury note, which falls when prices rise, dropped to 1.96 percent from 2.03 percent on Monday.

Bonds yields in Europe have plummeted as growth in that region wavers and investors start to worry about Greece. The government there might try to renegotiate the terms of its bailout and exit the euro bloc if an anti-austerity party wins national elections this month.

In the U.S., financial stocks fell the most among the 10 industry sectors in the S&P 500 index. Weaker growth would mean less demand for loans, and lower interest rates mean that the profits banks make on loans will be lower.

Among individual stocks, Michael Kors was the biggest loser in the S&P 500.

The stock slumped $6.13, or 8.4 percent, to $66.87 after analysts at Credit Suisse cut their price target on the company's stock to $79 from $103. The move followed what they described as a "dramatic" increase in promotional activity at the luxury retailer, suggesting that it is struggling to maintain growth rates.

AOL was one of the stocks to buck the downward trend. The stock climbed $1.51, or 3.4 percent, to $46.25 after Bloomberg reported that Verizon had approached the company about a potential acquisition or joint venture to expand its mobile video offerings. Verizon gained 47 cents, or 1 percent, to $47.04.

In the energy market, Brent crude, a benchmark for international oils used by many U.S. refineries, fell $2.01 to close at $51.10 in London.

In other futures trading on the NYMEX: