American traders aren't likely to take kindly to the suggestion that big government might be good for the stock market. But data from a paper on the job- and income-growth of top earners shows that stock prices in some socialized countries, relative to themselves and adjusted for inflation, have done considerably better than those in the U.S over the last two and a half decades.

Specifically, during the twenty five years after Ronald Reagan took office -- a pro-market honeymoon that Ryan Chittum of the Columbia Journalism Review this week termed "the ascent of laissez-faire economic policies" -- French stock prices have performed significantly better than Americans ones, according to the report by Jon Bakija, Adam Cole, and Bradley Heim.

A further examination of the 39-year period extending from the end of the Nixon administration until 2008 shows the Swedish economy, known for its high taxes and heavy regulation, growing at a significantly higher rate than the US.

The authors conclude that big government might not actually stand in contradiction to a productive economy: "Countries with typically high levels of government involvement in the economy, such as Sweden, Denmark and Canada, do not appear to have experienced stifled economic growth relative to countries where government involvement is more limited, like the US," the report says.

With bastions of socialism -- Sweden Canada and France -- outpacing American market prices, does this mean it's time for Wall Streeters to start calling croissants "Freedom bagels?" Probably not.

According to Jacob Funk Kirkegaard, a research fellow specializing in European economies at the Peterson Institute for International Economics, the disparity between the American and European markets might have more to do with the period in question than governmental forces.

"In 1981, [Francois] Mitterand was elected president of France, and the first thing he did was to nationalize a bunch of French businesses and most of the banking system," Kirkegaard explained. "But going forward, France has moved quite dramatically towards a market-oriented economy, though not anywhere near the scope of market and economic freedom as perceived in the U.S."

If Swedish and French markets have shown considerable strength compared to American ones, Kirkegaard posited that "these countries benefited from a more rapid shift to a market economy than in the U.S. over this period. The starting point was much more hostile. That’s what you see in the growth."

That said, Kirkegaard also dismissed the traditional American capitalist contention that socialism is bad for market growth: "A lot of the finger-pointing we do at these countries is totally misleading. It's a myth."

Kirkegaard says that many socialized governments provide critical support for business growth, including first class infrastructure built by the public sector, retraining of workers and public education systems that result in better-prepared workforces, comparative to the US. "There are a lot of areas where the role of government is a benefit for the businesses in these countries."

"The idea that they are socialists and condemned to living in these bread bin-style housing complexes is illusional," he said. "It's ideological slander."

Compare the stocks of Japan, France, and U.S., or get the report here: 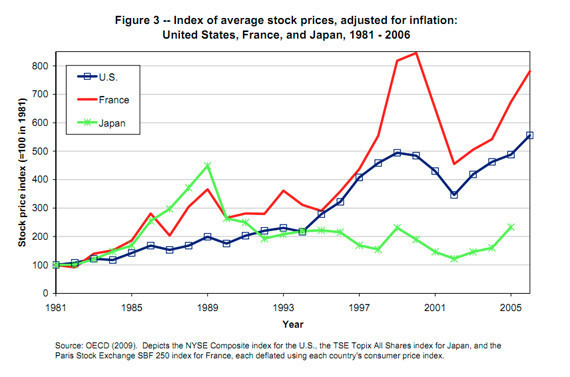