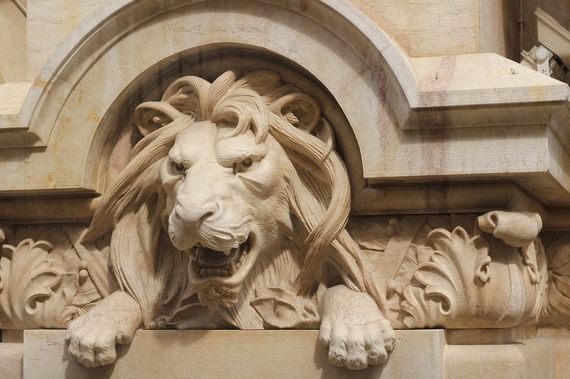 Some of the greatest leaders in history were Stoics -- Cicero, Epictetus, Seneca, Marcus Aurelius. It's no surprise considering Stoicism's emphasis on self-mastery. Success and leadership has to start with looking in the mirror.

The key is found in responding -- not reacting to external circumstances. Stoics taught although we can't control what happens to us in life, we can control our perception of it, which makes all the difference.

Responding requires being mindful, aware, and in control of your emotions and thought process, rather than being under their control. In any event, we can choose to perceive them in a productive way, or a destructive way. Stoics chose to see the glass always half-full, to find the silver lining in every cloud.

These seven lessons from Stoicism will no doubt bring positive change to your life:

"If you are distressed by anything external, the pain is not due to the thing itself, but to your estimate of it; and this you have the power to revoke at any moment." -- Marcus Aurelius.

Only an attentive mind can filter and revoke unhealthy thoughts, and subsequently, unhealthy behaviors. Stoicism taught a clear distinction between your thoughts and behavior. It's that old adage, think before you act. The mindless person acts viscerally and regretfully.

The next time you're confronted with a frustrating conversation or your schedule is suddenly derailed, pause for a moment -- create that break to process what happened; then ask yourself: What's the best way I can respond?

The simple act creates the self-reflection necessary put an end to impulsive, and negative responses.

"Begin at once to live, and count each separate day as a separate life." -- Seneca.

An awful day doesn't have to become an awful week. Failing to meet a deadline can spread to a rejected business proposal if the fire of frustration isn't put out. The Stoics built walls of mental compartmentalization when necessary. Little pieces of the big picture connect and affect one another; when a cancer of anger and negativity is identified, it needs to be cut out before it spreads.

A new day, a clean slate. Put a stop to the domino effect before your little errors turn into a major crises.

"If a person doesn't know to which port they sail, no wind is favorable." -- Seneca.

The Stoic wakes up and knows exactly what they want out of their day. They have a clear destination and clear goals. Starting your day with writing down daily goals creates a psychological pre-commitment and expectation that increases the likelihood of these goals being achieved.

Dr. Gail Matthews is a psychologist from Dominican University, her research took 267 participants and found that those who wrote down their goals with specific weekly strategies had a 76 percent success rate compared with 43 percent who merely stated their goals.

Every action must connect with a destination. Otherwise, you can sail all day, and end up right where you started.

"No great thing is created suddenly, any more than a bunch of grapes or a fig. If you tell me that you desire a fig, I answer you that there must be time. Let it first blossom, then bear fruit, then ripen." -- Epictetus.

Ambitious people live ten years in the future; patience isn't our greatest virtue. Stoicism stressed living in accordance to our inner flow, and also to the external flow of life. Patience is not the enemy of productivity.

Constantly trying to find shortcuts will send you round in circles. Quality often gets sacrificed on the altar of rapid development and excitement can cause ignorance toward necessary procedures.

Giving something an extra day can make a great deal of difference.

"True happiness is to enjoy the present, without anxious dependence upon the future, not to amuse ourselves with either hopes or fears but to rest satisfied with what we have, which is sufficient. The greatest blessings of mankind are within us and within our reach. A wise man is content with his lot, whatever it may be, without wishing for what he has not." -- Seneca

We all believe achievement and success brings happiness. But surprisingly, it's an equation that can be flipped -- happiness brings success and achievement. What the Stoics knew for centuries, modern science has recently clued into.

Harvard Psychologist Shawn Achor shared his research during a Ted Talk -- professionals from various careers who took part in a gratitude practice at the start of their day performed at a much better level than those who didn't. Achor showed that starting with a positive mindset releases dopamine, which increases overall performance and happiness levels.

Increase your performance with positivity at the starting blocks rather than at the finish line.

It's so important to have mentors and role models. But emulation can easily turn into imitation, and all you produce is a second-rate product. Stoicism emphasized a harmony between acceptance and change; the perfect balance between fate and free will. It's the wisdom to know when the leopard can't change it's spots, and when you can always teach an old dog new tricks.

Practically, it means embracing your unchangeable quirks and leveraging your uniqueness. There will never be another Elvis; the iconic VW Beetle can't be replaced. Figure out what your gifts and talents are, and exploit them. We often look to external sources for inspiration when the answer is within.

"Rehearse death. To say this is to tell a person to rehearse his freedom. A person who has learned how to die has unlearned how to be a slave." -- Seneca.

Not something we like to talk about, but the one certainty in life, is death. Confronting that reality is liberating. Whether we realize it or not, death anxiety is at the root of all our fears. Our fight/flight mechanism works to preserve life, to flee from death. But it often gets triggered long before death enters into the picture -- crippling us from stepping outside our comfort zone and pursuing passions and new creations.

Confronting and coming to peace with death diminishes that slavery to fear. Stoics stared death in the face and accepted it as a natural part of life; becoming friends with the "monster" defeats it.

Steve Jobs said it beautifully, "Remembering that you are going to die is the best way I know to avoid the trap of thinking you have something to lose. You are already naked. There is no reason not to follow your heart."