Now a pumpkin thief's been carved up, rhetorically speaking. 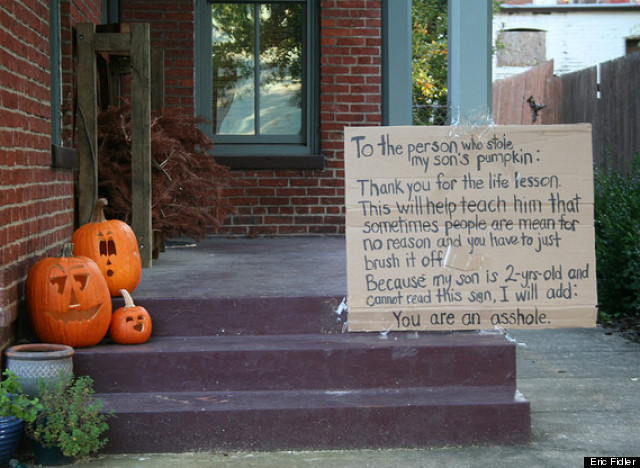 Eric Fidler spotted this amazing sign in D.C.'s LeDroit Park neighborhood on Sunday afternoon, and posted a photo of it to his blog.

In case you can't make out what the sign says, Fidler transcribed it thusly, with the not-so child-friendly language redacted:

To the person who stole my son’s pumpkin:

Thank you for the life lesson. This will teach him that sometimes people are mean for no reason and you have to just brush it off.

Because my son is 2-yrs-old and cannot read this sign, I will add:

And to the parent who hung this sign: You are a hero.

Update, Oct. 29, 10:41 a.m.: The hero parent behind the sign is Becky Reina, who described her inspiration to WJLA:

LeDroit Park resident Becky Reina says her family carved four pumpkins a little over a week ago -- one to represent her, one for her husband, and one each for her two-year -old son Tommy and infant Abby.

"On Thursday we came out and there were only three pumpkins," Becky said.

Someone had stolen Tommy's pumpkin.

"Pumpkins get smashed, pumpkins get stolen, of course," Becky said. "I was really just mad because it was only his pumpkin [they stole]."

Reina told the station she hopes the thief or thieves will "see the sign, and I hope they feel bad about it." It seems her hopes that the pumpkin will be returned are more tempered, since she suspects Tommy's pumpkin is among those that neighbors found smashed on the street.