ROME -- Amid the grey cobblestones that line the narrow streets of this ancient city are some that seem to demand the attention of a passer-by. They appear to be made of gold and glint in the light of the sun by day and the street lamps by night. Their placement in the city seems random as well: there are a lot of them in the Jewish Ghetto, but they can be seen also in Trastavere and several other neighborhoods in Rome.

A closer look reveals that these cobblestones are, in fact, brass plated and each one has a small history lesson engraved on it. Here is one that sits amid the stones in Via della Reginella in the Ghetto:

After reading this stone, the passer-by might wonder: Why was the 2-year-old Rossanna Calo arrested, deported and worst of all, killed? Who was Rossanna Calo? Couldn't someone have stopped this atrocity from happening?

The stones are part of an art installation called stolpersteine, meaning "stumbling stones" in German, and they are intended to evoke questions. They are permanent memorials for the victims of the Holocaust during the Second World War, and more than 32,000 of these stones have been installed in over 700 locations in Europe by the German artist Gunter Demnig.

View photos of the stolpersteine and continue reading below...

The Holocaust in Europe killed approximately 6 million Jews, of which more than one million were children like Rossana Calo. Under a carefully planned act of genocide called the "Final Solution to the Jewish Question," the Nazi regime arrested Jews from all over Europe and sent them to extermination camps like Auschwitz in Poland, where they would either be systematically killed, or die due to the camp's horrific living conditions.

The stolpersteine project honors not just the memory of the Jews, but also the other groups of people who were targeted by the Nazis, which included the Romani and Sinti gypsy tribes, homosexuals, and political and religious opponents to the regime. By placing these stones in front of the last known residence of the victim, Demnig hopes to immortalize each of the estimated 11 million lives lost in the Holocaust.

Requests for stolpersteine can be made by families of the victims through Demnig's website for a fee of 120 euros, and while the stones are always installed by him, the logistics are managed by various teams around Europe. In Italy, the stolpersteine project is led by Adachiara Zevi, an art historian and architect working with the Union of Jewish Communities in Rome.

Zevi doesn't contain her excitement when talking about her admiration for the artist. She says that Demnig has dedicated his life to a project that he must know he can never finish. The task of creating a stone for each of the 11 million victims is simply not realistic. But even though he's just scratched the surface, the work he's done so far are a highly effective means to make sure that the Holocaust is never forgotten.

"You stumble upon the stolpersteine every day," she says. "Each day you overlap the past with the present." Zevi also draws attention to the unassuming, discreet characteristic of the stolpersteine. "It is not a monument that is added to the city. Instead it becomes, really, a part of the city," she says. "This is a monument in progress. It is going to become a map of memory, all over Europe."

But not everyone has responded positively to the stolpersteine project. The stones have been subjected to several instances of vandalism; the most recent of which was in January of this year when three stolpersteine plaques were stolen barely a week after they were installed in the Santa Maria di Monticelli neighborhood of Rome.

Such incidents have made some people wary of putting up stolpersteine for their loved ones. Luciana Terracina's brother, Amedeo Di Cori, was 16 when he was arrested and taken to Auschwitz by the Nazi regime. She never saw her brother again. Although her daughter, Sara, wants to put up stolpersteine in memory of the uncle she never met, Terracina is firmly against the idea.

"By placing [the stolpersteine] outside, they will not be protected. People don't care. People could take it and break it," Terracina says. Her fears are also echoed by those who already have stones installed on the streets of Rome. Sira Fatucci, who works with Zevi on the stolpersteine project, confesses that she has mixed feelings about the five stones she had commissioned for members of her father's family.

"When I see them, I feel a sense of peace," she says. "But, all the time, I am also afraid that someone can take them, or vandalize them, or write something on them. That makes me kind of uncomfortable."

Fatucci's father, Amadio Fatucci, was hiding under a table when the Nazis took away his parents, grandparents and 8-year-old brother from their home on the morning of Oct. 16, 1943. Her father talked to her about the incident only once because, Fatucci says, it was too painful a memory for him to talk about. "In a strange way, I think he felt guilty for being the only one in the family who got saved," she remembers.

But both Fatucci and Zeviagree that the stolpersteine, besides being a memorial for others to see and appreciate, also make the victims of the Holocaust become more real and human. "Six million Jews is just a number, and it can be too abstract to comprehend," says Zevi. But naming each of the lives lost makes a bigger impact than just the number.

"When you got into a concentration camp, you stopped being a human being," Zevi explains. "You lost your name, you became a number. And then when you were killed, you were buried in a common, mass grave. The moment you were taken out of your house, you became nothing."

But with the stolpersteine, each victim becomes a person again, with a name, a year of birth, a place where he or she will be remembered forever. Zevi remembers a friend who, after seeing the stolpersteine laid for her family, said that she felt that she had "brought her family back home."

"The location of the stolpersteine marks the threshold between the before and the after -- between a normal life and an abyss," Zevi says. "I think that's very important."

Fatucci smiles when asked if talking about the Holocaust every day could be thought of as excessive. "No," she replies. "Speaking too much about the Holocaust is better than nothing at all." Fatucci says that the stolpersteine is an effective weapon against the problem of historical revisionism as posed by the deniers of the Holocaust, since each stone validates a life that was cut short by the Nazis.

The ultimate aim of the stolpersteine remains, however, to make sure that people never forget the past.

"The Holocaust was made possible because people looked the other way when the atrocities happened. With the stolpersteine, you can't do that, you can't look away," Zevi says. "You see them every day, and you have to remember the Holocaust, so that it never happens again." 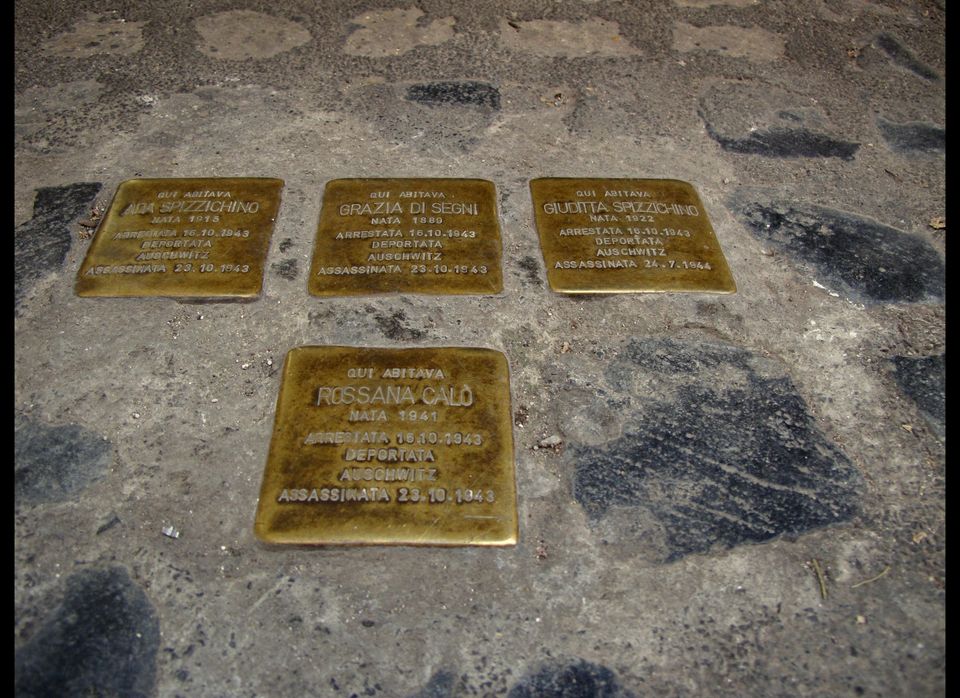 1 / 6
An example of stolpersteine on the streets of Rome.
Aby Sam Thomas