Archaeologists have unearthed an incredibly rare flint axe from the Stone Age that just may have been used in an ancient ritual.

The 5,500-year-old discovery -- found jammed into the Earth with its wooden handle still attached -- was part of an ongoing excavation on the island of Lolland in Denmark.

"When we suddenly realized that we had actually found most of a complete hafted [with its handle still attached] axe, stuck 30 centimeters down into the seabed, we knew that this was a very special find," Søren Anker Sørensen, an archaeologist at the Museum Lolland-Falster involved in the excavation, said in a written statement. 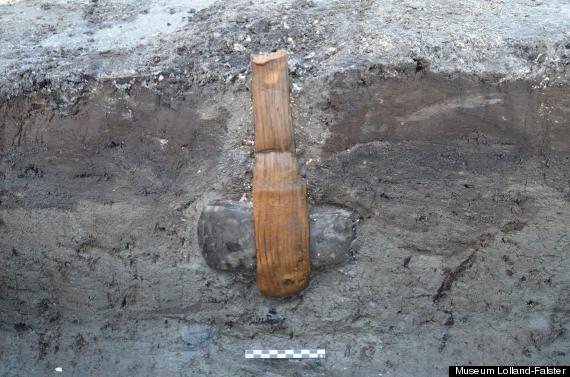 A paddle, two bows, and 14 axe shafts were found nearby, all of which were standing upright. The researchers believe these artifacts were lodged into the ground deliberately, perhaps as sacrificial offerings.

The museum hopes to uncover more artifacts that may hold clues to such ancient rituals by continuing its excavation for another year or so, until construction begins on a new underwater tunnel that will link Lolland to the German island of Fehmarn.

Earlier this month, a set of ancient human footprints were found as part of the ongoing excavation.