Our early ancestors may have been cleverer than we once thought.

An international team of researchers said last week they had found evidence that sophisticated weapons once thought to be unique to early humans were in use tens of thousands of years before Homo sapiens first walked the planet.

In their new paper, published Nov. 13 in PLoS ONE, the researchers explained that after careful analysis of sharpened obsidian fragments discovered at an Ethiopian Stone Age site known as Gademotta, it's been determined that the pieces, believed to be about 280,000 years old, were parts of stone-tipped javelins.

Researchers looked closely at tiny markings and fractures on the artifacts to determine how they were used, and they believe the items to be the oldest stone-tipped projectiles ever found.

The spears are "so ancient that they actually predate the earliest known fossils for our species by 85,000 years," Discovery News reported. 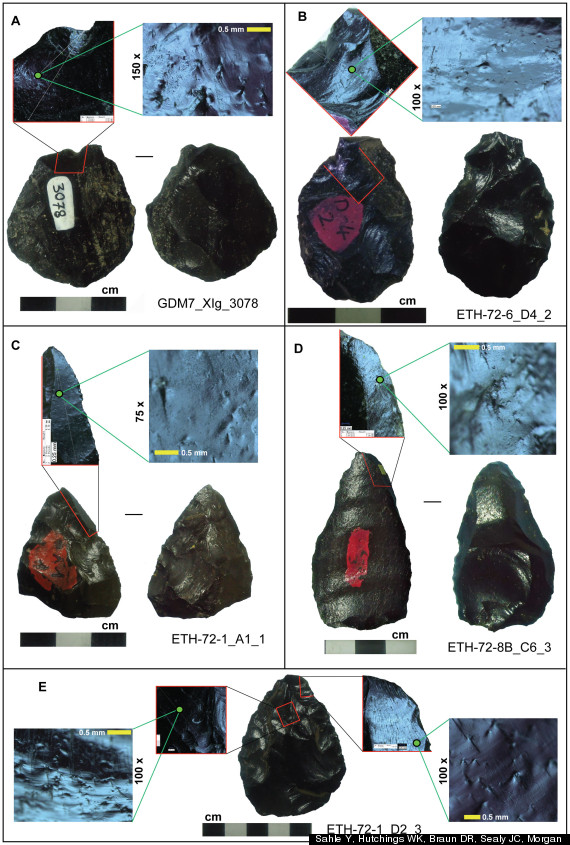 The invention of projectile weapons was long believed to be one of the major markers of complex and advanced behavior that set Homo sapiens apart from earlier hominids. So who exactly was throwing these stone-tipped spears before early humans showed up?

Dr. Yonatan Sahle, a postdoctoral researcher at the University of California at Berkeley’s Human Evolution Research Center and co-author of the study, told The Huffington Post that the javelins may have been the handiwork of Homo heidelbergensis, aka Heidelberg Man -- a human ancestor who, until recently, wasn't typically thought of as being all that bright.

The cranium of homo heidelbergensis, found in Atapuerca (Spain).

In recent years, however, Heidelberg Man's reputation has been evolving.

In 2012, a different group of researchers also found evidence of the Heidelberg Man's weapon-making skills. That team discovered that Homo heidelbergensis may have been fashioning stone-tipped thrusting spears (not the throwing kind) 500,000 years ago -- some 250,000 years earlier than previously thought.

The thrusting spears finding was especially stunning because previously there had been no evidence to suggest that Homo heidelbergensis knew how to create such complex weapons, National Geographic reported. John Shea, a paleontologist who was not a part of that study, told the magazine that finding the spears at a Homo heidelbergensis site was akin to stumbling upon "an iPod in a Roman Empire site."

But if the thrusting spears seemed surprising, the discovery of stone-tipped projectile weapons used in the era of the Heidelberg Man came as even more of a shocker.

Classifying projectile weapons as a "decisive advance over the thrusting spear," the new report by Sahle and his team maintains that "the ability to wound or kill dangerous animals or enemies at a distance is considered one of the most significant adaptive advantages for Paleolithic hunters, reducing the likelihood of injury and increasing prey breadth."

Evidence that the Heidelberg Man may have been using stone-tipped spears shows that at least some of our ancestors were "as clever as [their later Homo sapien] descendants," Sahle said.

"It's a very exciting find," he added.

More research is needed to determine how the new finding will shape our understanding of hominid evolution, but Sahle said that at least one thing's for certain: We can no longer boast with the same level of confidence that humans are the masterminds behind all advanced technology.

"As evidence accumulates, we're finding out our ancestors at different points in time were not as primitive as we thought they were," he told the HuffPost. "It's a humbling discovery."

Stone-Tipped Spears Were In Use 85,000 Years Before Modern Humans Appeared, Scientists Say
Meet Your Cave-Parents