The Drug and Alcohol Crash Risk report, produced by the Department of Transportation's National Highway Traffic Safety Administration, found that while drunken driving dramatically increased the risk of getting into an accident, there was no evidence that using marijuana heightened that risk. In fact, after adjusting for age, gender, race and alcohol use, the report found that stoned drivers were no more likely to crash than drivers who were not intoxicated at all.

However, the federal researchers say that their report's findings "do not indicate that drug use by drivers is risk-free," adding that "the study limitations... together with the findings of numerous other studies using different and complementary methods, need to be carefully considered before more definitive conclusions about drug use and crash risk can be reached." 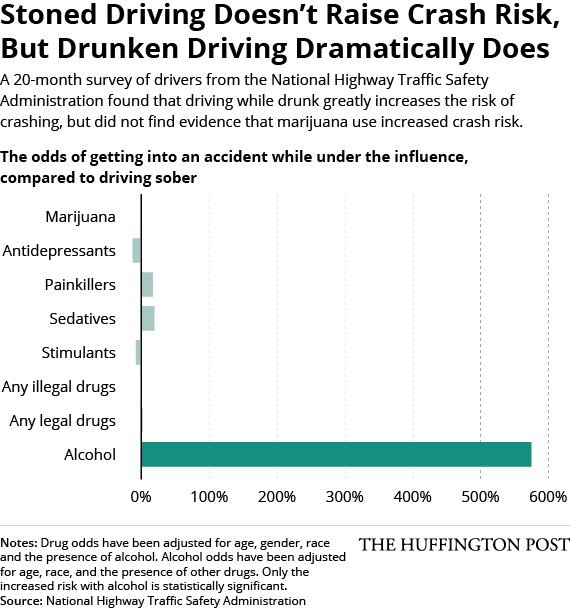 The data show just how dangerous it is to drive while drunk: The risk of crashing while driving with a blood-alcohol concentration of .05 or above is about seven times higher than the risk of crashing while sober. The likelihood of getting into an accident while using some other substances -- including marijuana, antidepressants, painkillers, sedatives and stimulants -- is statistically not significantly higher than driving while sober, after adjusting for various demographic factors.

The survey found that marijuana is the second most frequently detected drug, after alcohol, in drivers involved in accidents, as well as in the general driving population. Overall, the researchers found that drivers who tested positive for THC were 25 percent more likely to get in an accident. But after accounting for other characteristics that can be associated with an increase in crash risk -- factors like age, gender and race -- the study found that the risk of a crash nearly vanished in drivers who had used marijuana.

"This analysis shows that the significant increased risk of crash involvement associated with THC and illegal drugs... is not found after adjusting for these demographic variables," the report reads. "This finding suggests that these demographic variables may have co-varied with drug use and accounted for most of the increased crash risk. For example, if the THC-positive drivers were predominantly young males, their apparent crash risk may have been related to age and gender rather than use of THC."

For the study, NHTSA research teams responded to crashes 24 hours a day, seven days a week, over a 20-month period during 2013 and 2014. Researchers also gathered data on thousands of other drivers not involved in crashes. When recording information on drivers who had used marijuana, researchers only included those who specifically tested positive for THC, the main psychoactive cannabinoid in the plant associated with the "high" sensation. Drivers who tested positive for any of the inactive cannabinoids in marijuana were not considered "positive."

NHTSA says in the report that the legalization of recreational marijuana in Colorado, Washington, Oregon and Alaska has increased concern over the potential risks of driving while impaired by marijuana.

In Colorado and Washington, lawmakers have enacted impairment standards for marijuana, similar to those that exist for alcohol. In both states, a driver is presumed to be too impaired to drive if his or her THC-blood level is higher than five nanograms of active THC per millimeter of blood.

However, last week's report highlights how difficult it is to use traditional methods to determine how substances other than alcohol impair drivers. Unlike blood-alcohol level, which is directly correlated with one's inability to drive, THC-blood levels don't necessarily indicate a clear level of impairment.

"Most psychoactive drugs are chemically complex molecules, whose absorption, action, and elimination from the body are difficult to predict, and considerable differences exist between individuals with regard to the rates with which these processes occur," NHTSA writes. "Alcohol, in comparison, is more predictable."

The trouble arises in the way the body processes marijuana -- a person who has consumed the substance can potentially test positive for THC days after using. In a 2009 study published in the journal Addiction, six of 25 participants who had consumed marijuana still tested positive for active levels of THC seven days later -- long after they had stopped feeling the effects of the cannabis.

"Nobody should drive while impaired by any substance, and that’s why there are laws on the books to address it," Mason Tvert, communications director for Marijuana Policy Project, a drug policy reform group, told The Huffington Post in response to the study's findings. "While the research is pretty clear that marijuana use is not remotely as problematic as alcohol, it can cause impairment for some people when used at certain levels. It’s worth noting that there is also research that has shown people who have used marijuana are more likely to recognize if they are impaired than those who have used alcohol."

It's not the first time that THC content in a person's blood stream has been shown to be a rather unreliable indicator of impairment.

In 2011, a marijuana reporter in Denver memorably demonstrated THC's unpredictable effect on the body. After a night of sleep and 15 hours without smoking pot, the reporter's THC-blood level was nearly three times higher than the proposed legal limit.

Then in 2013, a Washington state television station assembled a group of volunteers, had them smoke pot and set them loose on a driving test course to try to answer the question: How high is too high to drive?

Unfortunately, the less-than-scientific results, while entertaining, didn't yield much clarity. One regular smoker of marijuana tested above the legal limit, yet drove without much of a problem. Two casual smokers also navigated the course without incident. However, after smoking more marijuana, some of the participants quickly grew less adept behind the wheel.

Although the federal government's marijuana ban has stifled some research on the drug, the most comprehensive federal study on how marijuana and alcohol impact drivers is currently ongoing and is expected to add some more clarity to the issue.

Stoned Drivers At Far Lower Risk Of Crash Than Drunken Drivers
27 Reasons Why The U.S. Shouldn't Lead The War On Drugs