A site near Stonehenge has revealed archaeological evidence that hunters lived just a mile from Stonehenge roughly 5,000 years prior to the construction of the first stones, new research suggests.

What's more, the site, which was occupied continuously for 3,000 years, had evidence of burning, thousands of flint tool fragments and bones of wild aurochs, a type of extinct giant cow. That suggests the area near Stonehenge may have been an auroch migration route that became an ancient feasting site, drawing people together from across different cultures in the region, wrote lead researcher David Jacques of the Open University in the United Kingdeom, in an email.

"We may have found the cradle of Stonehenge, the reason why it is where it is," Jacques wrote. [In Photos: A Walk Through Stonehenge]

The new discovery may also identify the people who first erected structures at Stonehenge. A few gigantic pine posts, possibly totem poles, were raised at Stonehenge between 8,500 and 10,000 years ago, but until now there was scant evidence of occupation in the area that long ago. The new research suggests those ancient structures may perhaps have been raised to honor a sacred hunting ground. 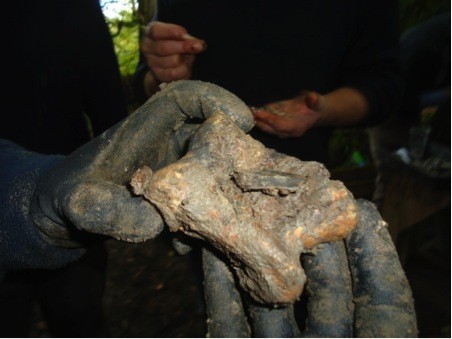 Researchers have uncovered animal bones, flint tools, and evidence of burning that predates the first stones at Stonehenge by nearly 5,000 years. Here, an animal bone, with a point still in it

For decades, people have wondered at the enigmatic stone structures erected roughly 5,000 years ago in the plains of Wiltshire, England. No one knows why ancient people built the structure: some believe it was a place of ancient worship or a sun calendar, whereas still others think it was a symbol of unity or even that Stonehenge was inspired by a sound illusion.

The large megaliths, known as sarsens, are up to 30 feet tall and weigh up to 25 tons, while the smaller bluestones weigh up to 4 tons. Researchers think the giant boulders came from a quarry near Marlborough Downs, just 20 miles (32 kilometers) from the iconic site, while the bluestones likely came from Preseli Hills in Wales, nearly 156 miles (250 km) away from Stonehenge.

Jacques was looking through archival photographs of the region surrounding Stonehenge when he spotted a site known as Vespasian's Camp, just a mile from Stonehenge in nearby Amesbury.

Realizing that it hadn't been fully surveyed, Jacques began to investigate the area, which harbored a freshwater spring.

Because animals like to stop and drink at such watering holes, Jacques wondered whether ancient man may have settled nearby as well.

The team uncovered roughly 350 animal bones and 12,500 flint tools or fragments, as well as lots of evidence of burning. Carbon dating suggested the area was occupied by humans from 7500 B.C. to 4700 B.C. — roughly 5,000 years prior to the erection of the first stones at Stonehenge. [See Photos of the Stonehenge Hunting Ground ]

"The spring may have originally attracted large animals to it, which would have aided hunting and may have led to associations that the area was a sacred hunting ground," Jacques wrote.

In addition, the researchers found tools made from stone from one region of England, but fashioned in the style of another region (for instance, a stone tool made from Welsh or Cornwall slate, but made in a style typical of Sussex). That suggests the people from different regions were coming together at the site, Jacques wrote.

The findings could help researchers pinpoint why the ancient builders of Stonehenge chose the place they did, Jacques said.

"We have found a bridge from which transmission of cultural memory about the 'specialness' of the place where the stones were later being put up was possible," Jacques wrote. "We are getting closer to understanding their reasons for putting it up — it is all to do with ancestors, but those ancestors go much further back than has previously been realised."

The findings show "there was a substantial interest in the Stonehenge landscape well before the stones were hauled there and erected," said Timothy Darvill, an archaeologist at Bournemouth University in the U.K., who was not involved in the study.

Excavations dating to 2008 at Stonehenge also confirm earlier use at the megalithic site, Darvill wrote. However, what makes the Amesbury discovery special is the large trove of auroch bones found in the area, which suggests the spring was on a natural migration route for the wild aurochs, he said.

A program about the Amesbury site will air on BBC 4 on April 29.