Research at Stonehenge is going in circles--literally. And that's a good thing.

A prolonged drought has revealed that the mysterious monument's ancient stones, which currently arc in a semicircle, likely once formed a complete circle. The source of this discovery? A garden hose, used for watering the grounds, that was too short to reach the monument's far side.

While the grounds around Stonehenge are typically lush and green, the monument experienced an unusually dry summer in 2013. As a result, a groundskeeper noticed odd patterns emerging in the scorched grass that seemed to indicate places where stones would be, if the monument were a full circle. 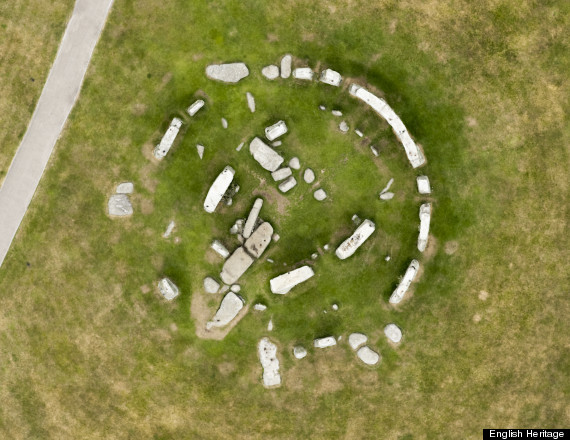 An aerial image of the parched grass at Stonehenge, provided to The Huffington Post by English Heritage, indicates the likely position of missing stones. Placeholders for the vanished stones are indicated by yellowed grass in the lower left of the stone arrangement.

"I was standing on the public path looking at the grass near the stones and thinking that we needed to find a longer hosepipe to get the parched patches to green up," Tim Daw, the groundskeeper, told the BBC. "A sudden lightbulb moment in my head, and I remembered that the marks were where archaeologists had looked without success for signs that there had been stone holes, and that parch marks can signify them ... Not being archaeologists we called in the professionals to evaluate them."

The professionals had a look and confirmed Daw's suspicions. Susan Greaney, an archaeologist with English Heritage, the group that manages Stonehenge, called the discovery "really significant."

"We maintain the grass with watering when it's very dry in the summer, but our hosepipe doesn't reach to the other side of the stone circle. If we'd had a longer hosepipe we might not have been able to see them," Greaney told The Telegraph, referring to the newly discovered scorch marks. "A lot of people assume we've excavated the entire site and everything we're ever going to know about the monument is known ... but actually there's quite a lot we still don't know and there's quite a lot that can be discovered just through non-excavation methods."

Thanks to Daw's keen eye and an inadequate garden hose, we now know Stonehenge may not have been left deliberately incomplete. As for the groundskeeping, a spokesperson for English Heritage told The Guardian that it might now skimp on watering other portions of the site, in the hopes of learning more.

A paper describing the discovery was published in the journal Antiquity.