Theories about the purpose of Stonehenge range from a secular calendar to a place of spiritual worship. Now, an archaeologist suggests that the Stonehenge monument in southern England may have been an attempt to mimic a sound-based illusion.

If two pipers were to play in a field, observers walking around the musicians would hear a strange effect, said Steven Waller, a doctoral researcher at Rock Art Acoustics USA, who specializes in the sound properties of ancient sites, or archaeoacoustics. At certain points, the sound waves produced by each player would cancel each other out, creating spots where the sound is dampened.

It's this pattern of quiet spots that may have inspired Stonehenge, Waller told an audience Thursday (Feb. 16) in Vancouver, British Columbia, at the annual meeting of the American Association for the Advancement of Science.

The theory is highly speculative, but modern-day experiments do reveal that the layout of the Stonehenge ruins and other rock circles mimics the piper illusion, with stones instead of competing sound waves blocking out sounds made in the center of the circle.

In support of the theory, Waller pointed to myths linking Stonehenge with music, such as the traditional nickname for stone circles in Great Britain: "piper stones." One legend holds that Stonehenge was created when two magic pipers led maidens into the field to dance and then turned them to stone. [Album: 7 Wonders of the Ancient World]

Waller experimented by having blindfolded participants walk into a field as two pipers played. He asked the volunteers to tell him whenever they thought a barrier existed between them and the sound. There were no barriers in the field, but acoustic "dead spots" created by sound-wave interference certainly gave the volunteers the impression that there were.

"They drew structures, archways and openings that are very similar to Stonehenge," Waller said.

Waller believes the people who built Stonehenge more than 5,000 years ago may have heard this sound-canceling illusion during ceremonies with musicians and thought it mystical, spurring the creation of the stone circle.

Though the theory is unlikely to settle the mystery of Stonehenge, Waller said he hopes to highlight the importance of considering sound in archaeology. Rock art sites are often in areas where cave acoustics are particularly prone to echoes, he said, suggesting that ancient people found meaning in sound.

"Nobody has been paying attention to sound," Waller said. "We've been destroying sound. In some of the French [rock art] caves, they've widened the tunnels to build little train tracks to take the tourists back – thereby ruining the acoustics that could have been the whole motivation in the first place."

Keep clicking for 13 photos of modern-day druids celebrating the winter solstice at Stonehenge: 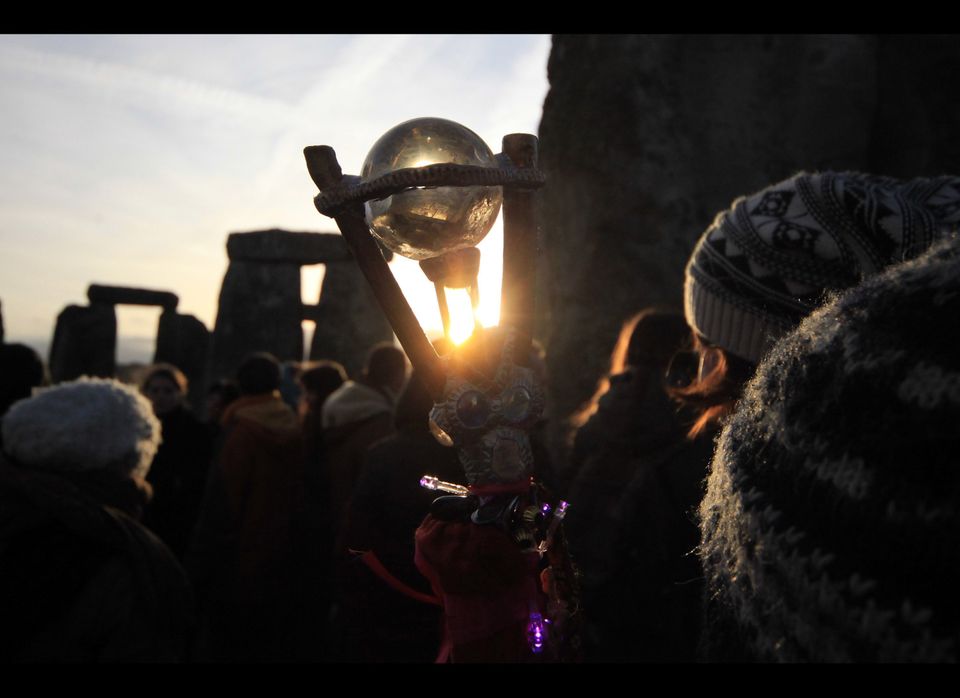 1 / 13
Druids Celebrate Winter Solstice At Stonehenge
WILTSHIRE, ENGLAND - DECEMBER 22: Druids, pagans and revellers take part in a winter solstice ceremony at Stonehenge on December 22, 2011 in Wiltshire, England. The unseasonable warm weather encouraged a larger than normal crowd to gather at the famous historic stone circle to celebrate the sunrise closest to the Winter Solstice, the shortest day of the year. (Photo by Matt Cardy/Getty Images)
Getty