Of all the stones the ancients could have chosen to use in building Stonehenge, why did they pick those famous bluestones?

A provocative new study suggests it's because of their special acoustic qualities. The study adds a surprising twist to previous research that revealed Stonehenge may have been used as a concert venue.

For the study, researchers at the Royal College of Art in London tapped on more than 1,000 rocks in the Carn Menyn area of the Preseli Hills in southwestern Wales, the region where the iconic monument's bluestones are believed to have come from. 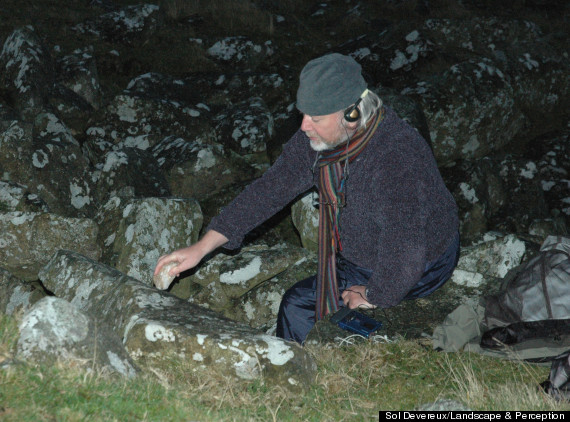 Researcher Paul Devereux uses percussion to test the sonic properties of a stone.

"We found it was a noteworthy soundscape, with a significant percentage of the actual rocks making metallic sounds like bells, gongs, tin drums, etc., when tapped with small, handheld 'hammerstones,'" study co-leader Paul Devereux, a research associate at the college and an expert in archaeo-acoustics, told The Huffington Post in an email.

Want to hear what the rocks sound like? Check out this video:

In July, the researchers gained clearance to conduct tests on the rocks at the Stonehenge site itself. They found the stones produced "distinctive if muted sounds, suggesting that they would have probably been full 'ringers' if they had the resonant space around them," Devereux and his collaborator wrote in an article describing the study.

Markings found on the Stonehenge rocks suggest that ancient people struck them -- but it's unclear whether the people were trying to make pretty sounds or simply breaking off bits of the rocks to keep as souvenirs, the researchers said.

"The stones may have been thought to have magical, qualities, mana, because of their exceptional sonic nature," Devereux told HuffPost Science, adding that even if the stones did not produce their own "rock music," they may have been revered for their sound qualities.

The study was published Dec. 2 in the journal Time and Mind: The Journal of Archaeology, Consciousness and Culture.