If the stones of Stonehenge could talk, they would tell the tale of the unity and peace that followed a long period of intense conflict between eastern and western Britain. At least, that’s what the research team behind the Stonehenge Riverside Project are saying after a decade-long archaeological investigation.

"When Stonehenge was built, there was a growing island-wide culture--the same styles of houses, pottery and other material forms were used from Orkney to the south coast. This was very different to the regionalism of previous centuries," Dr. Mike Parker Pearson, project leader and archaeology professor at the University of Sheffield, said in a written statement. "Stonehenge itself was a massive undertaking, requiring the labor of thousands to move stones from as far away as west Wales, shaping them and erecting them. Just the work itself, requiring everyone literally to pull together, would have been an act of unification.”

Is Pearson right? One thing's for sure: this isn't the first explanation for the strange circle of giant stones just north of Salisbury, England.

But the Stonehenge Riverside Project research team rejected these and other previous theories. As support for their "unification" theory, the researchers point to the social and economic climate in Britain between 3,000 B.C. and 2,500 B.C.--the period during which Stonehenge was erected. Plus, the monument is situated on a series of natural landforms, with the stones arranged so the land draws a line between the directions of the summer solstice sunrise and midwinter sunset. This alignment was meaningful to communities at that time, the researchers said.

"When we stumbled across this extraordinary natural arrangement of the sun’s path being marked in the land, we realized that prehistoric people selected this place to build Stonehenge because of its pre-ordained significance,” Pearson said in the statement. “Perhaps they saw this place as the center of the world."

Many people traveled to Stonehenge this month in celebration of the summer solstice.

"At Stonehenge itself, the principal axis appears to be in the opposite direction to midsummer sunrise, towards midsummer sunset, framed by the monument’s largest stone setting, the great trilithon," Pearson said.

This new research has been published in Pearson’s book "Stonehenge: Exploring the Greatest Stone Age Mystery."

Check out these photos from this year's summer solstice celebration at Stonehenge: 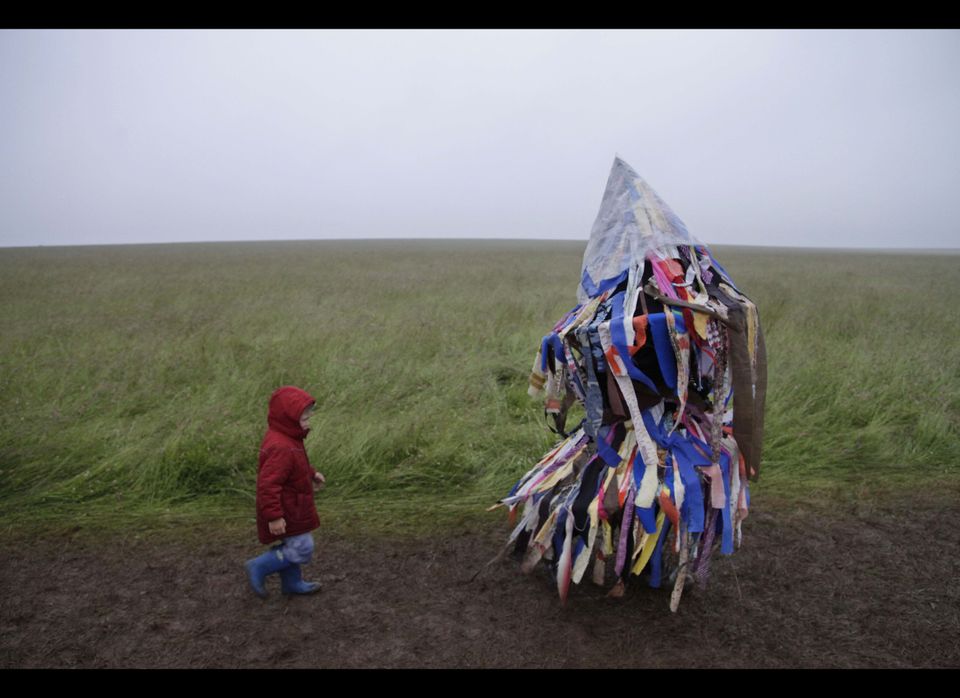 1 / 6
A man playing an accordion beneath a costume of torn fabrics and a child leave the Stonehenge monument in southern England. (AP Photo/Lefteris Pitarakis)
AP