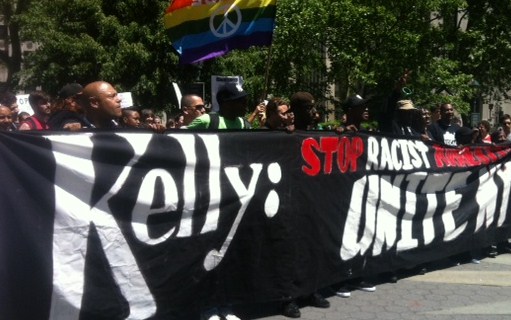 Nine white activists blocked the entrance of the NYPD headquarters at One Police Plaza, on Saturday, May 12, drawing attention to the city's ever-increasing, racially-skewed marijuana possession arrests. After plopping themselves down to block the entrance, with banners unfurled and 200 supporters chanting, "No Peace, No Justice," six, young, uniformed officers stood stony faced, unmoved, and made no arrests.

Before the act of civil disobedience, City Council Members Jumaane Williams, Melissa Mark-Viverito, and Letitia James spoke to the crowd about the harm and outrage caused by stop and frisks, marijuana possession arrests, and other police practices in their districts.

Speakers said the NYPD divides New York into a white city and a black and Latino city -- with much more aggressive policing for blacks and Latinos. City Council members and other speakers called for an end to racist police practices and demanded more accountability and community control over the NYPD.

In 2002 the NYPD made about 100,000 recorded stop and frisks. By 2011 that increased to nearly 700,000 recorded stops; 86 percent of those stopped and frisked are black and Latino. Police Commissioner Kelly argues that stop and frisks get guns off the streets and save lives in minority neighborhoods. However, police recover guns in only recover one gun every three thousand stops. That means the police find about one gun every three thousand stops. The NYCLU studies show that as the numbers of stops have increased the hit rates for guns have dropped. Others point out that buy-back programs retrieve far more weapons than the police stops.

Stops and searches more commonly result in police finding small bags of marijuana in pockets. Marijuana found during a search for weapons is not legally admissible in NY courts. Police sidestep this legal inconvenience by charging people with the more serious crime of marijuana "in plain view," even when the pot is deep in a pocket. A recent study by the Bronx Defenders found that as much as 40 percent of marijuana arrests in New York City are manufactured by the police in this manner.

Seven months ago the NYPD arrested Cornell West, the African-American professor from Princeton, for blocking the entrance to a New York police station to protest the city's stop and frisks. Inspired by Cornell West's action, white activists at the rally in front of police headquarters sat down and blocked the entrance to One Police Plaza, expecting to get arrested for their civil disobedience.

As the crowd began to understand that the police would not arrest these white demonstrators, sitting down in solidarity with black arrestees, some people started to yell, "What do white people have to do to get arrested in this city!"