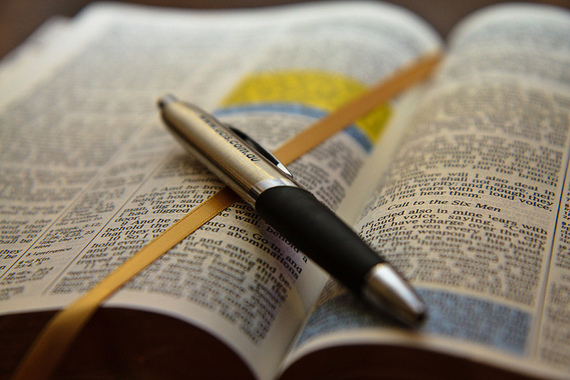 I'm going to keep this brief.

There's a troubling trend in liberal America: the desire to marginalize right-wing Christians by claiming they don't understand their own religion. While this is true in a number of respects, it doesn't change the fact that they're right about something: Paul condemns queer folks. And there isn't a shred of evidence that Jesus was a fan either, assuming he existed.

I'm all for dismissing opinions that are damaging and harmful. But we can't do so by being openly insincere and insecure in the process. Queer identity, as it's commonly understood (if it even is commonly understood today), wasn't a concept until very recent history. The entire Bible had been finished for over a millennium by the time the word "gay" came to exist.

What the Bible does do is prescribe behavior. Gay sex is not once directly described in a positive manner, and it's explicitly condemned in the Hebrew texts. When Christians tell you that their book calls you an "abomination," they're more right than wrong. Despite how infrequently it occurs, clobber passages are there.

Sure, David and Jonathan seemed to have had a little thing going on up in that field. And it's certainly true that writers of the Bible had varying positions on sexual norms. We can see that from the evolution between the way the earliest texts describe women to the way Jesus describes women.

But there's an incredibly good reason LGBT folks and their allies should agree with anti-gay Christians that the Bible condemns them: if we bother arguing that the Bible supports us, we're conceding its validity as a moral text. And once we free ourselves from its shackles, fundamentalists can just use it to abuse the next minority group unfortunate enough to stumble across their path.

The key point is that it absolutely does not matter what the Bible says about LGBTs or any other grouping of people. We don't even need to spend time denouncing the Bible's abhorrent stances on everything from slavery to rape, because it just isn't important. The Bible is an epic historical text that traces the way a large group of religious people understand their general genealogy and evolution of identity.

Taking a single ancient anthology as an evergreen moral blueprint is a problem that cannot be understated. Whether or not the source is good or evil isn't the issue. Ethical perspectives evolve over time and shouldn't be bound by the musings of ancient writers who had absolutely no imagining of our contemporary world.

This is a concept millions of moderate religious people completely understand and embrace. Unfortunately, there's still a large contingent of conservative Christians in the U.S. that are hanging on to a strictly prescriptive style of religion.

Feigning respect for someone else's sacred text as a moral guidebook doesn't just reinforce bad ideas, it's not even effective. Right-wing Christians already know that most liberals don't actually care what the Bible has to say about moral values, science or even literal history. When secular liberals attempt to argue with devout believers about the actual content of sacred texts by claiming they actually mean the inverse of what's on the page, it comes off as absurd. No one wins.

The next time someone tells you that the Bible condemns your entire existence, consider responding: "You're right. And I, along with millions of open and affirming people across this great country, do not care. You shouldn't either."

Perhaps the response will be unpleasant. But, in my experience, people prefer the dignity of honest interaction over the false nicety of condescending.