Many emails I receive start with, "I hate doing X, but..." and go on to explain that the sender wants to figure out how to force themselves to do something they don't like in order to achieve something else.

Here's the thing: stop doing shit you don't like.

Most of us, at some point in our lives, don't have a choice to stop doing things we don't like. Rent needs to be paid, food needs to be eaten -- and often -- it's more than just ourselves that depend on us. Do what it takes to get yourself out of those situations, to get a point where you do have a choice.

That choice is what I'm talking about here -- having a choice and picking the wrong one, just because someone else said it was right.

I hate public speaking and events. It's not that I'm afraid of it -- or rather -- it's not that fear is the most prevalent thing, it's just that I'd rather do other things. So I politely decline. Same with Facebook. I don't care if it helps build audiences, or that I could be part of private groups or anything else -- it's just not my jam. Never joined, never will. Regardless of income that could be made, fame that could had or some other success that could be achieved, I'm not doing it. My life, my terms. I don't bother with shit I don't like.

If I work for myself, I'm to blame if I'm always miserable. (Apart from the extenuating circumstances where choice is removed.) So I'm very intentional about what I do and what I don't do. If I'm going to work for myself, it'll go a lot better if it's in a way that suits me. It will also last much longer if it's enjoyable (I just passed my 17th year working for myself in February).

All too often, well-meaning experts tell us what we should do, and how we should do it. They tell us it'll help us in the long run, or make us bags and bags of money, or set us up for success. Advice can be great when we need to learn how to do something. The problem is that there's pretty much a gazillion ways to do anything. Especially when it comes to working for yourself or freelancing, and thinking about things like building products, finding clients, building audiences, making money, etc.

It's not enough to blindly follow advice/best practices or the way someone else does their own shit. There also needs to be an internalization step where you ask yourself some (sometimes tough) questions:

The other thing to consider is that you don't need to be happy 100% of the time with your work to enjoy your work. I can be stressed about one project deadline, or disagree with a client about a small change request, or be on my computer working when I'd rather be hiking in the woods some days, and still like freelancing. But if more things went to the other side of the ledger all the time, I'd have to sit down and reevaluate.

Think about why you don't want to do something. What's the reason behind your hesitation? If it's just a fear of something new or something that will push your limits, that's an awful reason not to do something. Typically it's those scary things that lead to the most growth. But if it's simply a lack of interest or the fact that something just isn't your style or you can't stand behind something, then there's a problem. Then that's truly shit you don't like.

Working for yourself isn't just about the money and success, it's about crafting a life for yourself you actually, really enjoy. It's about aligning the values of others with your own. If working for someone else gave me that, I'd drop all my shit right this second and get a "job." Because it's not, working for someone else falls into the shit I don't like pile. I don't care if I could make more money, be famous, or anything else -- I don't do shit I don't like. It's a tougher road, for sure, but a more fulfilling one to me. I don't want to be at the end of the road, only to realize I was living someone else's life.

If you hate doing something, but do it anyway just because you think it'll help in the long run, you might want to think again and think hard about it. You'll start to cultivate some self-knowledge and direction to move you toward doing your own shit, on your own terms.

Advice Freelance Freelancing Choice
This Blogger's Books and Other Items from... 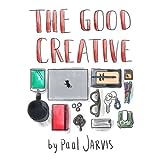 Everything I Know
by Paul Jarvis